Side-winding is a gait specific to sand snakes and features some advantages that make it desirable for robots’ locomotion: stability, big speed, low energy consumption and suitable for granular terrain. So far, the gait has been successfully implemented on snake robots like Lola-OP. The aim of this project was to port the side-winding gait from the snake robots to Pleurobot salamander-like robot from Biorob. To that purpose, the similarities and dissimilarities between Lola-OP and Pleurobot were considered. The side-winding gait in the snake robots is made up of two traveling waves: one horizontal and one vertical, their spines having the capabilities of moving on these two axis. However, in Pleurobot the spine can only bend horizontally and in addition there are 4 limbs each having 4 degrees of freedom that can be used. So, the main challenge was to design the joints trajectories of the limbs and coordinate it with the spine’s traveling wave in order to obtain a side walk similar to the side-winding in snake’s locomotion.

Three different ways of using the limbs were designed, implemented, tested and evaluated: 1-using a state machine to coordinate the limbs while describing skew trajectories similar to the tracks that snakes leave in the sand, 2-stepping sideways while synchronizing with the spine’s maximum bending at the girdles, and 3-applying sinusoidal functions in the limbs’ joints to produce a vertical wave and displacement. Finally, the second approach proved to be the best among all and compared to the case in which the spine is not used at all, the speed of the robot was up to 3 times higher, depending on the spine’s wave amplitude. Also, the use tail proved to be beneficial. 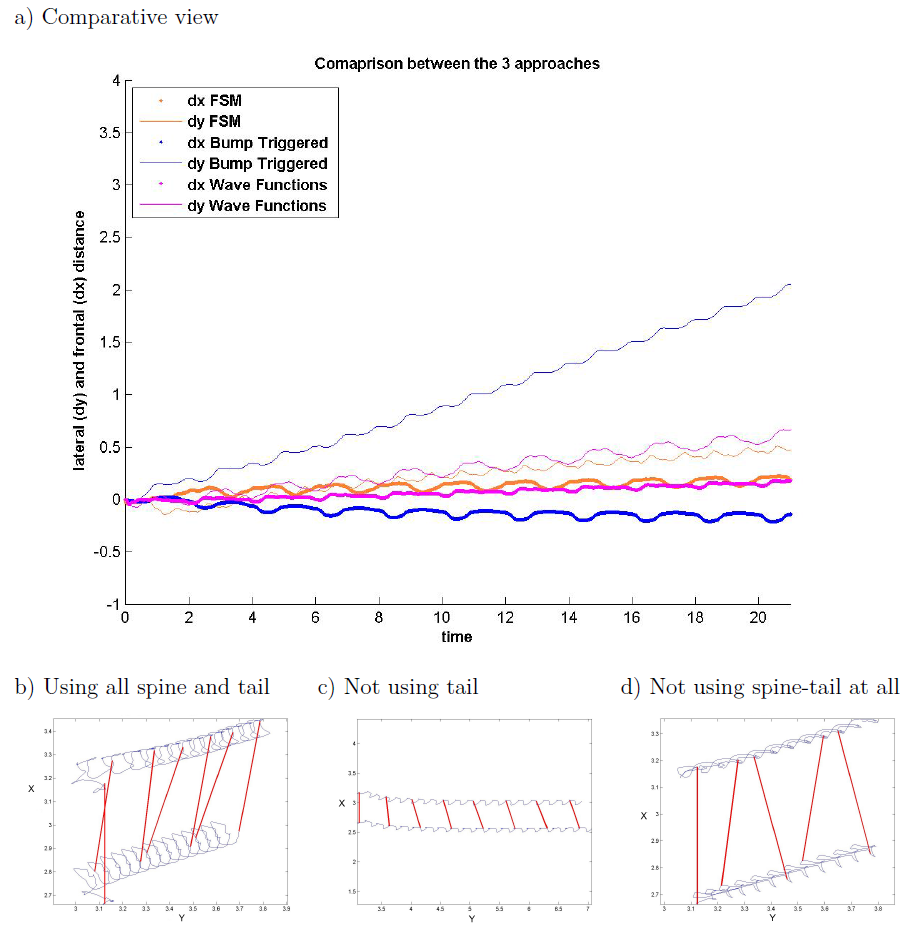 Full report can be found here

Pleurobot’s “side-winding”, state machine control (right click and save as)

Pleurobot’s “side-winding”, half spine IK control (right click and save as)