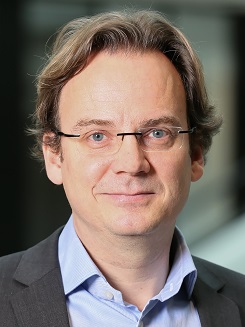 Auke Ijspeert is a full professor at the EPFL (the Swiss Federal Institute of Technology at Lausanne), and head of the Biorobotics Laboratory (BioRob). He has a B.Sc./M.Sc. in physics from the EPFL (1995), and a PhD in artificial intelligence from the University of Edinburgh (1999). He carried out postdocs at IDSIA and EPFL, and at the University of Southern California (USC). He then became a research assistant professor at USC, and an external collaborator at ATR (Advanced Telecommunications Research institute) in Japan. In 2002, he came back to the EPFL as an SNF assistant professor. He was promoted to associate professor in October 2009 and to full professor in April 2016. His primary affiliation is with the Institute of Bioengineering, and secondary affiliation with the Institute of Mechanical Engineering.

His research interests are at the intersection between robotics, computational neuroscience, nonlinear dynamical systems, and applied machine learning. He is interested in using numerical simulations and robots to get a better understanding of animal locomotion and movement control, and in using inspiration from biology to design novel types of robots and locomotion controllers (see for instance Ijspeert et al Science 2007, Ijspeert Science 2014, and Nyakatura et al Nature 2019). He is also investigating how to assist people with limited mobility using exoskeletons and assistive furniture.

He is an IEEE Fellow, member of the Board of Reviewing Editors of Science magazine, and associate editor for the IEEE Transactions on Medical Robotics and Bionics and for the International Journal of Humanoid Robotics. He has acted as an associate editor for the IEEE Transactions on Robotics (2009-2013) and for Soft Robotics (2018-2021). He was a guest editor for the Proceedings of IEEE,  IEEE Transactions on Biomedical Engineering, Autonomous Robots, IEEE Robotics and Automation Magazine, and Biological Cybernetics. He has been the organizer of 7 international conferences (BioADIT2004, SAB2004, AMAM2005, BioADIT2006, LATSIS2006, SSRR2016, AMAM2019), and a program committee member of over 50 conferences. Please visit the BioRob Home and BioRob publication pages for more information about his research and publications (See also Ijspeert’s Google Scholar Profile).

Current and Past Funding