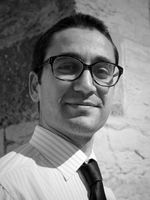 Behzad Bayat has a B.Sc. degree in electrical engineering (2004) and M.S. degree in automation and instrumentation engineering. He has contributed to several European projects (such as GREX, MORPH, Co3AUVS, and CADDY) while working as a Research assistant with the Institute for Systems and Robotics (ISR), Instituto Superior Técnico (IST), Lisbon, Portugal, from 2007-2015. He received his Ph.D. degree from Instituto Superior Técnico (IST), University of Lisbon, Portugal, in Electrical and Computer Engineering (2015). He joined BioRob Lab. in June 2015 as a post-doctoral researcher contributing to Envirobot project as well as manufacturing and exploring different bio-inspired swimming robots.