Magnetically confined plasmas are subject to turbulence, which has been observed in virtually all experiments to lead to transport of heat, particles and momentum at much higher levels than due to particle collisions alone. Understanding and predicting turbulence is thus crucial in the context of magnetic fusion research, and our aim is to do it from first-principles.

Plasmas of interest have very high temperatures and very low densities, thus low collisionalities: the mean free path is much larger than the system size. Thus the physics is dominated by collective phenomena (or wave-particle interactions) which are best described with kinetic theory, involving particle distribution functions in a 6D (3D real, 3D velocity) phase space.

Turbulent fluctuation frequencies are typically much lower than the cyclotron frequency of plasma particles. Thus, the basic idea of gyro kinetic theory is to “average out” over the gyration motion of particles. In other words, a phase space coordinate transformation is made, resulting in a reduction of the dimensionality from 6D to 5D.

Even with this reduction, solving the set of gyrokinetic equations is a rather formidable task. These consist in a PDE for the time evolution of the distribution functions in 5D, a set of 5 coupled ODEs for particle orbits, and 3D integral-differential equations for the electromagnetic fields. There are several nonlinearities in the system and the background geometry of the magnetic configuration is nontrivial. The presence of this magnetic field is the cause of a very strong anisotropy in the perturbations.

Several numerical methods are used to solve these equations. The complexity of the problem implies that huge computational resources and massive parallelization of the algorithms are required. Advanced, High Performance (HPC) techniques are applied and the numerical codes are run on some of the most performing platforms to which we can have access.

Our research aims at improving the physics description by including more and more effects such as non-adiabatic electron response, finite size and finite collisionality. This requires constant improvements on the numerical codes developments in order to further optimize them, improve their parallel scalability and thus have them ready for the next generation of HPC platforms.

The main HPC platforms on which our codes are run are:

The present research is partly funded by the Swiss National Science Foundation and by the PASC project. It is part of the Euratom – Swiss Confederation Association Work Programme. 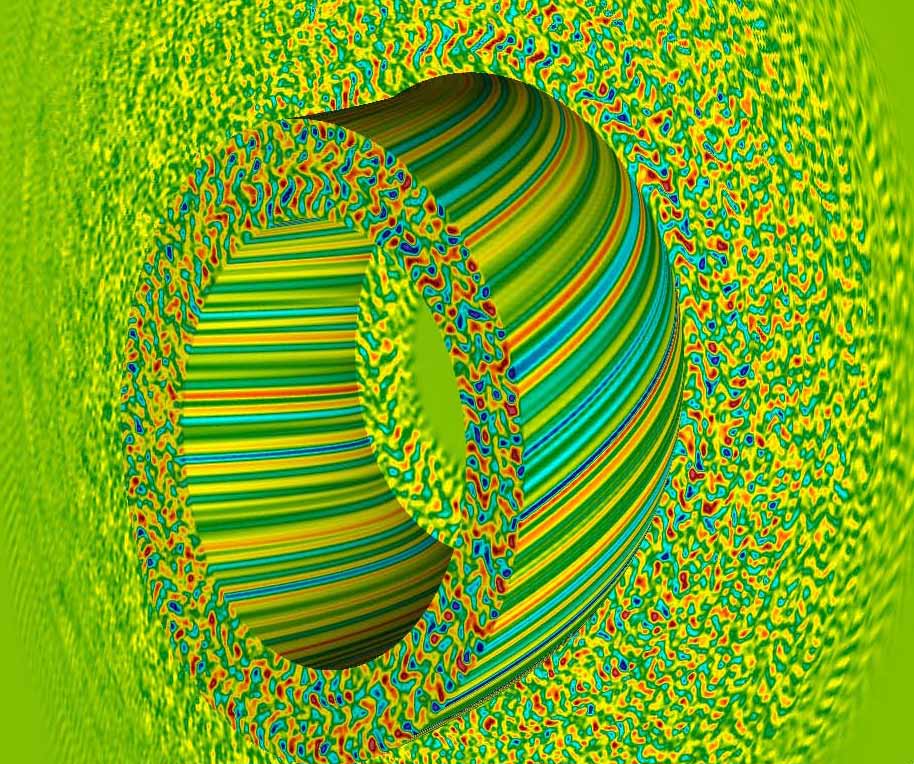 Contours of perturbed density computed from a global gyrokinetic simulation of ITG turbulence in ITER with the ORB5 code, using 1 billion particles and 1 billion grid points.