An essential step in the characterization of the turbulence in plasmas is the determination of the nature of the underlying (linear) instabilities and waves. Considerable efforts have been dedicated to this investigation on TORPEX, based upon detailed measurements of the wave dispersion relation both along and across the magnetic field. We discover that the nature of the dominant instabilities is controlled by the value of the vertical magnetic field, Bv, relative to that of the toroidal field, BT. We observe a clear transition from a regime dominated by instabilities with finite parallel wave number to one dominated by pure interchange instabilities, with zero parallel wave number, as the value of the vertical field intensity, used as control parameter, is increased.

Following these findings, three-dimensional global fluid simulations have been run in the nonlinear regime, to confirm the linear interpretation. Three turbulence regimes have been found: an ideal interchange mode regime, a previously undiscovered resistive interchange mode regime, and a drift-wave regime. As the pitch of the field lines is decreased, the simulations exhibit a transition from the first regime to the second, while the third, the drift-wave regime, appears to be accessible only for very low collisionality values.

In regimes with low microwave power, on which the experimental efforts have been concentrated in recent times, the interpretation of the underlying instability as either resistive or ideal interchange has been quantitatively confirmed (see figure below). Here the pitch of the magnetic field is expressed in terms of N, the total number of field line turns from the bottom to the top of the vessel. The pitch decreases as N is increased, and the onset of finite k fluctuations is observed for sufficiently large N (N ~ 7). [Ricci PRL 2010] 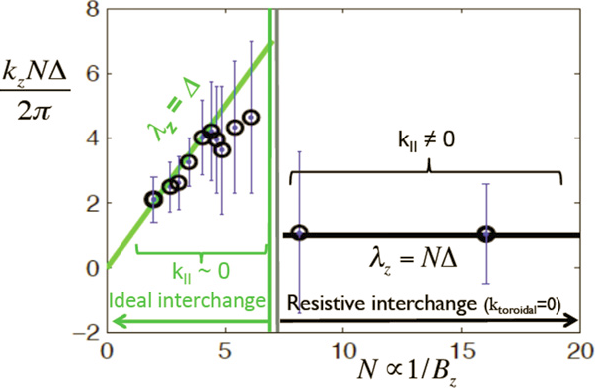