In magnetic confinement devices for fusion , a large fraction of plasma particles and energy is efficiently transported across a confining magnetic field in the form of blobs . These are coherent structures of enhanced plasma pressure relative to the background plasma, which have a filamentary structure, as they typically extend much further along the magnetic field than perpendicular to it. Blobs are universally observed in the edge of virtually all magnetized laboratory plasmas.

In TORPEX, the blob formation mechanism and their dynamical properties have been extensively studied. First, we have undertaken an extensive investigation of blob formation and dynamical evolution in TORPEX, taking advantage of its full diagnostics access with adequate spatial and temporal resolution. The movie on the left shows conditionally sampled time-resolved profiles of electron density that have been used to reveal the dynamics of blob formation and ejection. Blobs originate from crests of ideal interchange modes, forming radially elongated structures that are sheared off by the surrounding ExB flow [Furno PRL 2008] 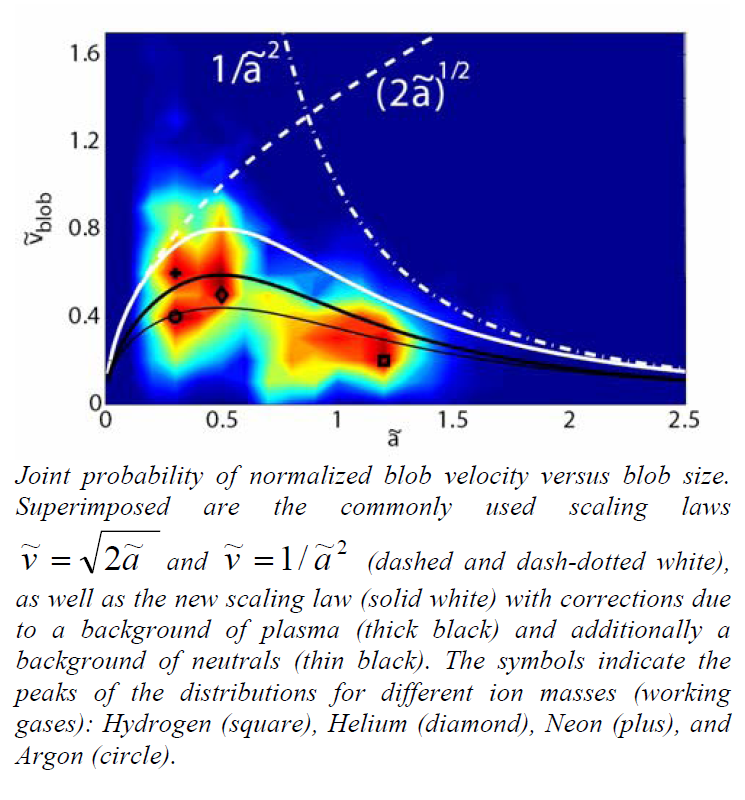 Next, we have focused on the propagation properties of blobs once they are formed. The goal was to identify and quantify the different physical effects that determine the blob cross-field velocity and, ultimately, to develop methods to influence blob motion and hence cross-field transport. A comparison with published theoretical studies on blob motion suggests that the electrical polarization of the blob, which causes its propagation, is damped both by cross-field currents and by parallel currents. The relative importance of parallel versus perpendicular currents depends on the normalized blob size, which we can vary in the experiment by changing the ion mass. We have derived a generalized analytical expression for the blob velocity, which takes into account parallel and cross-field currents as well as damping due to the neutral gas background [Theiler PRL 2009] . The generalized scaling law shows quantitative agreement with our experiments, as shown in the figure on the right, and also retrieves previous theoretical scalings used in the tokamak community.