The HV-EPSA project is currently evaluating the feasibility and interest in implementing high voltages in the range 300-600 V. This could be required to supply new generators of Hall thrusters or ion thrusters. Moreover, a high-voltage accessibility would provide multiple advantages. It would give the possibility to improve the power efficiency by reducing the operating currents in the power lines, and therefore reducing the ohmic losses. Lower power system costs would result, with a target of 30% cost reduction. At the same time, substantial mass savings could be attained, by keeping the same current but reducing the wire cross section, with a target of 50% mass reduction.

In satellite, gas can be formed from satellite material degassing, exhaust gas of position adjustment propellant rockets, micro-meteorites or phase transitions for temperature variations from shadow to Sun. Ions could be present on satellites due to electric propulsion systems (ion thrusters) or to the interaction with a wide variety of natural plasmas, such as the solar wind and the ionosphere plasma. In Low Earth Orbit (LEO), at approximately 160-200 km, a high density (ne = 103 – 106 cm-3), low energy (Te = 0.5 – 2 eV) plasma is present. In Geosynchronous Orbit (GEO), at 35786 km, a low density (ne = 0.1 – 1 cm-3), high energy (Te = 0.5 – 10 keV) plasma is present. When the spacecraft interact with a plasma, a floating potential drift takes place: some parts of the device could be charged to extremely negative voltages relative to the ionosphere (up to 100 V). This would attract ions and enhance material sputtering, but most of all, it could determine electrostatic discharges (ESD).

Many satellites with bus voltages less than 75 V have suffered in orbit with severe degradation due to arcing on Solar Array (SA) and slip-ring assembly of solar array driving mechanism.
Arcing could happen between the electrical lines used to trasmit power from the SA to the electronic sequential switching serial, as well as in the slip-ring assembly. It is important for satellite applications to know if discharges could damage the material or simply produce power losses. In the resulting arcing events, the current would be only limited by the impedence of the external circuit, according to the current that can be sustained by the power supply.

The role of the Swiss Plasma Center and Ruag Nyon in the HV-EPSA project consists in the study and design of a system/technique to mitigate arcs in the slip-ring assembly of the satellite. 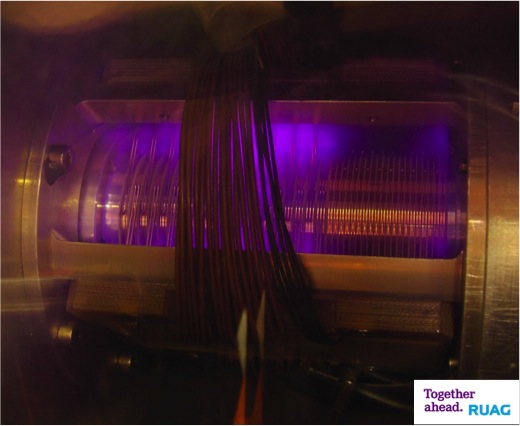