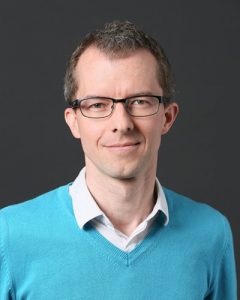 Felix Schürmann is adjunct professor at the Ecole Polytechnique Fédérale de Lausanne, co-director of the Blue Brain Project and involved in several research challenges of the European Human Brain Project.

He studied physics at the University of Heidelberg, Germany, supported by the German National Academic Foundation. Later, as a Fulbright Scholar, he obtained his Master’s degree (M.S.) in Physics from the State University of New York, Buffalo, USA, under the supervision of Richard Gonsalves. During these studies, he became curious about the role of different computing substrates and dedicated his master thesis to the simulation of quantum computing.

He studied for his Ph.D. at the University of Heidelberg, Germany, under the supervision of Karlheinz Meier. For his thesis he co-designed an efficient implementation of a neural network in hardware.