Context: Over the past decades, timber has gained popularity as a sustainable building material because of the rising environmental awareness. Furthermore, the resurgence of timber has also been encouraged by the advent of the digital age during the 21st century. The development of computer-aided design programming and digital fabrication tools has stimulated significant advances in both architecture and engineering. Within this context, researchers have shown a growing interest in wood-wood connections, inspired by traditional woodworking joints. Geometrically complex timber structures assembled with joints integrated in their plates have been developed using algorithmic geometry processing. However, although their design and fabrication have been automated, research focused on automated numerical tools for their structural analysis has been very limited.

This thesis is providing a design methodology for the structural analysis of timber plate structures composed of a large number of discrete planar elements and wood-wood connections. A finite element model, in which the semi-rigid behaviour of the connections is implemented using springs, is proposed. It is applied to a specific case study, namely the Annen Plus SA head office project in Manternach, Luxembourg, which consists of a series of double-layered double-curved timber plate shells. A design framework is introduced to automate the generation of the model and integrate structural analysis into the existing design and fabrication workflow.

The numerical model was built for both small- and large-scale structures through custom scripts and subsequently assessed through experimental investigations: first, laboratory tests were performed on small assemblies with simplified geometry; secondly, a displacement study was carried out onsite on a 24-metre span structure. Results obtained with the semi-rigid spring model were found to be in good agreement with experimental tests. The proposed model was therefore validated for the serviceability limit state. Furthermore, the semi-rigidity of the connections in translation as well as in rotation was shown to highly influence the model and is therefore crucial for the accuracy of the model. 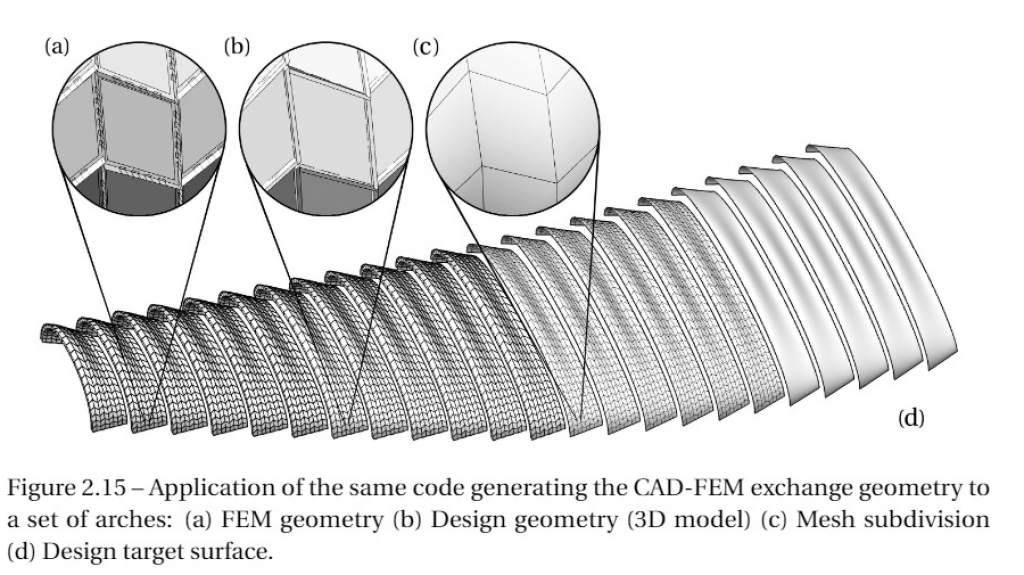 Based on experimental tests observations, an alternative structural system was proposed and compared to the initial one through numerical investigations within the proposed design framework. A significant influence on the structure’s performance was found, demonstrating the possibilities for structural optimisation.

Finally, a three-dimensional finite element model for wood-wood connections was investigated. It aimed to predict their semi-rigid behaviour, generally characterized through experimental tests, necessary for their implementation in global models. The material model was evaluated based on shear load tests performed on different engineered wood products. Stiffness and load-carrying capacity of the connections were approximated with numerical simulations. However, experimental tests remain necessary to precisely predict the behaviour of the joints.

This thesis highlights the importance of adopting an integrated design strategy encompassing engineering and fabrication aspects for geometrically complex timber structures, as well as establishing a link between local behaviour of the connections and global behaviour of the structure. The gained knowledge can facilitate the design and realization of large-scale freeform timber structures using wood-wood connections.

Link to the thesis