Traditional wood-wood connections, widely used in the past, have been progressively re- placed by steel fasteners and bonding processes in modern timber constructions with the standardization of the industry. However, the emergence of digital fabrication and innovative engineered timber products have offered new design possibilities for wood-wood connections, particularly for timber plate structures. The typical design-to-production workflow has evolved considerably over the last few decades, such that a large number of connections with various geometries can now be easily produced. These connections have become a cost-competitive alternative for the edgewise connection of thin timber panels. Numerous research studies on this topic have led to the realization of prototypes and pavilions, but this has mainly occurred for complex geometrical shapes. Several challenges remain in order to broaden the use of this specific joining technique into common timber construction practice: (i) prove the applicability at the building scale, (ii) propose a standardized construction system, (iii) develop a convenient calculation model for practice, and (iv) investigate the mechanical behaviour of wood-wood connections.

The first building implementation of digitally produced through-tenon connections for a folded-plate structure is presented in this work. Specific computational tools for the design and manufacture of more than 300 different plates were efficiently applied in a multi-stakeholder project environment. In addition to the laminated lumber veneer panels generally employed in previous research, cross-laminated timber panels were investigated for the first time, and the potential of such connections was demonstrated for different engineered timber products. Moreover, this work demonstrated the feasibility of this construction system at the building scale.

For a more resilient and locally distributed construction process, a standardized system using through-tenon connections and commonly available small panels was developed to reconstitute basic housing components, such as slab and roof elements. Based on a case-study with industry partners, the fabrication and assembly processes were validated with prototypes made of oriented strand board. Their structural performance was investigated by means of a numerical model and a comparison with glued and nailed assemblies. The results showed that through-tenon connections are a viable alternative to commonly used mechanical fasteners.
So far, the structural analysis of such construction systems has been mainly achieved with sophisticated, computationally expensive, and time-consuming finite element models, not in line with the simplicity of basic housing elements. A convenient calculation model for practice, which can capture the semi-rigid behaviour of the connections and predict the effective bending stiffness, was thus introduced and subjected to large-scale bending as well as vibration tests. The proposed model was in good agreement with the experimental results, highlighting the importance of the connection behaviour.

The in-plane behaviour of through-tenon connections for several timber panel materials was characterized through an experimental campaign to determine the load-carrying capacity and slip modulus required for calculation models. Based on the test results, existing guidelines were evaluated to safely apply these connections in structural elements while a finite element model was developed to approximate their performance. This work constitutes a firm basis for the optimization of design guidelines and the creation of an extensive database on digitally produced wood-wood connections.

Figure 1- (a) Developed construction system, (b) Picture of one specimen produced in the laboratory. 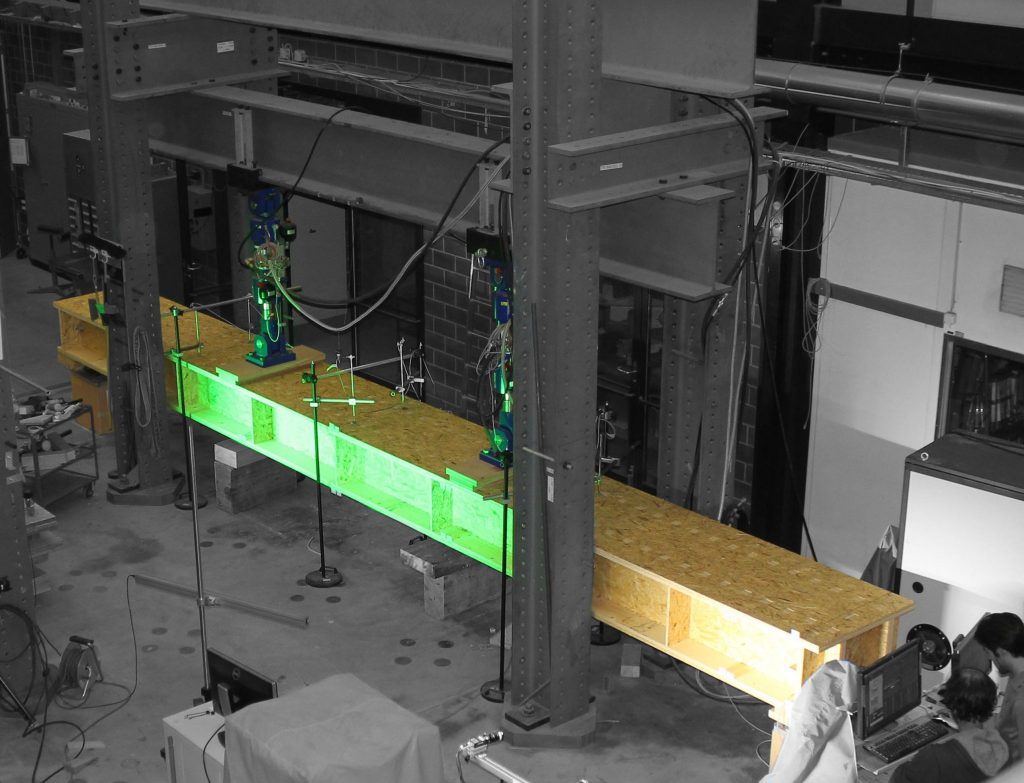