The concept of moral rights does not always exist as such in the legislation of common law countries (United Kingdom, United States, Canada and Commonwealth countries in particular), at least moral rights in these countries are sometimes transferable.

(freely available online, or on request in printed version at the Library desk) 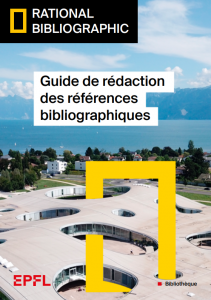 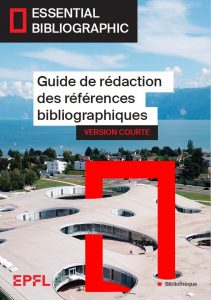 It is important to note that EPFL’s rules go beyond Swiss copyright law (LDA). In scientific and academic environments, both in Switzerland and abroad, the rules are stricter than in general society.

Citation allows readers to highlight the materials drawn from other publications and thus to distinguish these parts from the author’s personal and novel contributions.

“If the material originating from elsewhere is not clearly indicated in the work, the student allows the reader to think that it is their personal and original contribution. This amounts to cheating (plagiarism Art. 8). (Lex 3.3.3, section 2, art. 4).

Failure to respect the rules of citation is called plagiarism, which gives rise to the launching of an internal disciplinary procedure. Moreover, relying on duly documented and well-founded information gives credibility to the work. The originality of the work is then easier to highlight.

Finally, the references provided by the author, those which enabled the writing of the document, are useful for the readers who want greater insight into the subject. They are also essential for proofreaders to check the reliability of the sources used.

A citation has to satisfy the following three points:

By plagiarizing, a student exposes himself to penalties that can range from a zero grade for his paper to, in repeated cases, exclusion from the school. In the case of a PhD candidate, plagiarism is punished more severely than for a Bachelor’s or Master’s student and can lead to the expulsion from doctoral studies, even without precedent. Plagiarism detected at a later time can lead to the revocation of the doctoral degree. EPFL uses software to monitor work for plagiarized elements.

The consequences that plagiarism can have for a researcher are defined in an EPFL directive:

Other consequences : plagiarism brings discredit to its author, which has repercussions on his research team, negates the value of the work carried out and brings disgrace on the institution involved. It may also give rise to external procedures.

Victims of acts of plagiarism are advised to contact the offender or the institution the offender isaffiliated to, in order to call attention to the offense and to request rectification. If the offender does not abide, he or she can be prosecuted if the copyright holder presses charges (LDA, art. 67-73). The plagiarist can be fined, and if the author can provide evidence of financial losses incurred because of the event, the plagiarist can be required to compensate for these. If a member of the EPFL is involved, EPFL’s disciplinary law applies. In this case, [email protected]should be contacted.

More information for your profile