Skip to content
The main work hypothesis of the SCCER-FURIES lies on the 2011 decision of the Swiss Federal Council and Parliament to phase-out Swiss nuclear power plants. In view of this decision, the Federal Council has developed a long-term energy policy known as “Energy Strategy 2050” that provides the basis of revised energy perspectives for the decades to come.
In 2010, the situation concerning the Swiss electricity demand and production was the following: 60 TWh of domestic electric energy consumption with a domestic production and consumption overall balanced over the year. The domestic production of electricity was divided as follows: 56.5% hydro (34 TWh), 38.1% nuclear (23 TWh) and 5.4% other (3 TWh).
The 2050-horizon working assumptions of the SCCER-FURIES are the following: (i) no changes in the consumption profile are expected to bring the overall demand to 84 TWh, therefore it is expected to reduce the electricity demand down to the current value of 60 TWh (i.e., a compression in the demand of 24 TWh); (ii) increase the hydro to 36 TWh and (iii) compensate the remaining 24 TWh by means of new renewable energy resources predominantly from photovoltaic and wind. These conditions are depicted in Figure 1. 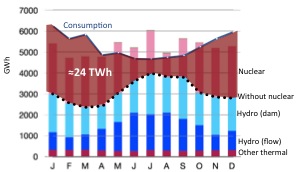 In view of the above-described work-hypotheses, it is possible to identify two major challenges. The first one refers to enabling the vast connection of non-dispatchable stochastic renewable energy resources essentially in electrical distribution networks. The second one refers to the control of the demand. As a consequence, the above challenges involve a radical change in planning and control approaches of the whole Swiss power system.
In this respect, the SCCER FURIES aims to study new solutions to the above scientific, technical and environmental aspects in order to satisfy the requirements of the Switzerland Energy Policy 2050.
The contribution to the realisation of the Swiss Energy Strategy 2050 refers to the following points :
1. The outcomes of this project will enable the development of massive distributed generation, which constitutes an essential element in the portfolio of resources required to gap the electrical energy deficit.
2. The proposed solutions will guarantee reduced grid costs associated to the massive connection of distributed generation.
3. The studied solutions will improve the reliability of the whole electrical system in presence of large stochastic generation.
Due to the complexity, the novelty and the multidisciplinary aspects of the above challenges, the proposed SCCER will address four main themes structured in respective interlinked WPs: (1) Regional multi-energy grids, (2) Bulk multi-energy grids, (3) Multi-terminal AC-Dc grids and power electronics, (4) Grid components. These WPs are interconnected and intergaces with the other SCCERs.