David Atienza, professor at the School of Engineering and Head of the Embedded Systems Laboratory (ESL), has received with his co-authors the IEEE/ACM ICCAD Ten Year Retrospective Most Influential Paper Award for the scientific publication entitled « 3D-ICE: Fast compact transient thermal modeling for 3D-ICs with inter-tier liquid cooling ».

Presented at the IEEE/ACM International Conference on Computer-Aided Design (ICCAD) 2010, the research from professor Atienza and his team at ESL, in collaboration with IBM Zurich, on the design of open-source 3D Interlayer Cooling Emulator (3D-ICE) tool: 3D-ICE for compact transient thermal modeling of 2D/3D multi-processor system-on-chip (MPSoC) with liquid-cooling and other cooling technologies, has been awarded the ICCAD 2020 Ten Year Retrospective Most Influential Paper Award.

This work was used in the design of Aquasar (the first chip-level water-cooled server by IBM), and 3D-ICE is currently a popular open-source tool used by more than 1500 scientific teams (both industry and academia) around the world. More information on this work and latest results can be found on ESL’s research line page here: Thermal, power and performance aware design of 2D/3D system-on-chip architectures

The IEEE/ACM ICCAD’s Ten Year Retrospective Most Influential Paper Award is given to the paper considered to be the most influential in research and industrial practice in computer-aided design over the ten years since its original appearance at ICCAD. As part of the recognition, the authors of the publication receive 1,000 USD to honor this accomplishment. 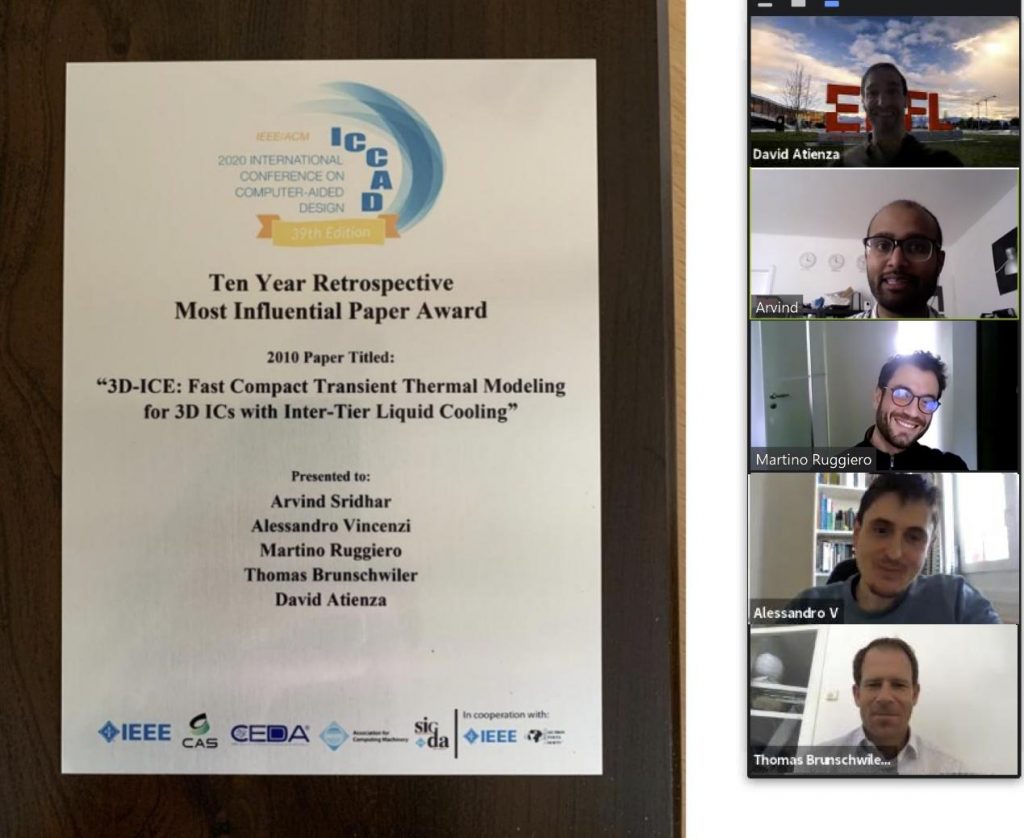 Three dimensional stacked integrated circuits (3D ICs) are extremely attractive for overcoming the barriers in interconnect scaling, offering an opportunity to continue the CMOS performance trends for the next decade. However, from a thermal perspective, vertical integration of high-performance ICs in the form of 3D stacks is highly demanding since the effective areal heat dissipation increases with number of dies (with hotspot heat fluxes up to 250W/cm2) generating high chip temperatures. In this context, inter-tier integrated microchannel cooling is a promising and scalable solution for high heat flux removal.

A robust design of a 3D IC and its subsequent thermal management depend heavily upon accurate modeling of the effects of liquid cooling on the thermal behavior of the IC during the early stages of design. In this paper we present 3D-ICE, a compact transient thermal model (CTTM) for the thermal simulation of 3D ICs with multiple inter-tier microchannel liquid cooling. The proposed model is compatible with existing thermal CAD tools for ICs, and offers significant speed-up (up to 975x) over a typical commercial computational fluid dynamics simulation tool while preserving accuracy (i.e., maximum temperature error of 3.4%).

In addition, a thermal simulator has been built based on 3D-ICE, which is capable of running in parallel on multicore architectures, offering further savings in simulation time and demonstrating efficient parallelization of the proposed approach.