Description
At the molecular scale, a delicate interplay of intermolecular forces and self-organization controls the sorption and transport of organic pollutants in complex materials such as natural waters or biological phases. As a result, different pollutants associate very selectively with different environmental phases, having pivotal consequences for their ecological impact and eventual fate. Computational models describing the energetic landscape of pollutant interactions with these environmental solvents and sorbents are currently a critical scientific need.

The goal of this project is to build an automated algorithm for quantum chemical predictions of hydrogen bond binding energies. This algorithm will test a quantum chemical model recently developed within the LMCE research group, to predict the free energies of hydrogen bonding interaction between organic pollutants and complex environmental materials. The results will be incorporated into a larger modeling framework designed for widely general predictions of organic pollutant solvation energies in environmental phases.

In hydrology it is crucial to understand the atmospheric flow dynamics over mountainous terrain to predict accurately the heat exchanges and the evaporative fluxes at the regional scale. These land–atmosphere interactions are driven by thermal circulations that take place over a strong diurnal cycle. During the day, the winds travel up the mountain slopes and at night, they travel down toward to the bottom of the valley. Little is known about how the transition between these two regimes takes place over steep slopes. The Slope Experiment at La Fouly (SELF) in the Swiss Alps was designed to investigate these transition periods throughout summer 2010. Throughout the campaign, several stations were deployed on the slope to measure the land-atmosphere exchanges. Among others, fifteen stations monitoring the surface temperature were aligned on the slope transect, thus covering an impressive range of slope angles (20 to 45 degrees). On several clear-sky days, additional instruments were deployed as part of intensive observation periods (IOPs). During the transitions of the IOPs, the slope was continuously monitored with high-resolution optical and thermal cameras each recording 7 frames per second. The main objective of the student’s project was to correlate the data collected by the optical-camera system with the wind measurements taken by several meteorological stations. The main challenges were the handling of extensive amounts of data, the quality control of field measurements and the synchronization between the different sensors.
The results, presented in the form of an animation, showed how the surface temperature responded instantaneously to the decrease in solar radiation in the evening. The animation also showed how the atmosphere went in a quiescent stage (very low turbulence levels) for approximately 30 min after the surface became shaded. Eventually, with a buildup of stable stratification, the wind directions shifted by 180°. Overall, this animated sequence of changing environmental parameters is a very powerful tool for the community of mountain meteorologists as it helps to understand the time scales involved in the evening transition of slope wind systems.
Animations Val Ferret 01.09.2010 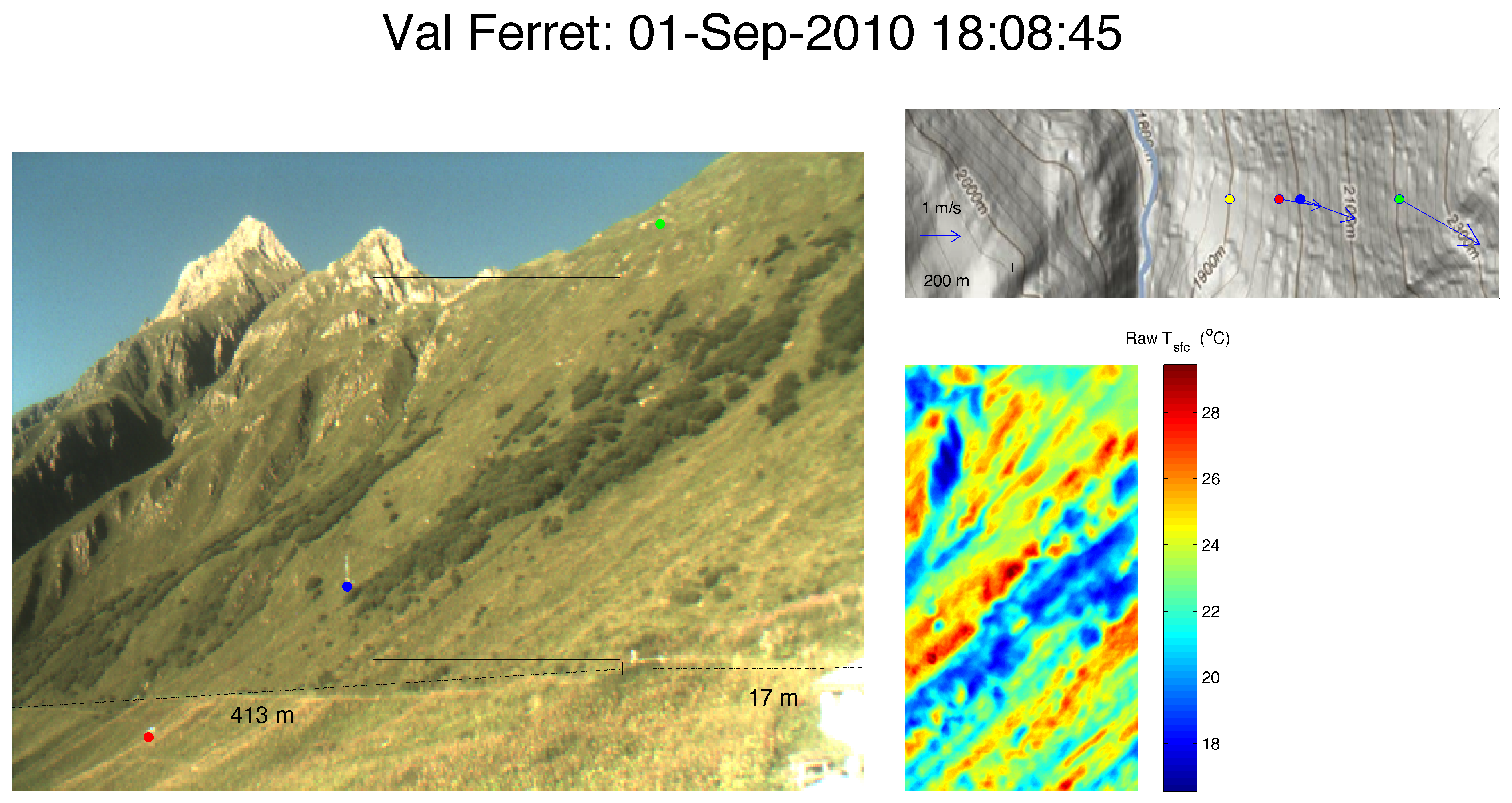 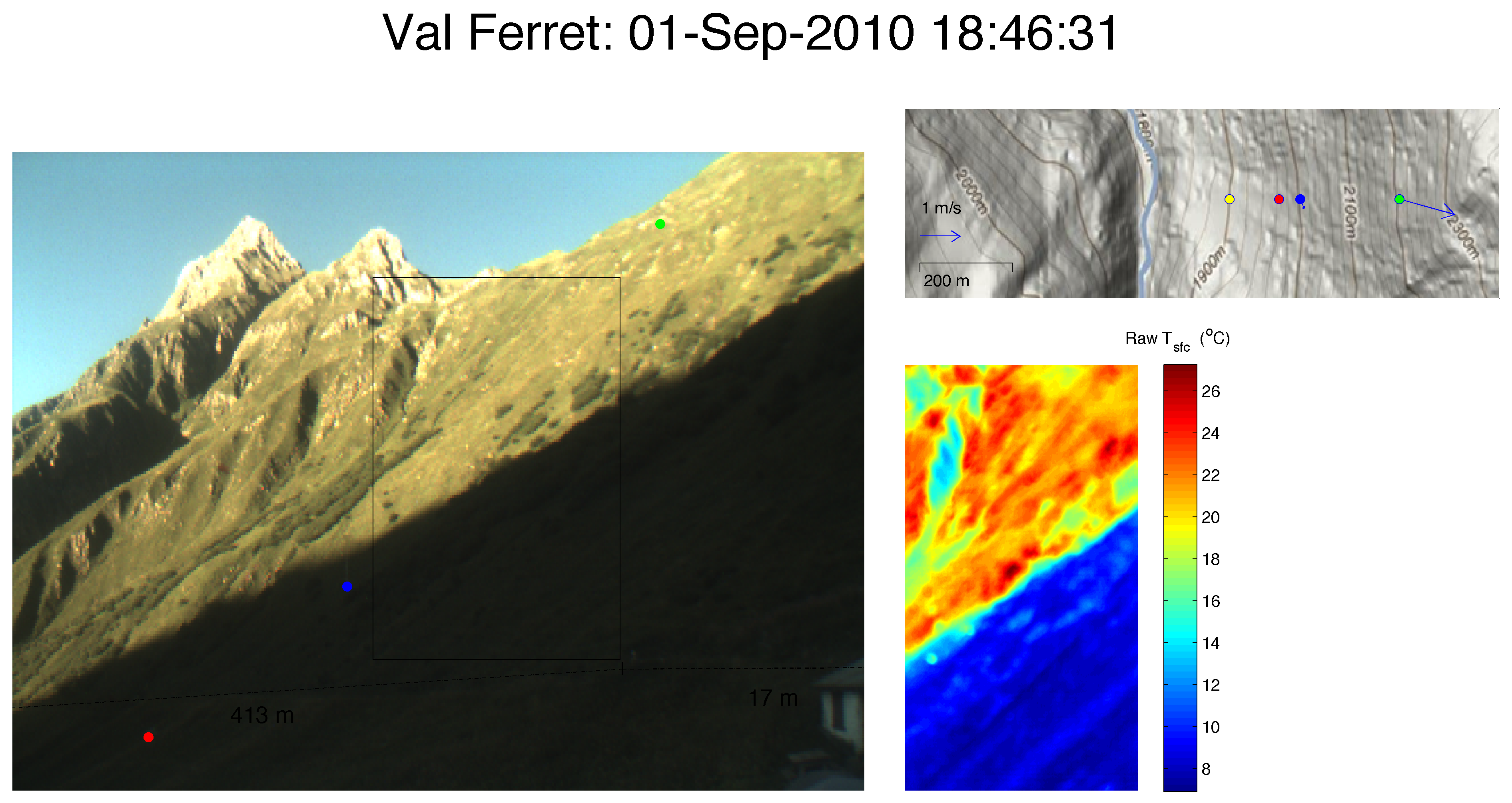 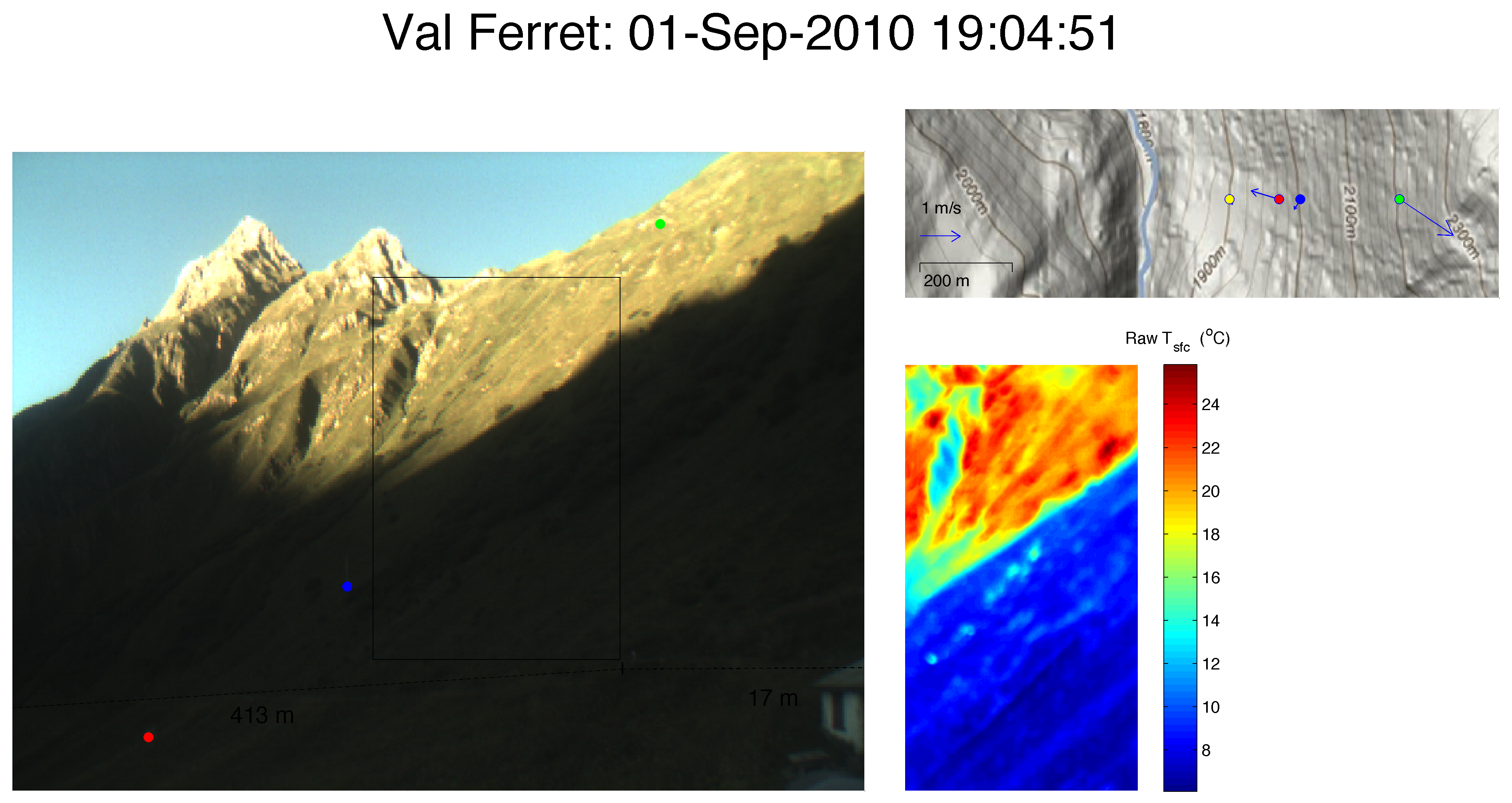 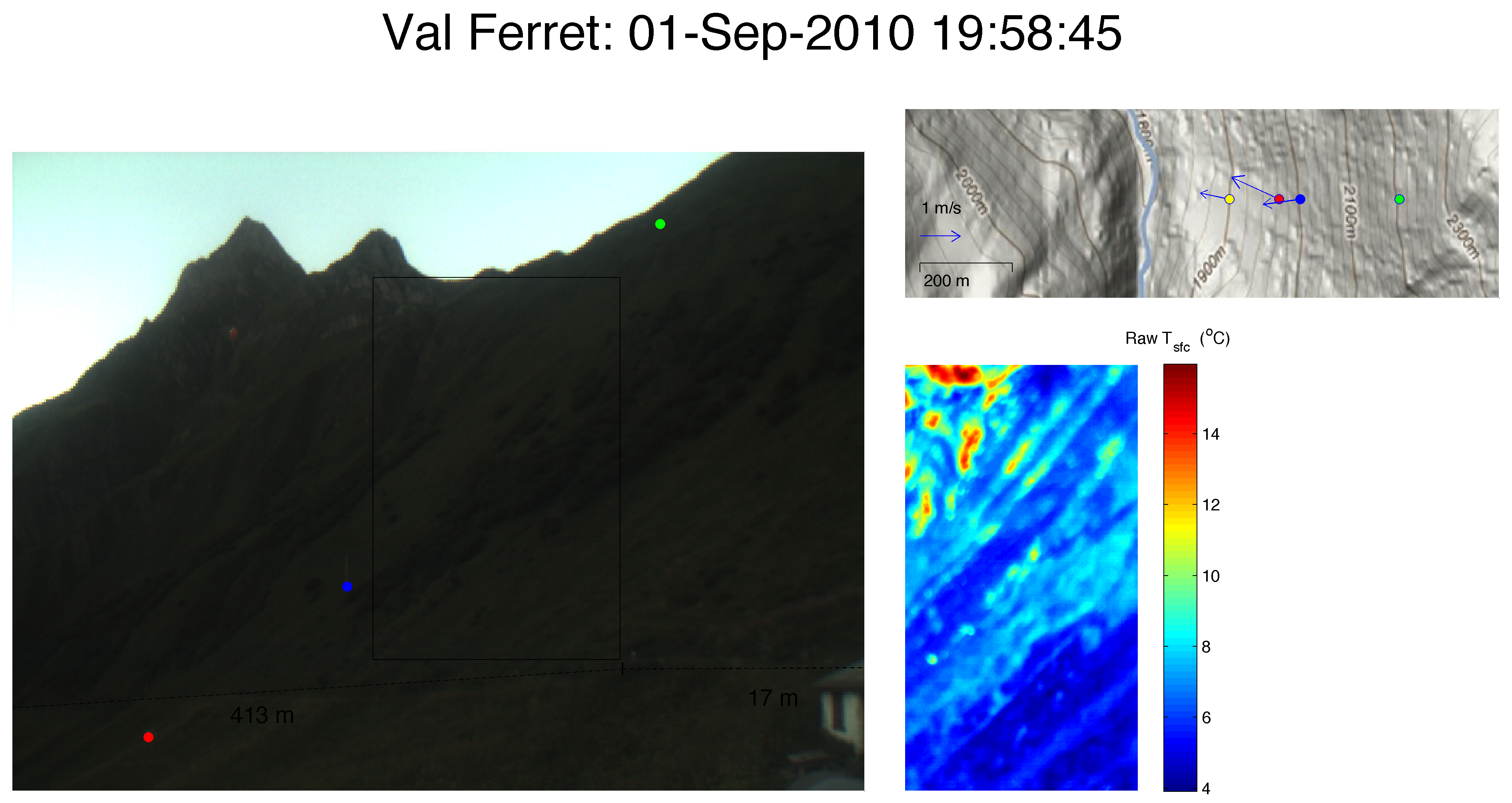 Abstract
Self-assembly is the autonomous organization of components into patterns or structures without human intervention. Self-assembling processes are common throughout nature and technology. They involve components from the molecular (crystals) to the planetary (weather systems) scale and many different kinds of interactions. The concept of self-assembly is used increasingly in many disciplines, with a different flavor and emphasis in each.

We are currently looking for innovative methods for modeling the in-fluid self-assembly of micro scale components into complex, hybrid MEMS devices. The challenge posed by this task is two-fold: (1) one needs to account for the spatiality of the process (i.e., the position and the orientation of the building blocks with respect to each other and the geometrical features of the environment), and (2) self-assembly processes are intrinsically distributed and multi-scale, i.e., the involve a large variety of time- and length-scales, which need to be captured by the models.

Since we have known the basic features of the self-aggregate, we can explore more and deeper by designing the aggregation. In this project, we design two algorithms: symmetric algorithm and generic algorithm, which use local grammar to achieve square aggregation. The yield of these two algorithm are 97.3%, 89.8% at least one square and 49.9%, 22.9% with two squares. From the result we can see that the high scalability is base on the sacrifice the yield. We also introduce a randomly check of the connectors method to see whether it will have a higher yield, but it doesn’t work for many reasons. 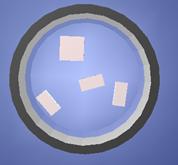 Aggregation into a square

Abstract:
Many engineering applications of contact and friction involve various physical processes like elasticity, plasticity and thermal transfer across different length and time scales. Continuum mechanics with numerical techniques such as Finite Elements (FE) has been successfully used to solve problems at macro length scales. But on the other hand continuum theories fail to capture details at the atomistic length scales and therefore we have recourse to atomistic based simulations such as Molecular Dynamics (MD). However, due to the time and length scales a limitation of MD, there is a strong research need for developing multiscale models that couple FE with MD.
The objectives of this project are twofold. First, a generic (continuum) heat transfer model based on Fourier’s Law will be implemented within an object oriented finite element open source framework called AKANTU developed at the Computational Solid Mechanics Laboratory (LSMS). The implemented model will be useful to study both steady state and transient heat transfer problems. This work has to be validated by simulating various example problems such as thermal transfer in 3D cube. Second, I have reviewed current approaches for coupling a continuum description of heat transfer to an atomistic (Molecular Dynamics) description.
Some of the numerical results are shown below: 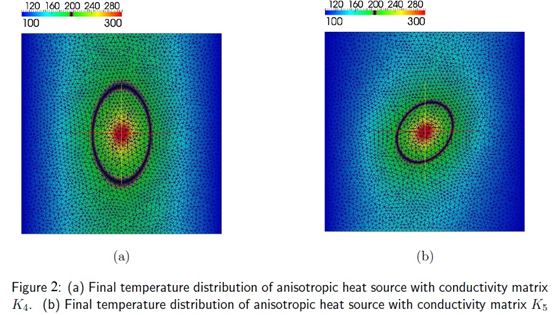 Figure 1: Stochastic Simulations of the MAPK cascade over 1000 s.

With the goal of achieving superior insight into the functioning of cellular signals, the systems biology community has been gradually increasing the realism and precision of its numerical simulations of cellular processes. After an initial period that saw the rise of continuous methods of approximation using systems of diﬀerential equations, the saga took an interesting turn when it was noticed that the continuity assumption underlying this dominant approach was far from being biologically valid. On the contrary, trace amounts of a single large biomolecule could have untold eﬀects on larger signaling networks. As a result of this realization, the attention of the community gradually shifted towards stochastic methods that would take the inherent variability of these systems into account.
This project, following on the work of a master’s thesis completed in 2010 by Alen Brusjnak, attempts to simulate the tricyclic MAPK cascade, one of the most well-researched signaling cascades of the mammalian cell, using fully-stochastic methods. The results are analyzed in terms of the system’s ultrasensitivity. Much work remains to be done on this topic, but the paper concludes with some early ﬁndings that seem to conﬁrm the inherent complexity of these signaling mechanisms. Below are some of the graphical results from the study.

for diﬀerent values of Michaelis-Menten constants

Cardiovascular diseases motivate the research community to model and simulate the entire human vascular system. However, a detailed description of all the components in the network is unfeasible due to computational limitations. The geometrical multiscale approach is a strategy that can be used to overcome this problem. In a geometrical multiscale framework three-dimensional models are used to model speciﬁc components where a detailed description of the ﬂow ﬁeld is required. The remaining arterial vessels are usually accounted through one-dimensional models. Finally, the problem is closed by zero-dimensional lumped parameter models, which accounts for the peripheral circulation.