Abstract
During my master’s project at the University of Texas Southwestern Medical Center, I worked as a bioinformatician for the Herz and Yu labs, both of which collaborate on research related to neurodegenerative disease. The main project consisted in analyzing large RNA-sequencing datasets by aligning millions of RNA reads to mammalian genomes, deducing gene expression levels from these alignments, using statistical tests to assess the amount of alternative splicing and differential expression in important genes, and using clustering and gene ontology techniques in R and other statistical computing environments to obtain insight into disease mechanisms. This approach was applied to murine models of amyotrophic lateral sclerosis (ALS), Alzheimer’s disease, and frontal temporal lobar dementia (FTLD). Results from these analyses may lead to new insights in how to treat these neurodegenerative diseases.

Abstract
Measuring and monitoring environmental fields, such as temperature, humidity, pollutant concentration or even radioactivity is important to understand and to manage the environment. To achieve such a goal, sensor networks are a very powerful tool. However, sensor readings are only valid locally and data in between the sensor nodes are obtained by interpolation. Particularly, in the case of environmental sensor networks, nodes may be deployed in areas with limited access, and further the ideal node distribution is often unclear at deployment time. As a result, interpolation between nodes may under some conditions give a poor picture of the underlying environmental processes. We are exploring the advantages of a small number of mobile nodes (e.g., miniature helicopters) may bring to an otherwise static sensor network.

What path should the mobiles nodes follow to maximize the utility of their travel time? To answer this question we consider a single mobile device and we assume that the path of this mobile device is computed by a base station that has access to the data measured by both static and mobile sensors. We also assume that the field does not change during a single flight. 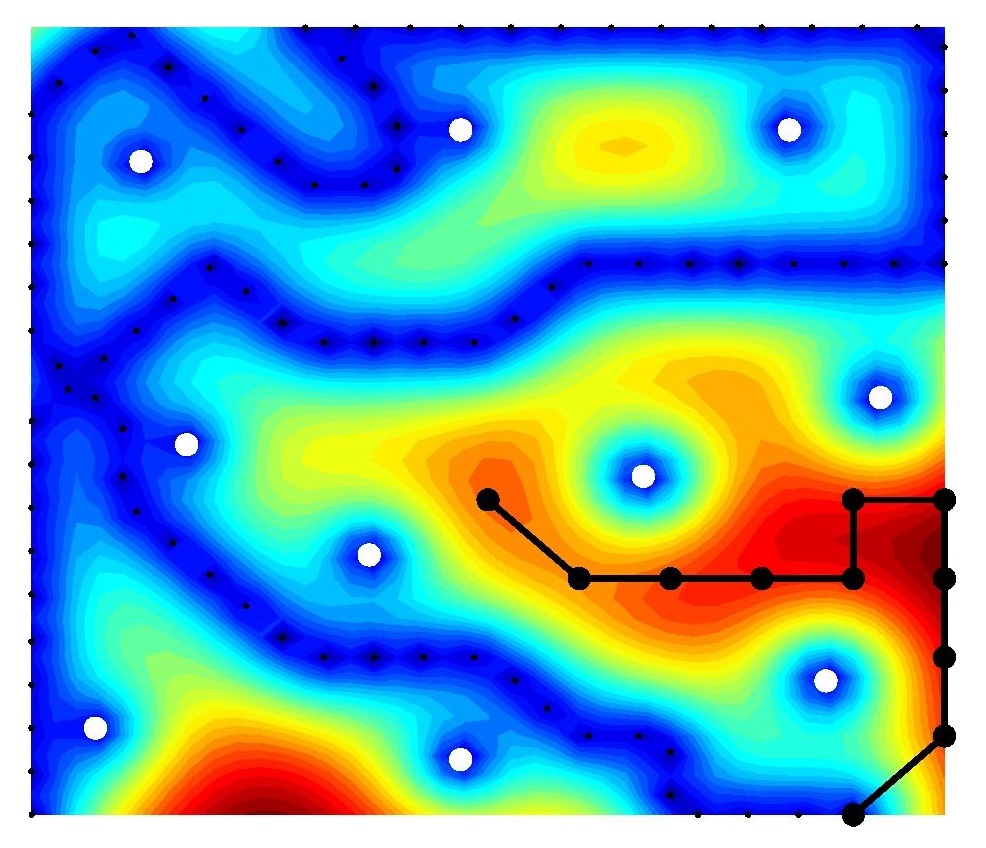 Abstract
The goal of this Master project was to develop central pattern generator (CPG) based controls for a Planetary Exploration Tensegrity Robot. Development occured primarily in a physics-based tensegrity simulator, and involved an exploration of various candidate tensegrity structures and associated controls to roll the robot over various terrains. Tensegrity structures are uniquely appropriate for distributed CPG based control due to their compliant tension network which mirrors the properties of the CPG network. It is believed that tensegrity robot technology can play a critical role in future planetary exploration. Artist view of tensegrity robots on the surface of Titan

Abstract
This work presents the development of a framework for the three-dimensional simulation of slip fronts at the interface between a deformable solid body and a rigid surface.
Experimental observations of this phenomenon have been described by Ben-Dav et al. (2010) and their reproduction in two-dimensional numerical simulations has been reported by Rdiguet et al. (2013) and Kammer et al. (2012).
Preliminary simulations matching the original experimental setup reveal the geometry to be challenging to accurately simulate in the dimensions. Results from subsequent simulations using a modified geometry with properly scaled parameters are presented. While unachieved mesh convergence prevents the observation of slip fronts at the interface, results show the newly developed workflow to be working.

Abstract
This work is about coupling a 3D CFD code (TransAT) and a 1D code (OLGA). The interest in this
work lies in the possibility of simulating real-world problems by saving computational time required
by a fully 3D simulation through the use of a 1D model in the sub-domains where a more detailed
description of the flow is not necessary.
A coupling scheme is proposed that enforces conservation of mass, momentum and energy across
a coupling boundary. Time discretization is based on a semi-implicit scheme. The implementation
of the conservation laws is validated on simple test cases. The fact that different physical models
are used in each code, however, may lead to discrepancies near the coupling boundary interface.
More complex problems are considered and the stability of the algorithm is tested for multi-phase flows, with phases crossing the coupling boundary in opposite directions. These flows are not usually studied in the framework of a coupling scheme due to their complexity. The results are satisfactory even though they are affected by the lack of 3D information in the domain simulated by the 1D code OLGA.
The coupling scheme has been applied to a real problem in the context of oil and gas applications.
We considered a multi-phase flow in a domain characterized by a complex 2D sub-domain, i.e. a
dome structure laying on the seabed and containing a jet spill of oil and gas slugs, connected to a 1D
sub-domain simulating a long riser. The robustness of the implemented coupling algorithm is shown
for this multi-phase problem with different phase flow directions and a phase-change interface model
applied at the coupling boundary.
This work shows mathematically the advantages of semi-implicit coupling schemes. We also highlight
the difficulties coming from having different physical models used by two different solvers and propose some specific solutions to mitigate those issues.
The stability of the method and the documentation provided concerning the validation cases are
sufficient for a release of the current version of its implementation in the TransAT code.

Description
Solving nonlinear optimization problems for real-time applications is a challenging task and has been restricted to applications with rather slow cycle times. The main reason for this restriction can be traced to the computational demand that optimization-based algorithms pose to the computational hardware. Although there exists a variety of both commercial and free solvers for nonlinear optimization problems, their rather generic nature prevents them from exploiting the problem structure inherent in some specific problem classes to solve a problem instance as efficient as possible. Furthermore, the complexity and/or licenses of standard solvers restrict their deployment on non-standard platforms such as embedded control systems. The effectiveness of structure-exploiting algorithms was recently shown for model predictive control problems with the solver FORCES (http://forces.ethz.ch). A tailored high-speed nonlinear optimization solver for network problems will increase the range of possible applications which can be tackled with today’s hardware platforms.

The problem of imaging transparent (phase-only) specimen is commonly encountered in biology. As an alternative to hardware-based solutions, one recovers the phase information by solving the Transport of Intensity Equation (TIE) that relates the phase and the intensity images. The fundamental advantage of the TIE is that it allows one to obtain the phase image by using a standard bright-field microscope.

The goal of the project is to solve the TIE by means of an inverse problem approach. An ImageJ plugin will be implemented to compute TIE solutions and validate the applicability on real datasets.

Description
The recent advances in Sparse coding and Dictionary learning have shown to be very useful for classification problem. A dictionary is learned per class and a test sample is attribute to the dictionary resulting in the best reconstruction after sparse coding. This has an important potential for classification and change detection problems in remote sensing imagery.  This project aim at focusing more particularly to hyperspectral images which are challenging since high-dimensional. Adding the spatial and temporal information in the classification/detection process will be investigated and compared with state-of-the-art classifier.