Gravitational lensing is a direct consequence of Einstein’s General Relativity. It describes the deflection of photons and their time delay as they propagate under the influence of the potential well of a massive object. Due to the light deflection, luminous sources located in the background of such massive objects are seen distorted, as they would be if they were seen behind an optical lens. Astrophysicist therefore speak of the “gravitational lensing” effect. The phenomenon can occur in different regimes: strong, weak and micro.

When the lensing mass/potential is compact enough, gravitational lensing occurs in the strong regime, where multiple lensed images of the source are seen close to the lensing mass in projection on the plane of the sky. This leads to the impressive images shown in Fig. 1. Studying in details the distorted source using lensing models is a powerful tool to map the distribution of visible and dark matter in gravitational lenses. These can be anything like individual galaxies or galaxy groups or clusters. When the lens is much less massive, of the order of a stellar mass, the deflection angles are very small. One speaks of “microlensing”.

When the lens is not very compact, only a single image of the source is seen, but still distorted with respect to its “unlensed” aspect. The effect can be measured statistically using many lensed galaxies and one then speaks of “weak gravitational lensing”. The measurement of weak lensing is extremely important in cosmology, as it is sensitive the cosmological parameters describing dark energy, dark matter as well as the shape and history of the Universe. Weak gravitational lensing is the main cosmological probe (cosmological tool) proposed for implementation in the ESA EUCLID mission. 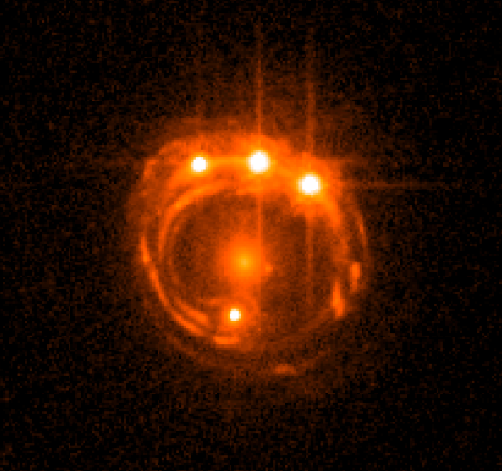 Fig. 1 — Example of a strong gravitational lens. In this image taken with the Hubble Space Telescope, the quasar RXJ1131-123 is seen quadruple due to gravitational lensing. It appears as four point-like images, in white in the picture. A prominent ring connects the four images of the quasar. It is the lensed image of the host galaxy of the quasar and is called an “Einstein ring”. The galaxy responsible for the lensing effect (the lens) is seen in the middle of the ring. Detailed observations and modeling of lensed sources, like this quasar, allow to infer the relative contributions of dark and luminous matters to the total mass of lensing galaxies.