COSMOGRAIL is the COSmological MOnitoring of GRAvItational Lenses. Our project is aimed at measuring time delays for most known lensed quasars, from optical light curves obtained with small but (almost) dedicated telescopes in the northern and southern hemispheres.

COSMOGRAIL involves people from different countries, spanning a broad range of expertise. The goal is to measure individual time delays with an accuracy below 3%, in order to determine the Hubble constant H0. A stand-alone measurement of H0 is highly complementary to other cosmological probes, such as the observations of the CMB made by the ESA Planck mission. This complementarity will help us to understand better the so called “dark energy” which is driving the accelerated expansion of our Universe.

Measuring time delays is difficult, but not as difficult as it first appeared in the late 80s when the first monitoring programs were started. Obtaining regular observing time on telescopes in good sites was (and is still) not easy and the small angular separations between the quasar images require to perform accurate photometry of blended objects, sometimes with several quasar images plus the lensing galaxy within the seeing disk.

The COSMOGRAIL project, started in April 2004 and lead by EPFL, addresses both issues of carrying out photometry of faint blended sources and of obtaining well sampled light curves. In order to use all the available data, even with bad seeing, the data are processed using the MCS deconvolution algorithm.

COSMOGRAIL has expanded over the years and it gave rise to several related projects to measure the Hubble constant, in particular H0LiCOW and STRIDES. It is also related to the EPFL-led ERC COSMICLENS project. All these projects have recently merger into TDCOSMO which gathers all teams working on Time Delay COSmography.

In a few words, the COSMOGRAIL project consists of monitoring strongly lensed quasars and to measure the “time delays” between the luminosity variations of the lensed images. We observe distant quasars, gravitationally lensed by galaxies lying on the line of sight from us to the quasar; as a result of this configuration, we see multiple images (usually 2 or 4) of the same quasar.

However, the light travel times along the photon paths that form these multiple images are different ! By measuring these differences (aka time delays) between the individual images of the same quasar, we can learn about the absolute geometrical configuration of the gravitational lens. With a model of the mass distribution in the lensing galaxy, these time delays give direct access to the value of Hubble’s constant H0 — at relatively low cost, in a way that is fully independent from other techniques, and without a distance ladder or complicated astrophysics.

The COSMOGRAIL project is now running for more than 13 years. It monitors dozens of lensed quasars with small scale telescopes all around the world, including the 1.2m Swiss Leonard Euler telescope located a few hundred meters away from the 2.2m MPG telescope, in La Silla. The most recent, and perhaps most impacting result of this project is a 2.4% determination of the Hubble constant, using the light curves of the lensed QSO HE0435-1223 presented in the figure below. 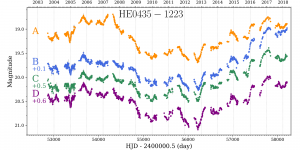 Some light curves and results can be found in our latest publications. 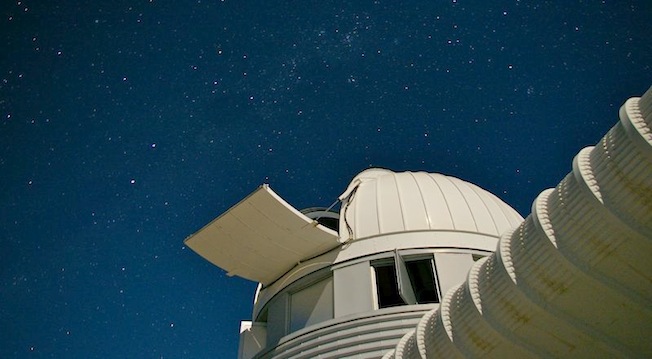