We have developed a highly integrated small soft robotic insect, DEAnsect, only 4 cm long and weighing less than 1 g, zipping along at 3 cm/s.

DEAnsect is propelled by soft artificial muscles: it can be twisted, bent, squeezed, while retaining its functionality. It is fast and robust, can climb slopes, and even keeps on zipping along after being flattened by a fly swatter.

When integrated with ultralight electronics and a miniature battery, DEAnsect can sense light and dark, and thus autonomously follow a line painted on the floor. Using low-voltage DEAs was the key to being able to miniaturize the control electronics.

DEAnsect sets a new milestone for biomimetic soft insect-sized robots, fully autonomous and untethered, and capable of interaction with its environment.

This work is a collaboration between the EPFL-LMTS (Soft Transducers Laboratory), the EPFL-LAI (Integrated Actuators Laboratory) and the LPPI at the Université de Cergy.

This research was published in 12-2019 in Science Robotics

DEAnsect has three legs: front, left and right. Each leg is driven by one artificial muscle (technically a low-voltage dielectric elastomer actuator) that pushes it forward and backward 450 times a second, too fast for the eye to see. 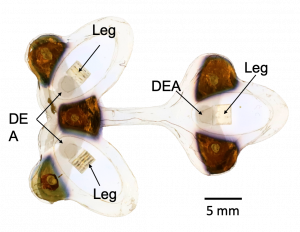 The three legs are tilted 45° backwards. When the artificial muscle  expands, it pushes its leg forward. The leg slides forward. When the DEA contracts, the leg only slides back a small fraction of the forward displacement, due to directional friction. The robot body is therefore pulled forward at each cycle, roughly 20 µm per step. The steps are tiny, but the robots takes 450 steps per second, allowing for fast motion. 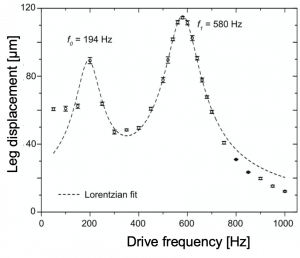 To create this autonomous robot, we developed high power density Dielectric Elastomer Actuators (DEAs, one type of electrostatic artificial muscles). Our DEAs use a drive voltage that is an order of magnitude lower that required for more widely used DEAs.

Our reduced voltage is what made possible the development of 780 mg on-board electronics. Had the voltage been even 50% higher, the mass of the control electronics would have been many grams, and DEAnsect would not have been able to carry it.

The low-voltage DEAs consist of 6 µm thick silicone layers sandwiched by ultra-thin electrodes. , consisting of  nearly single-molecule thick layers of single-walled carbon nanotubes assembled using a Langmuir technique (as we initially described in this article and then further improved recently in our lab).

Electrodes for DEAs need to be extremely thin and soft to limit their stiffening effect on the thin DEA structure, especially when the dielectric layer is very thin to lower the drive voltage. 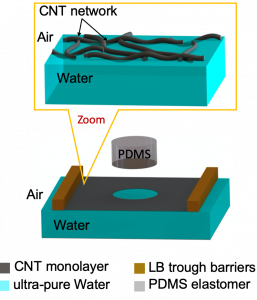 The electrodes must also have good enough conductivity for fast (>500 Hz) operation. However, thin and soft electrodes are generally poor conductors.
We used the Langmuir-Schaefer method to create 2D assemblies of the SWCNTs to achieve stretchable electrodes conductive enough to allow our low-voltage DEAs to operate at 500 Hz and soft enough to deliver the high strain needed for high power density. 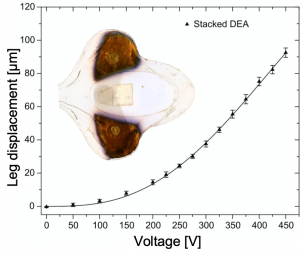 Using the SWCNT electrodes, the total weight of the three active DEAs is about 0.4 mg. Their high power density allows them to drive the 1 g DEAnsect (2000 times heavier).

Why did you develop this soft robotic insect?
Insects have long fascinated humans. They move very fast and thanks to their compliant body they adapt their shape to unpredictable environments, eg squeezing into a tight spot, or twisting to escape a predator. They can also survive major impacts like falling from a great height or hitting a wall at full speed. We wanted to make a soft robot that could be quick and robust like insects and yet carry its own power supply and control electronics.
In contrast to DEAnsect, nearly all soft robots today are tethered to a compressor or power supply, especially at insect scale, where it is particularly challenging for the artificial muscles to deliver high enough power to carry the entire robot. Our goal was to show that artificial muscles, when coupled to the right low-mass electronics, allow for untethered autonomous walking robots.
How is DEAnsect different from previously developed robotic insects?
Most of the robotics insects developed so far have rigid bodies and motors. DEAnsect is the first example of an untethered robotic insect powered by soft artificial muscles.
This allows DEAnsect to physically interact with the environment and with other robots without being damaged. Interaction is an essential component of the collective intelligence observed in swarms of ants or termites.
Can DEAnsect collaborate in swarms? 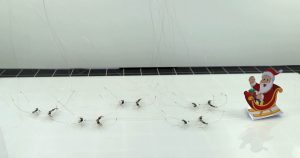 yes they can! (simply for now). see our reinDEAr Santa video! 5 DEANsects working together for the joy of girls and boys.

This work was funded in part by: