Innovations developed by our lab have been analysed by the European Commission’s Innovation Radar (see mission statement). One of the researchers involved, Arman Iranfar, explains this ground-breaking technology. 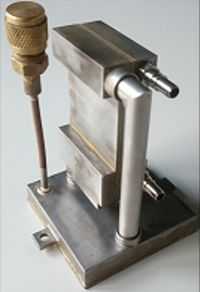 Nowadays, data centers with large rooms are filled with a huge number of servers and other IT equipment that account for around 2% of the global energy consumption. Such a significant energy consumption has resulted in a yearly electricity billing of around $150B since 2016.  A considerable amount of this energy, i.e., as large as 40%, is consumed in cooling and ventilation facilities to maintain proper temperature and humidity conditions of the data centers. Therefore, one of the main reasons behind the energy inefficiency of the so-called “modern” data centers is the conventional methods used for cooling. For example, most of the data centers rely on active cooling, by means of traditional fans, which ultimately adds to the energy consumption, thus, the electricity bill. On the other hand,  passive cooling, by means of heatsinks, are found to be very inefficient for heat removal for today’s powerful computers and servers.

In contrast to air cooling devices such as fans and heatsinks, liquid cooling is known to be more efficient in dealing with today’s hot servers and data centers. But using water or other refrigerants is not as straightforward as it might seem. In fact, it is not possible to immerse a server into the coolant without a major redesign of the server, especially for protecting the CPU, storage, memory, and other optical devices. Also, imagine you want to use a high-quality refrigerant similar to the one in your new-brand refrigerators at home. Wouldn’t it be a bit too costly?

Micro-scale gravity-driven thermosyphons designed and manufactured at ESL, EFPL, can address all these issues. Thermosyphon is a cooling device that can be easily put on top of a CPU to maintain a desired temperature. First off, the designed thermosyphon has the same footprint size as commercial CPUs with a height of only 10cm which makes it easily fit inside modern servers. The thermosyphon has four major components: evaporator, condenser, and two pipes known as riser and downcomer. The evaporator is in the bottom of the thermosyphon and in direct contact with the CPU and contains the refrigerant, initially at liquid phase, in micro-channels. Once the CPU temperature goes beyond a threshold value, the evaporator absorbs the heat. Thus, the refrigerant constitutes  a mixture of liquid and vapor, also known as the two-phase mixture. Then, the vapor goes up through the riser until it reaches the condenser. At the condenser, the vapor loses its heat and turns back to liquid. Then, the liquid comes down back to the evaporator thanks to the gravity through the downcomer pipe. This loop continues and the temperature of the CPU can be maintained at a particular threshold defined by the designer.

One of the main advantages of the thermosyphon is that no additional energy is used for cooling as it can leverage the gravity. Therefore, the energy consumption and electricity bill of data centers can drop dramatically.