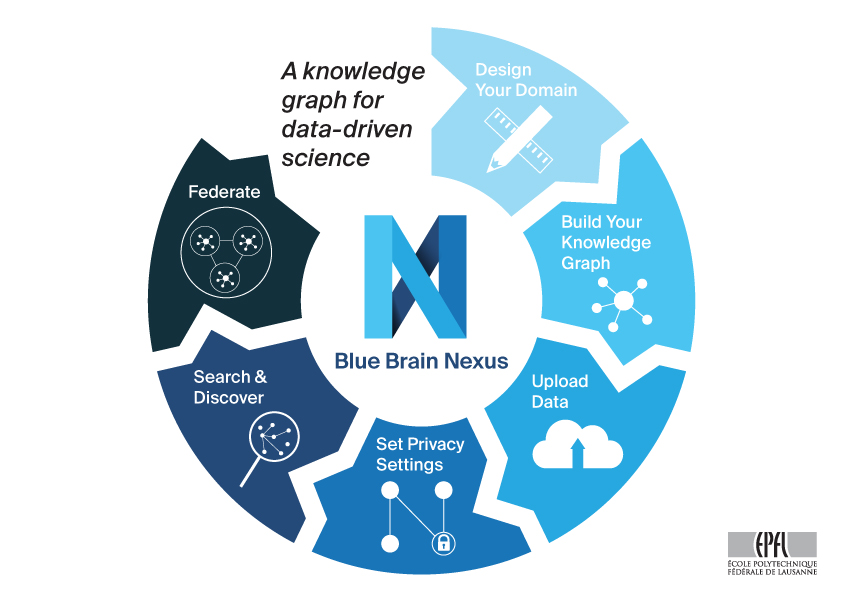 EPFL’s Blue Brain Project today announces the release of its open source software project ‘Blue Brain Nexus’, designed to enable the FAIR (Findable, Accessible, Interoperable, and Reusable) data management principles for the Neuroscience and broader scientific community. It is part of EPFL’s open-science initiative, which seeks to maximize the reach and impact of research conducted at the school.

The aim of the Blue Brain Project is to build accurate, biologically detailed, digital reconstructions and simulations of the rodent brain and, ultimately the human brain. Blue Brain Nexus is instrumental in supporting all stages of Blue Brain’s data-driven modelling cycle including, but not limited to experimental data, single cell models, circuits, simulations and validations. The brain is a complex multi-level system and is one of the biggest ‘Big Data’ problems we have today. Therefore, Blue Brain Nexus has been built to organize, store and process exceptionally large volumes of data and support usage by a broad number of users.

At the heart of Blue Brain Nexus is the Knowledge Graph, which acts as a data repository and metadata catalogue. It also remains agnostic of the domain to be represented by allowing users to design arbitrary domains, which enables other scientific initiatives (e.g. astronomy, medical research and agriculture) to reuse Blue Brain Nexus as the core of their data platforms. Blue Brain Nexus services are already being evaluated for integration into the Human Brain Project’s Neuroinformatics Platform.

Specific to enabling scientific progress, Blue Brain Nexus’s Knowledge Graph treats provenance as a first-class citizen, thus facilitating the tracking of the origin of data as well as how it is being used. This allow users to assess the quality of data, and consequently to enable them to build trust. Another key feature of Blue Brain Nexus is its semantic search capability, whereby search is integrated over data and its provenance to enable scientists to easily discover and access new relevant data.

EPFL Professor Sean Hill commented: “We see that nearly all sciences are becoming data-driven. Blue Brain Nexus represents the culmination of many years of research into building a state-of-the-art semantic data management platform. We can’t wait to see what the community will do with Blue Brain Nexus.”

Blue Brain Nexus is available under the Apache 2 license, at github.com/BlueBrain/nexus