With its 100 billion neurons (brain cells) and its 100 trillion synapses, the human brain is a complex multi-level system. The connections among the neurons form a hierarchy of circuits, from local microcircuitry up to the level of the whole brain. Meanwhile at a lower level, every neuron and every synapse is a complex molecular machine in its own right. It is the interactions between these levels, which give rise to human behaviour, human emotion and human cognition. 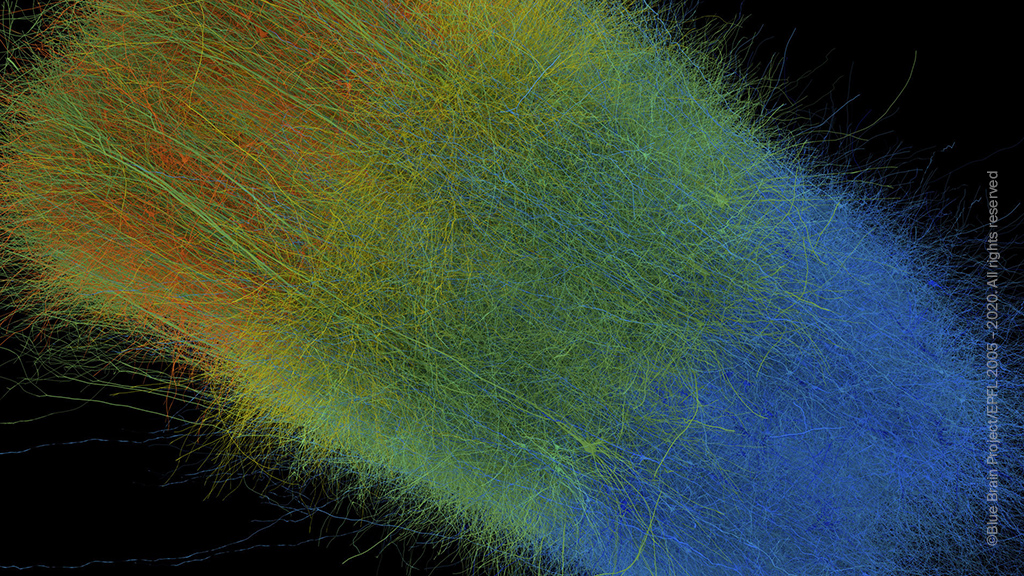 The goal of the EPFL Blue Brain Project is to build biologically detailed digital reconstructions and simulations of the mouse brain.

In pursuit of our goal, we have a data-driven modeling process with five main stages and many elements feeding in. These inter-disciplinary stages begin with the gathering and organizing of data through to the refinement of the models and experiments.  Blue Brain’s team science approach with scientists working alongside engineers, mathematicians and HPC experts supported by BBP’s architecture of software, tools and visualization abilities pertains to a vast range of in silico (simulation) predictions made with unique in silico experiments which would be infeasible or impossible in vitro or in vivo.  Read more about our research process.

In 2015, Blue Brain reached a major milestone with the publication of a first draft of the digital reconstruction of neocortical microcircuitry (Markram et al, 2015). The study confirmed the feasibility of building and simulating a digital copy of a part of the brain and demonstrated that multidisciplinary Big Science in the field of neuroscience yields favorable results (82 scientists contributed to the study).

The paper, which appeared in the journal Cell, represents the most complete description of any neural microcircuit to date. It provides a complete digital map of all the cells and synapses in a block of neural tissue and describes simulation experiments replicating a range of previous in vivo experiments. In other words, Blue Brain’s digital copy of a part of the brain behaves like a real part of the brain.

Most significantly, this study advances the case for simulation as a useful new method in neuroscience. It proves that we understand the basic properties of the components and interconnections of the brain well enough to be able to reconstruct and simulate certain physiological functions.

Data and neuron models used in our current reconstructions are available on the Blue Brain Portal – a knowledge space for simulation neuroscience.