Concept
The principal role of the LESO within this recently completed project , was to develop a new model for predicting the risk of summertime overheating in indoor spaces, defined in terms of the probability that occupants would be thermally dissatisfied with the summertime thermal history of an occupied space. The purpose of this work was to enable building designers to determine the acceptability of design proposals with a view to avoiding the use of applied energy for space conditioning, by using the model to post-process results from building simulation programs.

Result
During the summer of 2006 a field survey was conducted in eight non air-conditioned office buildings, each located within a 50km radius of Lausanne . Their selection was based on a desire for reasonable diversity in terms of their design concept and the adaptive opportunities available to occupants. For each building, volunteers were asked to complete a short electronic questionnaire which was installed on their PC. This questionnaire (below), which appeared at regular participant-defined intervals, asked for evaluations of:

The purpose of this dialogue box was to produce time-series data regarding participants’ adaptive actions and their evolving perception of the parameter(s) under examination. 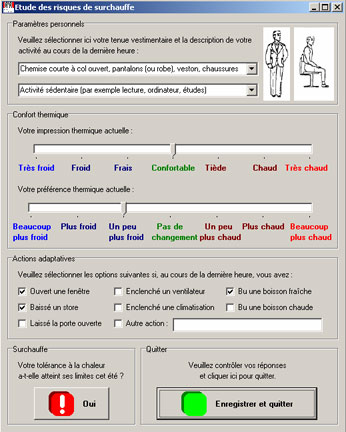 The data from these questionnaires was analysed and a preliminary form of a new adaptive model for overheating risk assessment was developed (see below). This model:

1. Predicts the probability with which occupants will adapt their personal or local characteristics to improve their thermal satisfaction. Examples include: opening windows and doors, use of blinds, switching on fans, adjusting clothing levels etc.
2. The corresponding temperature results from thermal simulation program are then adjusted according to the effect of a given adaptive action on occupants’ neutral temperature (empirical adaptive increments).
3. Finally the new adjusted temperature is input to a model which predicts the probability with which an occupant (or indeed the proportion of a population) will perceive their indoor environment to have overheated. 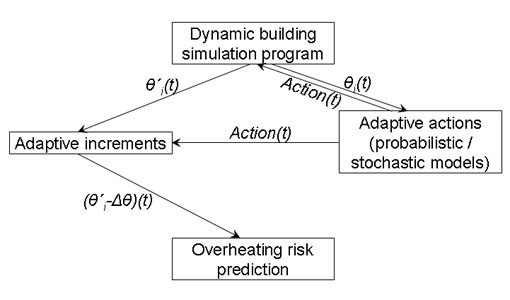 This model for predicting overheating risk is based on analogy with an electrical capacitor. When we encounter overheating stimuli our thermal tolerance T to them is discharged (or overheating probability P increases: P=1-T). During cool periods our tolerance is then re-charged (for example during winter in readiness for discharging the following summer). 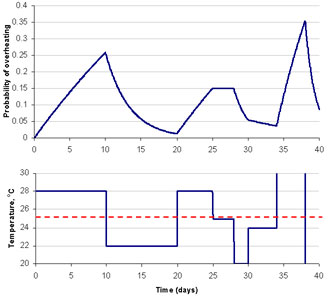