In 1992 the LESO-PB started studying how the nonimaging optics theory could be applied to the design of new daylighting systems. The first trials were performed by computer simulation using the RADIANCE software. The systems were primarily designed as lightshelves made of curved reflectors.

As an example, this is a vertical section of a system called “anidolic zenithal collector”. A concentrator emerging from the facade is designed to accept all incoming light from half the sky hemisphere. In the room, the system comprises two reflectors that will “deconcentrate” the light flux and, therefore, shape it as a beam of well-defined angular spread. Rays traced through the system (red lines) illustrate these two properties.

The above picture illustrates the results obtained by RADIANCE simulations. At the left, a simple office (7 [m] deep, 3 [m] high) is daylighted by two standard facade windows. At the right, the same office is daylighted by an anidolic zenithal collector mounted in the upper opening. The superimposed white curves show the 1.5 % daylight factor contours. 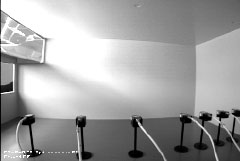 Using a (1:10) scale model positioned under our artificial sky, the computer-generated results were well confirmed. The picture above gives an inside view of the scale model. Small photometers used to measure daylight factors can be seen.