Several full scale prototypes of Anidolic Daylighting Systems (ADS) were built by the Solar Energy and Building Physics Laboratory of EPFL, in order to validate the principles of this novel daylighting approach with regard to visual comfort and energy savings. These prototypes were integrated in different construction types (test modules, experimental buildings, etc.); numerical simulations for integration of ADS within architectural projects were moreover used to complement the scientific knowledge gained on an experimental basis.

A 1:1 scale Anidolic Zenithal Collector (AZC) was installed in 1995 on the DIANE daylighting test modules (see Figure). This facility consists of three mock-up office rooms with the same geometrical dimensions (5.4 x 3.4 x 2.7 meters), which have been placed side by side on the EPFL campus.

The three modules are oriented due North and have an identical external façade, made of double insulated glazing, except the one equipped with an AZC (1.1 meter protrusion over the façade). 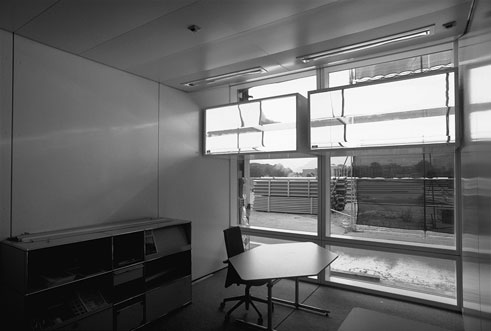 The DIANE daylighting test module equipped with an Anidolic Zenithal Collector (inside view).

Monitoring of the daylight factors within the three mock-up office rooms confirmed the remarquable performance of the AZC prototype :

The DIANE mock-up office room was occupied for several years by scientific collaborators; its luminous atmosphere and visual amenity were greatly appreciated.

The Anidolic Ceiling (AC) was built in 1996 and installed on a mobile daylighting test module (DEMONA modules), located on the EPFL campus (see Figure …).

It uses a light duct into a ceiling to guide a large flux of daylight into a 6.55 meters deep office space (3.05 x 6.55 x 3.05 meters). Its design had to meet the following requirements .

All the internal surfaces of the AC were covered with highly reflective optical material (post-anodized alumium foils of 0.93 regular reflectance). The device is covered with an insulated double glazings at the entry aperture; a single pane, made of organic material, was placed at the exit aperture.

The entrance pane has a tilt angle of 25°, which contributes to to its clearing trough rainfall and constitutes a more favorable incidence angle for light rays coming from zehnital directions (brighter part of the sky). All the external parts of the system are thermally insulated to avoid heat losses and water condensation (thermal bridges).

The AC was installed on 1 : 1 scale mobile test module, placed beside a reference one equipped with a conventional double glazings façade and characterised by identical photometrical (0.8 walls and ceiling reflectance) and geometrical features (3.05 x 6.55 x 3.05 meters). 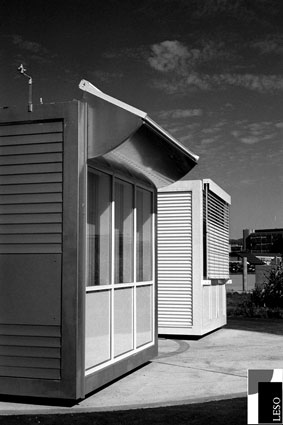 Front view of the Anidolic Ceiling, installed on a mobile test module, beside the reference one (conventional double glazings façade)

The monitoring of both modules confirmed the higher performances achieved by he Anidolic Ceiling for different orientations (mainly North and South), in comparison to the reference :

the average daylight factor of the deeper half room is multiplied by a (1.7) factor in absence of any external obstructions;

Assessment of the visual comfort conditions achieved within the test module by the way of the AC confirmed the pertinence of the approach.

The Integrated Anidolic system (ADS) is intended to fit the requirements of building refurbishment and therefore takes specific architectural design imperatives into account and reduces the complexity of the setting-up process.

It was installed in 1999 on one of the DEMONA mobile test modules, located on the EPFL campus (see Figure).

Through the collaboration with a façade making firm, the following physical imperatives were considered :

The monitoring of the test and reference modules was carried out during the 1999/2000 winter season (october through april). In comparisont to the conventional façade, the anidolic device is caracterised by the following daylighting performances :

The assessement of the visual comfort conditions confirmed that higher luminance values are achieved by the IAS on the ceiling and on the rear office wall.