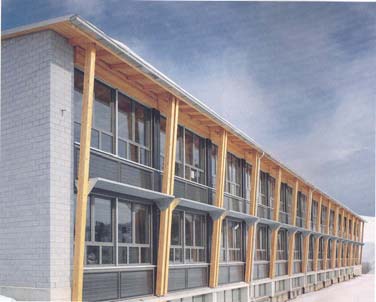 Case n°6
The best rating was given to the balcony integration presented in Case 6.
The solar modules occupy the whole parapet area, and are used as parapet external finishing. The size and shape of the module fit the grid and match the rhythm of the façade.
The collector glazing and the black colour of the absorber match the colour and material of the above window openings and are dimensioned to completely cover their area.
The collectors appear as a part of the building in all respects.

Case n°7
This Canadian school also integrates Solarwall collectors into façade.The integration is considered acceptable even though it is definitely not considered as good as Example  8. The solar collectors are used as façade cladding but the covering rules in relation to the building structure are not as clear as in the Canadair hangar. The square building symmetry is respected and equal facades are treated equally, but the wall surface of each façade is only covered in the upper part, making the cladding more a decorative element than the upper layer of the wall system. The blue colour of the collector does not help the global appreciation and it is considered to be a bad to just acceptable choice, while the size and shape of the modules are considered, as is the global appreciation, widely acceptable. 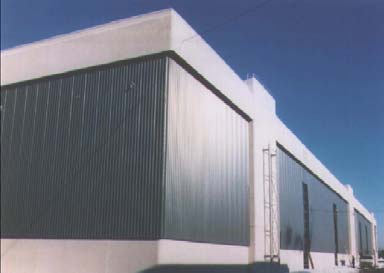 Case n°8
This Solarwall integration into Canadair Hangar in Canada is considered to be the second best integration.
The unglazed solar system works both as solar collector and façade cladding. It is placed in the non-carrying wall, underlining the structure of the building. The use of the solar system as solar collector + façade cladding + composition element expressing the structure, makes the integration fully successful, although the architecture of the building is not that interesting, and the colour of the absorber is black.