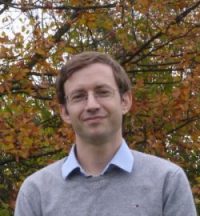 Jérôme Waser was born in Sierre, Valais, Switzerland in October 1977. From 1997 to 2001, he studied chemistry at the ETH Zurich. After a summer internship at Lonza AG in Visp in 2000, he chose organic chemistry as specialization and obtained his Diploma under the supervision of Prof. Erick M. Carreira and Dr. Christian Fischer in 2001.

In 2002, he started his Ph.D. studies at the ETH Zurich also under the supervision of Prof. Erick M. Carreira. During his Ph.D., he worked on the development of new metal-catalyzed amination reactions, which culminated in a new access to azides and hydrazines directly from olefins.

After obtaining his PhD in 2006, he then joined the group of Prof. Barry M. Trost at Stanford University as a postdoctoral fellow. While at Stanford, he worked on the total synthesis of Pseudolaric Acid B, a diterpene natural product displaying interesting antifungal, antifertility and antitumor activity.

His principal focus of research is the discovery of new reactivity in organic chemistry and beyond to enable non-classical bond disconnections (see research)).