Benziodoxoles: A toolbox of reagents for organic synthesis

Up to ten years ago, cyclic hypervalent iodine reagents, such as benziodoxoles, had been only scarcely employed for the introduction of new functional groups in organic chemistry. In fact, the most frequently used cyclic hypervalent iodine reagents were iodine (V) compounds, such as IBX and Dess-Martin periodinane in oxidation reactions. With our work on alkyne transfer and the work of Togni and co-workers on trifluoromethylation, the exceptional properties of benziodoxoles reagents for atom-transfer reactions have become for the first time truly apparent (Chem. Commun. 2011, 47, 102. DOI:10.1039/C0CC02265) . It is our conviction that these properties will also be useful for the transfer of other functional groups. In view of a first step in this direction, we were particularly interested in the  azido-  and cyano- benziodoxole reagents, two further “treasures” first synthesized in the Zhdankin group. Indeed, cyanides and azides are among the most versatile functional groups in organic chemistry. Most methods used to introduced them in organic molecules are based on the nucleophilicity of the azide and cyanide ions, and more general and versatile electrophilic synthons are urgently needed. In 2017, our group further introduced Indole-BX and Pyrrole-BX as new reagents for the Umpolung of indoles and pyrroles. Of course, the research for new, yet undisclosed reagents continues to be an important topic of research in our group, and both modifications of the benziodoxole core structure and the transfered functionality offer exciting opportunities for further development.

With azidobenziodoxole reagents, we discovered a fast and clean azidation of cyclic ketoesters without the addition of any additive (Org. Lett. 2013, 15, 3246. DOI:10.1021/ol401229v) . We preferred the use of the dimethyl reagent, as it was both more efficient and safer to use (smooth decomposition vs explosion for the carboxy reagent). Nevertheless, the azidation did not work in the case of non-cyclic ketoesters or ketones as substrates. In this case, we found that it was possible to further activate the reagent using zinc triflate as catalyst. Under these conditions, both non-cyclic ketoesters and silyl enol ethers could be azidated successfully.

As Azidobenziodoxolone (ABX, Zhdankin reagent) is a stronger oxidant, it was an ideal reagent for the generation of azide radicals in presence of a copper photocatalyst and blue LED. The formed azide radical can then react with an olefin, generating a benzylic radical, followed by oxidation to the carbocation and attack of the carboxylic acid to give 1,2-azidolactones. Unfortunately, ABX is unstable and can explode spontaneously (see Stability Data). In contrast, Azidodimethylbenziodoxole (ADBX) could be activated by a Lewis acid to give the corresponding iodonium. Reaction wiht the olefin, followed by lactonization, 1,2-aryl shift and azidation gave then the observed 1,1-azidolactones.

When working with a highly pure sample of Zhdankin reagent, an explosion occurred, leading to injury to the researcher. We therefore collaborated with the safety department at EPFL and TUV Sud AG in Basel to have a better idea of the safety profile of this reagent. The results were frightening, indicating very high shock and friction sensitivity. Fortunately, other derivatives were safer to use and displayed similar reactivity. The benziodazolone derivative (ABZ) was especially efficient for the generation of azido radicals under photoredox conditions (J. Org. Chem. 2018, 83, 12334-12356. DOI:10.1021/acs.joc.8b02068 ).

In 2021, we combined two fields of research in our group: azidation with hypervalent iodine reagents and small ring chemistry to develop a new synthesis of quinolines starting from cyclopropenes. In this work, direct activation of ABZ with light in presence of acetoxybenziodoxolone was sufficient to generate the required azido radical (Org. Lett. 2021, 23, 5435-5439. 10.1021/acs.orglett.1c01775).

With cyanobenziodoxoles, we were able to develop a new method for the synthesis of thiocyanates starting from thiols (Chem. Eur. J. 2015, 21, 2662. DOI:10.1002/chem.201406171 ). As was the case for the related alkynylation reaction, this transformation is extremely efficient, with often quantitative yields obtained in a few minutes. Both the dimethyl and the carboxy reagents worked well. Many functional groups such as acids, alcohols or aromatic amines are tolerated. The cyanation of thiols displayed a broad generality, as it could be applied in the case of aromatic, heteroaromatic, aliphatic or glycosidic thiols.

After having developed the efficient alkynylation of carboxylic acids using EBX reagents under photoredox conditions, we wondered if a similar approach could be also successful for other benziodoxolones. In particular, the conversion of carboxylic acid is usually a multi-step procedure generating large amounts of waste. In 2016, we developed a one-step decarboxylative cyanation of carboxylic acid using CBX and an iridium photocatalyst. The reaction worked well for amino- and oxy- acids, but not for simple aliphatic acids. Mechanism investigations combining experiments and computational chemistry shown that the alkynylation and cyanation reaction, although similar on the first look, follow different mechanisms: The alkynylation proceeds via a radical, whereas the cyanation most probably involves an iminium intermediate (Chem. Sci. 2017, 8, 1790-1800. DOI:10.1039/C6SC04907A ).

The efficient azidation and cyanation of ketoesters derived from indanones with benziodoxol(on)e reagents gave access to the starting materials needed for an enantioselective decarboxylative allylation reaction. The corresponding homoallylic azides and nitriles could be obtained in high yield and enantioselectivity using a palladium catalyst and Trost’s chiral diphosphine ligands (Org. Lett. 2015, 17, 5832. DOI:10.1021/acs.orglett.5b03002 ).

Umpolung of indoles and pyrroles

The approach was not limited to the C-H functionalization of (hetero)aromatic C-H bonds. In 2018, we showed that the directed functionalization of the C-H bond on the carbonyl group of benzaldehyde derivatives was also possible, using either an iridium or a rhodium catalyst for oxygen and nitrogen directing groups respectively. (Org. Lett. 2018, 20, 1473-1476. DOI:10.1021/acs.orglett.8b00337)

In 2018, a different mode of activation was discovered using silicon-based Lewis acids. These conditions allowed the coupling of the Indole- and Pyrrole-BX reagents with electron-rich (hetero)arenes with high regioselectivity. The method was particularly useful to access non-symmetrical bi-indole derivatives, which cannot be synthesized using existing oxidative coupling methods. During this work, a new procedure to access C2-substituted Indole-BX reagents was also developed. Chem. Eur. J. 2018, 24, 10049-10053. (DOI:10.1002/chem.201802142)

In comparison to EBX reagents, vinylbenziodoxolone (VBX) reagents have been less investigated. This was partly due to a lack of efficient synthesis, with the exception of the protocol reported by Olofsson and co-workers. In 2019, we reported a new approach for the synthesis of heteroatom-substituted VBX reagents by the base-catalyzed addition of phenols or sulfonyl amines onto EBX reagents. The catalyst loading was essential for an efficient synthesis and preventing follow-up reactions, as calculations showed that protonation of the obtained primary adduct was reversible and the intermediate could decompose or form the alkyne products. The reaction occurred under mild conditions, allowing the functionalization of drugs and amino acid derivatives. The high reactivity of the hypervalent iodine bond could be exploited in a stereoselective synthesis of enamides via palladium-catalyzed cross coupling reactions (Chem. Sci. 2019, 10, 3223-3230. DOI:10.1039/C8SC05573D ).

The obtained O-VBX reagents displayed very unusual reactivity under basic conditions in presence of nucleophiles: Substitution of the iodine was observed with simultaneous shift of the double bond. Such a reactivity is usually observed for oxy-allyl cation intermediates. Enol ethers were obtained with complete stereoselectivity, and their oxidation led to polyoxygenated compounds in few steps only starting from alkynes. (Angew. Chem., Int. Ed. 2020, 59, 18256-18260. DOI:10.1002/anie.202006707 ).

At this point, we were also interested to investigate the reactivity of VBX reagents in other transformations developed for the corresponding EBXs. In 2020, we demonstrated that VBX reagents also worked very well in the copper-catalyzed reaction with diazo compounds, resulting in an efficient oxyvinylation process. In this work, we also developed a new protocol for the efficient synthesis of alkyl-substituted VBX reagents. (Org. Lett. 2020, 22, 3884-3889. DOI:10.1021/acs.orglett.0c01150). 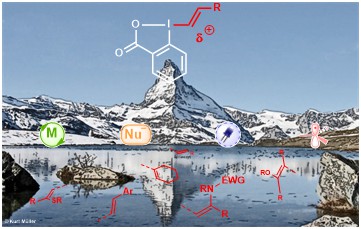 The fast expanding use of benziodoxole reagents

Togni’s work on trifluoromethylation and our work on alkynylation had amply demonstrated the utility of benziodoxole reagents. Most certainly, these reagents will be also highly useful for the transfer of other functional groups. Indeed, exciting new examples have started to emerge in azidation, cyanation, fluorination and many other transformations (Angew. Chem., Int. Ed. 2016, 55, 4436. DOI: 10.1002/anie.201509073 ). 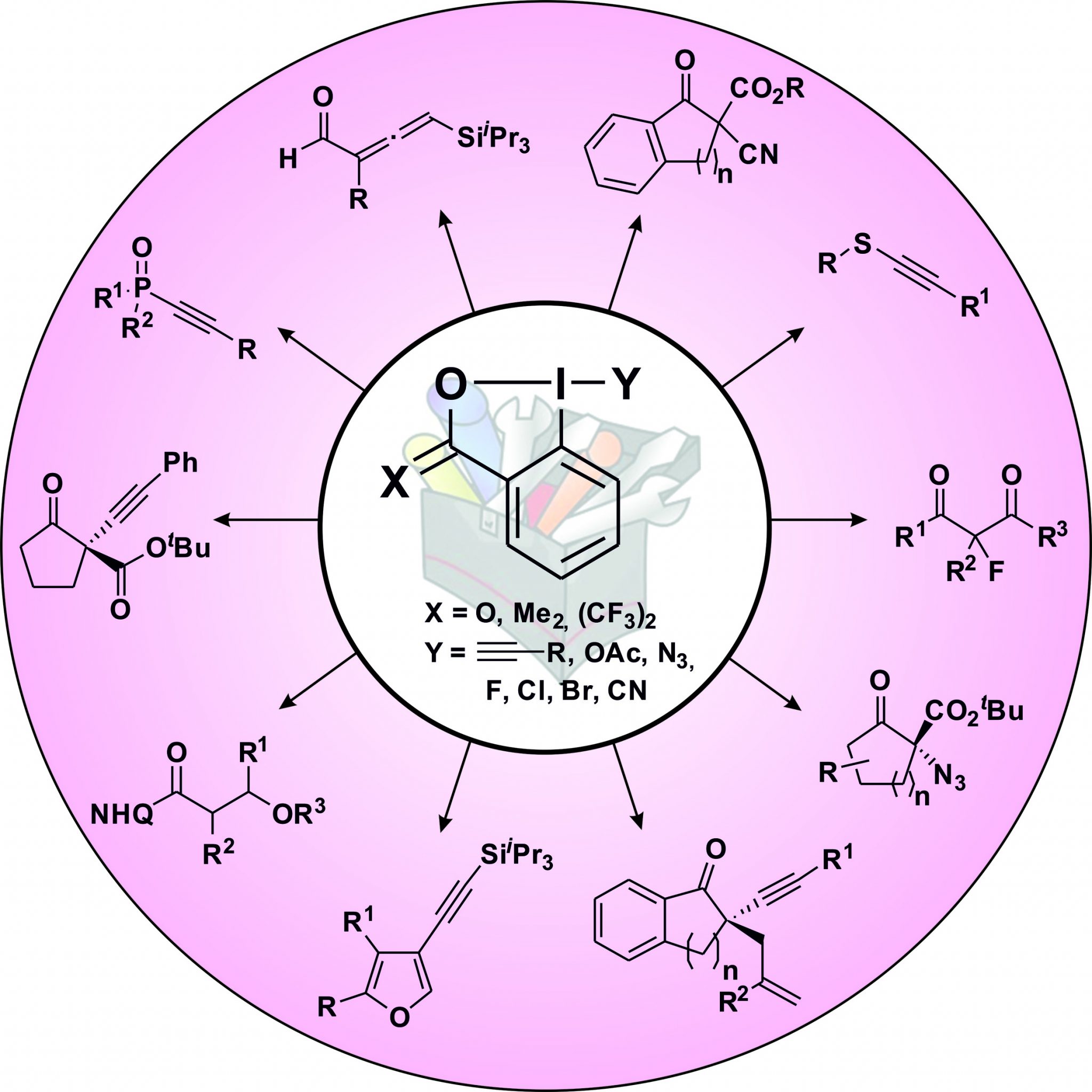