The intermolecular functionalization of olefins presents important challenges of reactivity, regio- and stereoselectivity. A classical solution to these issues is the installation of a tether making use of a functional group on the molecule. The now intramolecular reaction is faster and a cyclic transition state facilitates control over regio- and stereo- selectivity. Nevertheless, this comes at the cost of lower synthetic efficiency, as multiple steps are needed to install and remove the tether. Recently, researchers have begun to address this challenge by developing in situ tethering methods, making this strategy much more attractive (Chem. Sci. 2017, 8, 32. DOI: 10.1039/C6SC04366F ).

Since 2014, we had been attempting to develop an intermolecular version of the palladium-catalyzed oxy- and amino- alkynylation of olefins, but without success. In 2015, we turned to a new in situ-tethering approach based on the formation of half aminals. An efficient one-step procedure for the palladium-catalyzed oxy-alkynylation and arylation of allyl amines could be developed (Angew. Chem., Int. Ed. 2015, 54, 5250. DOI: 10.1002/anie.201500636 ). Key for success was the use of a hemiaminal tether derived from trifluoroacetaldehyde. The enhanced acidity of the half aminal allowed the use of a mild carbonate base.

In 2016, we were able to extend this strategy to the synthesis of diamines via the in situ formation of aminals (Angew. Chem., Int. Ed. 2016, 55, 12881. DOI: 10.1002/anie.201607318 ). The reaction worked well for the introduction of different alkynes groups, as well as electron deficient (hetero)aryls. As the aminal tether and the amine protecting group can  be easily removed under acidic conditions, the transformation constitutes a very efficient access to diamines.

In 2017, the strategy could be extended to allylic alcohols, resulting in aminoalcohols with different substitution patterns (Org. Lett. 2017, 19, 3548. DOI: 10.1021/acs.orglett.7b01524 ). In case of the aminoarylation reaction, it was necessary to develop a new Fu-XPhos ligand to suppress a competing Heck pathway.

We then investigated if the tethering approach could be extended to alkynes. We were pleased to see that the carbooxygenation reaction was successful under similar conditions. The use of alkynes had several advantages: the reaction was also successful for substituents at the terminal position, and a broader range of aryl groups was tolerated as cross-coupling partners. Interestingly, the reaction proceeded with cis selectivity for terminal alkynes, but trans selectivity for internal ones. The products could be easily transformed into furan derivatives, or reduced with high diastereoselectivity (Chem. Eur. J. 2019, 25, 3010-3013. (DOI:10.1002/chem.201900020 ). It was also possible to access oxazolidinone products by using carbonate salts as carbon dioxide surrogates. ( Eur. J. Org. Chem. 2019, 2019, 5183-5186. DOI:10.1002/ejoc.201900500 )

We found the perfect diastereoselectivity observed for the hydrogenation of the alkyne carbooxygenation products fascinating: Indeed, if the N,O-acetal could be installed enantioselectively, a highly stereoselective synthesis of difficult to access amino alcohols would result. Conceptually, this would constitute the “catalytic formation of a chiral auxiliary”, an approach mostly unexplored in synthetic chemistry. It would have the potential to combine the robustness and high selectivity obtained with chiral auxiliaries with the higher atom- and “chiral element” economy of enantioselective catalysis. As we knew that formation of the initial half aminal was reversible, a dynamic kinetic asymmetric transformation with a chiral palladium catalyst appeared possible. Realisation of this idea took two years, as identifying the best ligand was especially challenging. In 2020, we finally succeed, based on the use of a truncated “one-arm” Trost-type ligand. High enantioselectivity was observed in the carboxygenation step, and again perfect diastereoselectivity in hydrogenation. Deprotection was easy to give the free amino alcohols (J. Am. Chem. Soc. 2020, 142, 17334-17339. DOI:10.1021/jacs.0c09177 ). 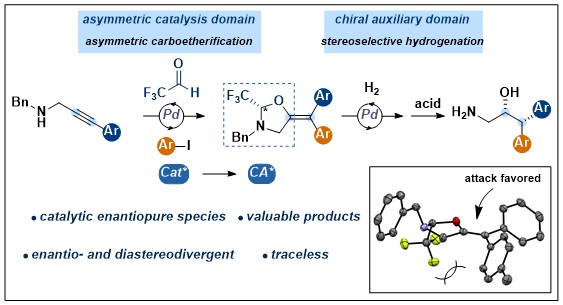