The high reactivity of EBX reagents with thiols make them well-suited for the functionalization of cysteine-containing biomolecules. In collaboration with the Adibekian group at the University of Geneva, an azide substituted EBX reagent could be used for the functionalization of proteins, even in living cells. The method was used for the proteome-wide profiling of targets of cysteine-reactive small molecules, which allowed the identification of one of the targets of curcumin, a natural product with high potential as anti-cancer agent (Angew. Chem., Int. Ed. 2015, 54, 10852. DOI: 10.1002/anie.201505641).

Potential applications of the thiol alkynylation reaction are not limited to proteins. Indeed, the Matile group at the University of Geneva, also used the same reagent for the termination of cell-penetrating poly(disulfide)s (Polym. Chem. 2016, 7, 3465. DOI: 10.1039/C6PY00562D ). In 2021, the Matile group also demonstrated that EBX reagents can be excellent inhibitors of thiol-mediated uptake across the cell membrane (Helv. Chim. Acta 2021, 104, e2100085. 10.1002/hlca.202100085).
In our group, we wondered in particular if a general modification of biomolecules not limited to proteins with hyperreactive cysteines could be developed. In 2019, we finally succeeded in a general modification of cysteine and peptide in standard buffer solutions. However, the product obtained was not the alkynes, but the simple addition product of the thiol on EBX, probably due to the highly protic nature of the reaction media. The obtained conjugates were surprisingly stable to acids, bases and heating, and the reaction was successful from amino acids to histone proteins. Protein modification was done in collaboration with the Fierz group at EPFL. Particularly interesting was the use of azidated EBX reagents, which resulted in bioconjugate that are “doubly bioorthogonal”. A dye could be installed on the azide group, and a new palladium-catalyzed cross-coupling was developed to modify the hypervalent iodine bond. For example, both a dye and a triplet quencher were instal on the bioactive peptide substance P, allowing to measure single-molecule fluorescence of the peptide bound to cell receptors with enhanced life times (Chem 2019, 5, 2243-2263. DOI:10.1016/j.chempr.2019.06.022 ).

The development with alkyl substituted EBX reagents was highly interesting, but it was still difficult in several cases to control the alkyne to addition product ratio. Furthermore, the internal alkyne formed in these transformations was not well-suited for further transformations. In 2020, we then use TMS-EBX reagents for the direct introduction of terminal alkynes. In water buffer, the TMS group is first removed, and the obtained hypervalent iodine intermediate then converted to the terminal alkyne. The method was used in collaboration with the Wagner/Chaubet group for the functionalization of antibodies, and with the Adibekian group for proteomics. The use of this approach allowed to identify more proteins in the proteomic experiment compared to our first method (Angew. Chem., Int. Ed. 2020, 59, 10961-10970. (DOI:10.1002/anie.202002626 ).

A limitation of EBX reagents for biomolecule functionalization was their low solubility in water. If the reagent is relatively small or polar, the solubility is sufficient to observe reactivity even in pure water buffer. However, the transfer of large lipophilic groups was not possible. This was an important limitation, as the lipophilization of peptides and proteins is an important process. The development of water-soluble EBX reagents has therefore been a long standing project at LCSO. In 2021, after four years of efforts, we succeeded in the synthesis and use of sulfate-substituted amphiphilic EBX reagents, which could be used in pure buffer for the functionalization of cysteine in peptides and proteins. Interestingly, in this case the alkyne was the major product. Under acidic conditions, the thioalkynes could be converted into thioesters, which can be cleaved under basic conditions (Angew. Chem., Int. Ed. 2021, 60, 17963-17968. (10.1002/anie.202106458). 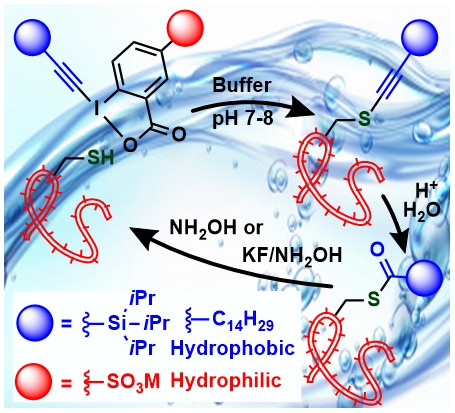 Peptide stapling is an important strategy for stabilizing peptides, especially alpha-helices, and improve their affinity to the targets. When considering the exceptional reactivity of EBX reagents with thiols, we speculated that they would be ideally suited for peptide stapling using cysteine functionalization in unprotected peptides. We therefore developed two new types of reagents: Bis-EBX compounds for cysteine-cysteine stapling, and EBX-activated ester reagents for cysteine-lysine stapling. Both reagents could be used for i+4 and i+7 peptide stapling, with the cysteine-lysine stapling reagents being especially general and efficient. The thioalkyne incorporated in the tether could be directly used in a ruthenium-catalyzed cycloaddition with azides. In collaboration with the Heinis group we demonstrated that one of the obtained stapled peptide indeed showed increase affinity for the protein MDM2 (Angew. Chem., Int. Ed. 2021, 60, 9022-9031. (DOI:10.1002/anie.202014511 ).

As a second approach towards biomolecule functionalization, we wondered if our decarboxylative alkynylation method based on photoredox catalysis could be extended to peptides. This was challenging as the conditions we originally developed did not work on peptides. Fortunately, using CzIPN as catalyst and aryl-EBX reagents, we were able to develop a highly efficient decarboxylative alkynylation of peptides. Investigation on tetrapeptides demonstrated that the reaction tolerated most amino acids, with the exception of tryptophan. In case of cysteine, double alkynylation was observed. The reaction was selective for the C-terminus, and no alkynylation of carboxylic acid side-chains was observed. This was an important step towards the dream of a decarboxylative alkynylation of the C-terminus of proteins, but major hurdles still need to be overcome, as the efficiency of the reaction diminishes drastically with increased length of the peptide or amount of water. ( Angew. Chem. Int. Ed. 2019, 58, 8182-8186. DOI:10.1002/anie.201901922 )

When using simple benziodoxole acetate as oxidant, we found out that it was possible to perform a two-electron oxidation under photoredox conditions to give highly reactive iminium intermediates. A well-established ruthenium photocatalyst gave the best result in this case. Alcohols reacted fast with the iminium intermediate to give isolable N,O-acetals. Alternatively, Friedl-Crafts reactions with both phenols and indoles were possible to give new non-natural peptides. When peptidic nucleophiles were used in the reaction, new types of peptides with non natural connections could be obtained. (Chem. Sci. 2021, 12, 2467-2473. DOI:10.1039/D0SC06180H )

Functionalization of peptides and proteins with hypervalent iodine reagents: An emerging area

The results obtained  in our group since 2015 for the functionalization of peptides and proteins with EBX reagents are highly promising. Other research groups have also used hypervalent iodine reagents for biomolecule functionalization. The potential for further applications is enormous, when considering the unique reactivity of hypervalent iodine reagents, combined with their stability in water and lower toxicity in comparison with metal reagents. This motivated us to write a review about this emerging area of research in 2021 ( Angew. Chem. Int. Ed. 2021, 60, in press. DOI:10.1002/anie.202112287) 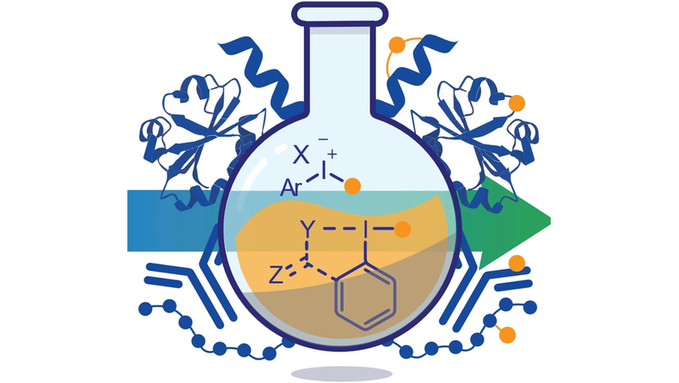