The ring-strain of cyclopropanes makes them very useful synthetic building blocks in organic chemistry. From the molecular orbitals point of view, they display a high SP2 character (Walsh orbitals) and have therefore often been considered as one-carbon homologues of olefins. The presence of a carbonyl or imine substituent activates cyclopropanes for cyclization and cycloaddition reactions, and this reactivity can be further enhanced by the introduction of a second donor group to give the so-called donor-acceptor substituted cyclopropanes (Synthesis 2009, 3353.   DOI: 10.1055/s-0029-1216998). Recently, the activation of other strained rings, such as cyclobutanes, has also begun to be more intensively investigated. In this context, our group is working on the development of new catalytic reactions involving activated small rings, with a particular interest in the use of a nitrogen atom as activating donor substituent (Chem. Commun. 2014, 50, 10912.   DOI: 10.1039/C4CC03194F ).

The Nazarov cyclization is the electrocyclic ring-closing of divinyl ketones to form cyclopentenones. Based, on the ring-strain of cyclopropanes, we developed the first catalytic formal homo-Nazarov cyclization (Org. Lett. 2009, 11, 1023. DOI: 10.1021/ol802970g). The catalytic reaction was made possible by the presence of two electron-donating groups (R3 on the cyclopropane and X on the double bond), which stabilized carbocationic intermediates in the reaction. First developed for electron-rich aromatic ring in R3, the reaction was then extended to nitrogen group at this position. At this point, the methodology became useful for the synthesis of aspidosperma alkaloids (Angew. Chem., Int. Ed. 2010, 49, 5767. DOI: 10.1002/anie.201001853). 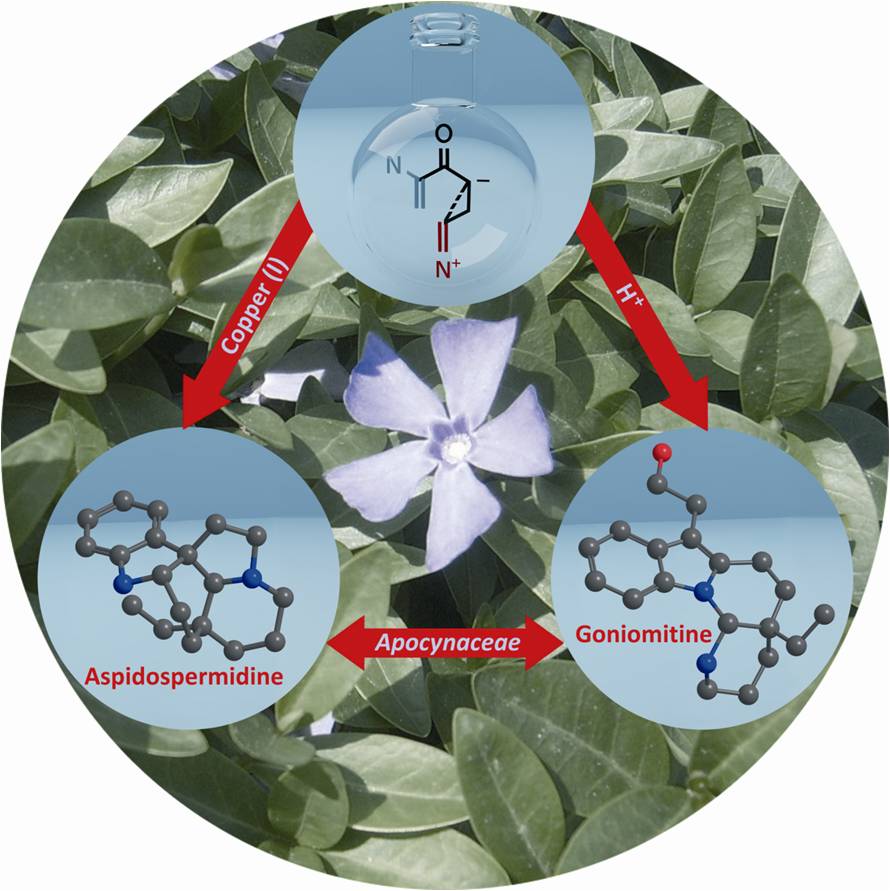 In the case of free indoles as nucleophiles, both cyclization on the C3 carbon or the N1 nitrogen where observed. The regioselectivity of the reaction could be controlled by the choice of solvent and catalysts: Cu catalyst in acetonitrile gave C3, and toluene sulfonic acid in dichloromethane N1 selectivity. This allowed us to accomplish both the formal total synthesis of aspidospermidine and the total synthesis of goniomitine (Angew. Chem., Int. Ed. 2010, 49, 5767. DOI: 10.1002/anie.201001853).

Despite its very rare structure, there was no report about the bioactivity of goniomitine. In collaboration with Prof. Jürg Gertsch at the University of Bern, we examined the antiproliferative effect of the natural product and several of its analogues.  Only a weak cytotoxicity was observed against several cell lines (29-120 microM). Non-cytotoxic alkaloids are relatively rare, and further investigations are currently ongoing to find other biological targets of this rare natural product. This collaboration was initiated in the framework of COST CM0804, an Europe-wide effort towards the study of chemical biology with natural products.

After having achieved the synthesis of goniomitine and aspidospermidine, we wondered if the formal homo-Nazarov strategy could be applied to the synthesis of Jerantinine E, a bioactive alkaloid isolated by Kam and co-workers from the Malayan plant Tabernaemontana corymbosa. This alkaloid had never been synthesized before and its biological mode of action was unknown. The total synthesis of jerantinine E was indeed achieved in 17 steps and 16% overall yield based on four key steps (Angew. Chem., Int. Ed. 2013, 52, 13373. DOI: 10.1002/anie.201305533):
1) Copper-catalyzed formal homo-Nazarov reaction, which proceeded in 92% yield-
2) Installation of the electron-withdrawing ester group via reduction, carbocation generation, cyanation and Pinner methanolysis. The installation of the ester group on an early stage of the synthesis was essential to avoid the decompositions of oxidation sensitive intermediates.
3) Formation of the fifth ring of the natural product via a three-step one-pot bis-alkylation protocol developed by Rawal and co-workers.
4) Selective oxidative deprotection of one of the methoxy group.

With significant amounts of jerantinine E now available, our collaborators at EPFL (Group of Prof. Sandrine Gerber ) and at the Helmholtz Institute (Group of Dr. Florenz Sasse ) were able to identify tubulin as the target of the natural product. Indeed, an inhibition of the polymerization of tubulin was well visible in presence of jerantinine E.

From cyclization to annulation

During our work on the total synthesis of natural alkaloids, we discovered the exceptional properties of aminocyclopropanes in cyclization reactions. At this point, we realized that more convergent [3+2] annulation reactions of aminocyclopropanes with olefins and carbonyls were unprecedented. Such processes would have an impressive potential for the synthesis of bioactive natural products, such as aristeromycin or palau’amine, drugs such as ramipril or biomolecules such as DNA and its synthetic analogues. In 2011, we discovered the first catalytic [3+2] annulation reactions of aminocyclopropanes, both with enol ethers (Angew. Chem., Int. Ed. 2011, 50, 12075. DOI: 10.1002/anie.201106255) and aldehydes (Org. Lett. 2012, 14, 386. DOI: 10.1021/ol203144v ) and ketones (Chem. Eur. J. 2012, 18, 4844. DOI:10.1002/chem.201103971 ) . Key for success was the correct modulation of the electronic properties of the donor (phthalimide) and acceptor (diester) groups. In particular, the reactions with enol ethers and ketones were enantiospecific, giving access to enantioenriched cyclopentylamines.

A major limitation of the originally developed protocol was the requirement for succinimide and phthalimide as protecting groups. Cleavage of these groups can be challenging for cyclopentylamines and could not be achieved in the case of tetrahydrofurylamines. On the other hand, nucleoside analogues are a very important classe of bioactive compounds, including already 45 FDA approved drugs. We speculated that thymine-substituted cyclopropanes could display similar reactivity as imido cyclopropanes. Indeed, this was the case, and we were able to develop a [3+2] annulation reaction using thymine, uracil and fluoro-uracil substituted diester cyclopropanes with enol ethers, aldehydes and ketones (Angew. Chem., Int. Ed. 2014, 53, 8484. DOI: 10.1002/anie.201404832). 20 unprecedented nucleoside analogues could be obtained using the method and further functionalized. The compounds have been included at the screening facility of EPFL for the discovery of new bioactivities.

The broad availability of thioalkynes in our group encouraged us to examine this unprecedented class of substrates in [3+2] annulation reactions. Interestingly, two different products were obtained in dependence on the substituent of the alkyne: the expected [3+2] annulation product with silyl groups and an unprecedented polycyclic scaffold with alkyl groups (Chem. Eur. J. 2016, 22, 11997. DOI:10.1002/chem.201602755).

In 2017, the [3+2] annulation of aminocyclopropanes could be extended for the first time to electron-poor N-heterocycles. The reaction worked well for both quinolines and electron-poor pyridines. It was the first time that Donor-Acceptor cyclopropanes could be used to dearomatize efficiently this type of heterocycles. The obtained compounds are important building blocks for the synthesis of indolizidine alkaloids. (Chem. Sci. 2017, 8, 7112. DOI:10.1039/C7SC03197A ).

The exceptional reactivity of aminocyclopropranes is not limited to [3+2] annulation reactions. Simple ring-opening reactions also give access to very useful nitrogen-rich building blocks. For example, the scandium-catalyzed Friedel-Crafts alkylation of indoles and other electron-rich aromatic compounds led to the formation of important gamma-aminobutyric acid (GABA) derivatives (Org. Lett. 2013, 15, 3738. DOI:10.1021/ol401616a ) .

As the [3+2] annulation process is enantiospecific, the synthesis of enantio-enriched products requires the use of enantiopure aminocyclopropanes. However, standard protocols for asymmetric cyclopropanation did not work in the case of vinyl phthalimide. Another possibility would be to develop a dynamic kinetic asymmetric annulation starting from racemic aminocyclopropanes. This approach was successful and enantiomeric ratio up to 98:2 could be achieved using succinimide-substituted cyclopropanes and a cationic copper tBuBOX catalyst with perchlorate as counterion (J. Am. Chem. Soc. 2014, 136, 6239. DOI:10.1021/ja5024578 ). A speculative model for asymmetric induction was proposed based on the distorted square planar structure of copper-tBuBOX complexes: fast attack of the nucleophile is possible only on one of the diastereomeric complexes formed from the racemic cyclopropane; the other complex consequently does not react and ring-opening and racemization can occur.

A disadvantage of the DYKAT approach is the challenging control over both reaction kinetics and facial selectivity to achieve high enantioselectivity. In 2018, we reported another approach based on the desymmetrization of meso diaminocyclopropanes. The developed urea-fused cyclopropanes could be used for the highly enantioselective Friedel-Crafts alkylation of indoles. To achieve high enantioselectivity, it was necessary to develop a new bifunctional BOX ligand bearing free hydroxy groups. A this stage, the mode of asymmetric induction is highly speculative. We proposed a model based on hydrogen bonding between the ligand and the diester groups on the cyclopropane, inducing a specific conformation of the tert-butyl groups leading to selective blocking of one of the two reactive positions. (Angew. Chem., Int. Ed. 2018, 57, 5120-5123. DOI:10.1002/anie.201800494)

The field of enantioselective transformations of cyclopropanes is currently in full expansion. In 2020, we published a comprehensive review about this area, describing the key strategies to achieve such processes. (Chem. Rev. 2020, in press. DOI:10.1021/acs.chemrev.0c00109) 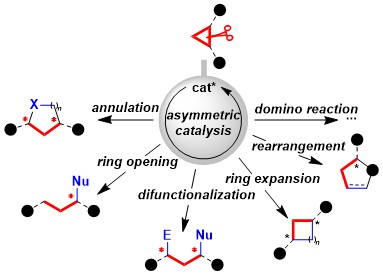 Up to 2013, our work had focused mostly on [3+2] annulation reactions to access cyclopentylamines and tetrahydrofurylamines. We wondered if the polarization strategy successful for cyclopropanes could be extended to cyclobutanes. The resulting [4+2] annulation reactions would give access to cyclohexylamines and tetrahydropyranylamines, which are omnipresent in bioactive compounds. Nevertheless, the required class of donor-acceptor cyclobutanes was unknown. We consequently first developed a new iron-catalyzed [2+2] cycloaddition between enimides and alkylidene malonates (Angew. Chem., Int. Ed. 2013, 52, 9009. DOI: 10.1002/anie.201303803). The method could be used also with substituents on the enimide and on the methylidene malonate to give poly-substituted aminocyclobutanes. Using the obtained aminocyclobutanes, an efficient [4+2] annulation could be developed (Org. Lett. 2015, 17, 1030. DOI:10.1021/acs.orglett.5b00149). The transformation worked for the synthesis of both cyclohexyl- and tetrahydropyranyl- amines. It was also successful for thymine- or uracil-substituted cyclobutanes.

Our research program on Donor-Acceptor aminocyclopropanes has been highly successful. Nevertheless, the presence of the two ester groups can be a drawback, as they are usually not desired in the product and need to be removed. Therefore, we turned to the activation of simple mono-substituted aminocyclopropanes. In 2019, we had a first success in this area. Upon oxidation with N-iodosuccinimide, aminocyclopropanes can be opened to the corresponding highly reactive iodinated imines. The latter constitute an interesting dielectrophilic synthon, in contrast to Donor-Acceptor cyclopropanes, which have zwitterionic reactivity. Nucleophilic substitution and addition then delivered a broad range of functionalized propyl amines. (Angew. Chem. Int. Ed. 2019, 22, 9123-9127. DOI:10.1021/acs.orglett.0c03528 ) 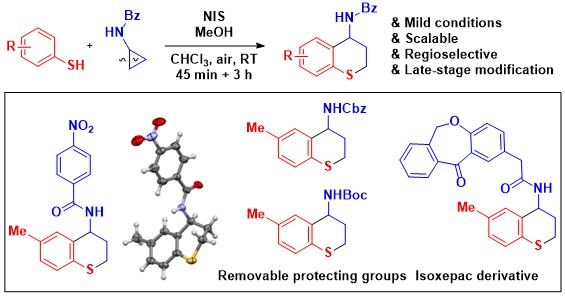 Fluorinated compounds are very important in synthetic and medicinal chemistry. However, we could not introduce fluorine atoms in our first developed method for the oxidative ring opening of aminocyclopropanes. In 2020, we turned to photoredox catalysis to achieve such a transformation: In presence of cheap benzophenone as photocatalyst and Selectfluor as oxidant/fluorine source, an efficient oxidative fluorination of cyclopropylamides was achieved. A range of different nucleophiles could be again added to the formed iminium intermediate (Angew. Chem., Int. Ed. 2020, 59, 16420-16424. DOI:10.1002/anie.201907060).

In 2018, we started a new research program involving a further class of activated small rings: the cyclopropenes. The double bond in these compounds is highly strained and reactive, which appears to us highly promising for developing new transformations. However, several attempts using transition metal or Lewis acid activation were thwarted by concurring polymerization side reactions. In 2019, we were finally successful and reported a new annulation reaction combining aminocyclopropanes and cyclopropenes. Under photoredox conditions, an oxidative ring-opening of the aminocyclopropanes occurred, and the formed radical added rapidly to the double bond of the cyclopropenes. Cyclization then led to bicyclo[3.1.0]hexanes, which are important scaffolds in synthetic and natural bioactive compounds. In the case of difluorocyclopropenes, the reaction proceeded with good diastereoselectivity (Chem. Sci. 2019, 10, 10716-10722. DOI:10.1039/C9SC03790J).

We then wondered if the addition of N-centered radicals to cyclopropenes could also be achieved. Such a process had not been reported before. Based on our experience in the generation of azide radicals, we first decided to examine these species. Indeed, addition of  azide radicals to the double bond of cyclopropenes was successful. However, the formed intermediates were unstable and ring opening occurred, resulting in the formation of alkenyl nitriles. An interesting application of such products was an oxidative photocyclization to give polycyclic aromatic compounds, which are important for applications in medicinal chemistry and materials science (Angew. Chem., Int. Ed. 2020, accepted for publication. DOI:10.1002/anie.202013516).