I am a collaborateur scientifique (postdoctoral researcher) at the École Polytechnique Fédérale de Lausanne working in the research group of Kathryn Hess. I am currently on the academic job market, seeking tenure track positions. For more information check out my CV (last update: February 2022). You can also contact me via nima.rasekh [at] epfl.ch.

Before that I was a postdoctoral researcher at the Max Planck Institute fur Mathematik and before that I was a PhD student at the University of Illinois at Urbana-Champaign, where I worked with my advisor Charles Rezk.

I also taught a course on higher categories. You can find the lecture notes here.

Essentially, if you see this scene on the EPFL campus, then it’s probably me: 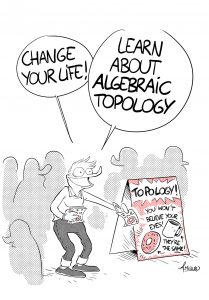