Predetermined and selective placement of nanoparticles onto large-area substrates with nanometre-scale precision is essential to harness the unique properties of nanoparticle assemblies, in particular for functional optical and electrooptical nanodevices. Unfortunately, such high spatial organization is currently beyond the reach of top-down nanofabrication techniques alone. Here, we demonstrate that topographic features comprising lithographed funnelled traps and auxiliary sidewalls on a solid substrate can deterministically direct the capillary assembly of Au nanorods to attain simultaneous control of position, orientation and interparticle distance at the nanometre level. We report up to 100% assembly yield over centimetre-scale substrates. We achieve this by optimizing the three sequential stages of capillary nanoparticle assembly: insertion of nanorods into the traps, resilience against the receding suspension front and drying of the residual solvent. Finally, using electron energy-loss spectroscopy we characterize the spectral response and near-field properties of spatially programmable Au nanorod dimers, highlighting the opportunities for precise tunability of the plasmonic modes in larger assemblies. 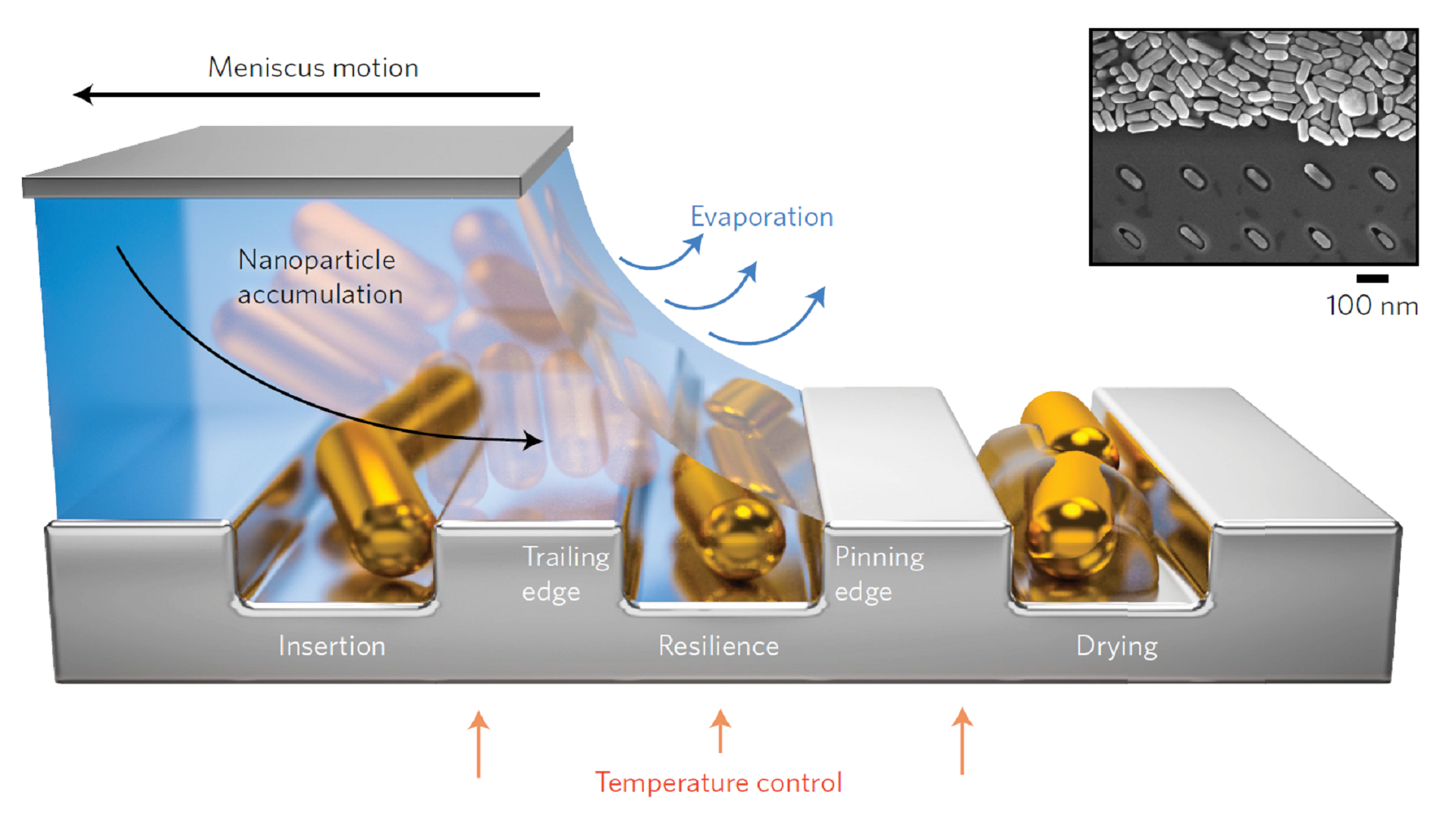 Our work on nanoscale assembly:

Our work on microscale assembly:

Self-assembly of micro-components allows us to assemble huge number of micro-objects in scalable and parallel manner where the standard pick-and-place approach is fastidious. We demonstrate self-assembly of simple bicolor SU-8 cylinders as well as half capsules for liquid encapsulation and release. To ensure a successful encapsulation, face-selective surface functionalization has to be done by a silane “lift-off-like” process resulting in only one surface selectively more hydrophobic than all other ones. The half-capsules could be self-assembled in aqueous solutions into complete capsules encapsulating the solution with a yield above 95%, which could also be subsequently released in another medium.

We demonstrate self-assembly of microstructures by magnetic force. Microstrucutres of a superparamagnetic composite have been fabricated by inkjet printing. The structures have been made such that they involve magnetic easy axis. Bringing the structures in a fluidic phase allows to control them by an external magnetic field, allowing their self-organization and self-assembly. As a demonstrated their attraction and repulsion is shown as well as their self-organization into lines.

100 um half-capsules are fabricated by photolithography based on a prefabricated silicon substrate. The half-capsules are made hydrophilic except one surface kept hydrophobic. This allows in a fluidic phase to selectively precipitate a polymer solution – acting as a UV-glue – onto the surfaces of the half-capsules which will self-assemble into complete capsules. This leads us to sealed microcapsules encapsulating surrounding media. As a proof of concept, colored ink as been encapsulated.