This is a temporary outcome of the work on the WiRE-LES code before possible GPU acceleration.

Large-eddy simulation (LES) has become popular in the simulations of atmospheric boundary layers (ABLs) since it is able to reproduce the important turbulence motions with a relatively low computational cost compared with direct numerical simulation (DNS). In LES, the large-scale turbulence is explicitly resolved by solving the spatially filtered Navier-Stokes equations, while the effect of the subgrid-scale (SGS) motions is represented through the parameterization of the SGS stress using a SGS model. During the past years, the Wind Engineering and Renewable Energy (WIRE) laboratory at EPFL has made significant contributions to the development and application of LES. Examples include the development of advanced SGS models, the study of the interactions between large wind farms and ABLs, the characterization of coherent structures in the ABLs, and the investigation of the flow and scalar transports in the ABLs above urban surfaces. Recently, a framework of coupling the mesoscale weather prediction model with the microscale LES model is being developed to yield more accurate simulations of wind and turbulence over complex terrain, hence more reliable forecasts of power productions of wind farms. The LES framework has also been coupled with vegetation dynamics to study the long term impact of land cover changes on wind energy potential.

The WIRE laboratory has developed the WIRE-LES code for various applications of LES. Characteristics of the code include the staggered grid arrangement and the spatial derivatives of flow variables in the horizontal directions are calculated based on the pseudo spectral method, while the second-order central difference method is used in the vertical direction. This arrangement allows the code to solve the pressure equation (for incompressible flow) efficiently in each time step without the need of iteration. All nonlinear terms in the spatially filtered Navier-Stokes equations are de-aliased in Fourier space by the 3/2 rule. The second-order Adams-Bashforth scheme is used for time marching.

The WIRE-LES code is highly portable and has previously been run on various clusters at the Minnesota Supercomputing Institute, the EPFL HPC Center, the National Center for Atmospheric Research (NCAR), and CSCS. The WIRE-LES code has been written in FORTRAN and parallelized using horizontal slab decomposition and MPI for inter-processor communication. The parallel pressure solver is based on a very efficient direct method which applies FFT in horizontal plans and solves the reduced tridiagonal linear system directly in parallel.

SCITAS support was required to

The profile runs were done on a 512x512x16 regular grid, on a single cluster node. The profiling was performed using Intel VTune Amplifier 2017.

The code has been compiled with:

The modules loaded at compilation time are:

The command line used to obtain the traces on a single node has been:

The collector results are finalized and visualized in the GUI on the head node with:

The summary and bottom-up views are shown in the figures below: 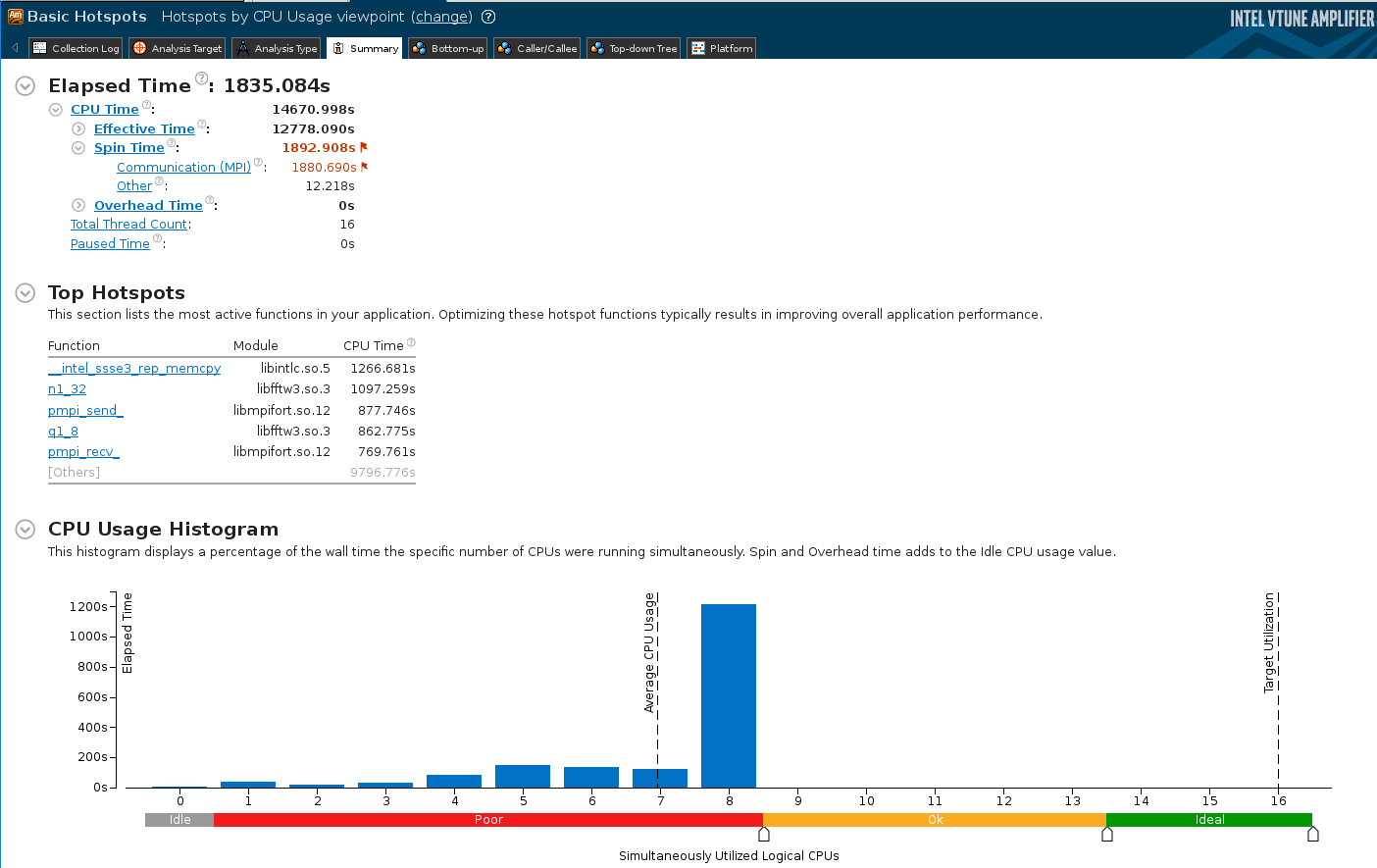 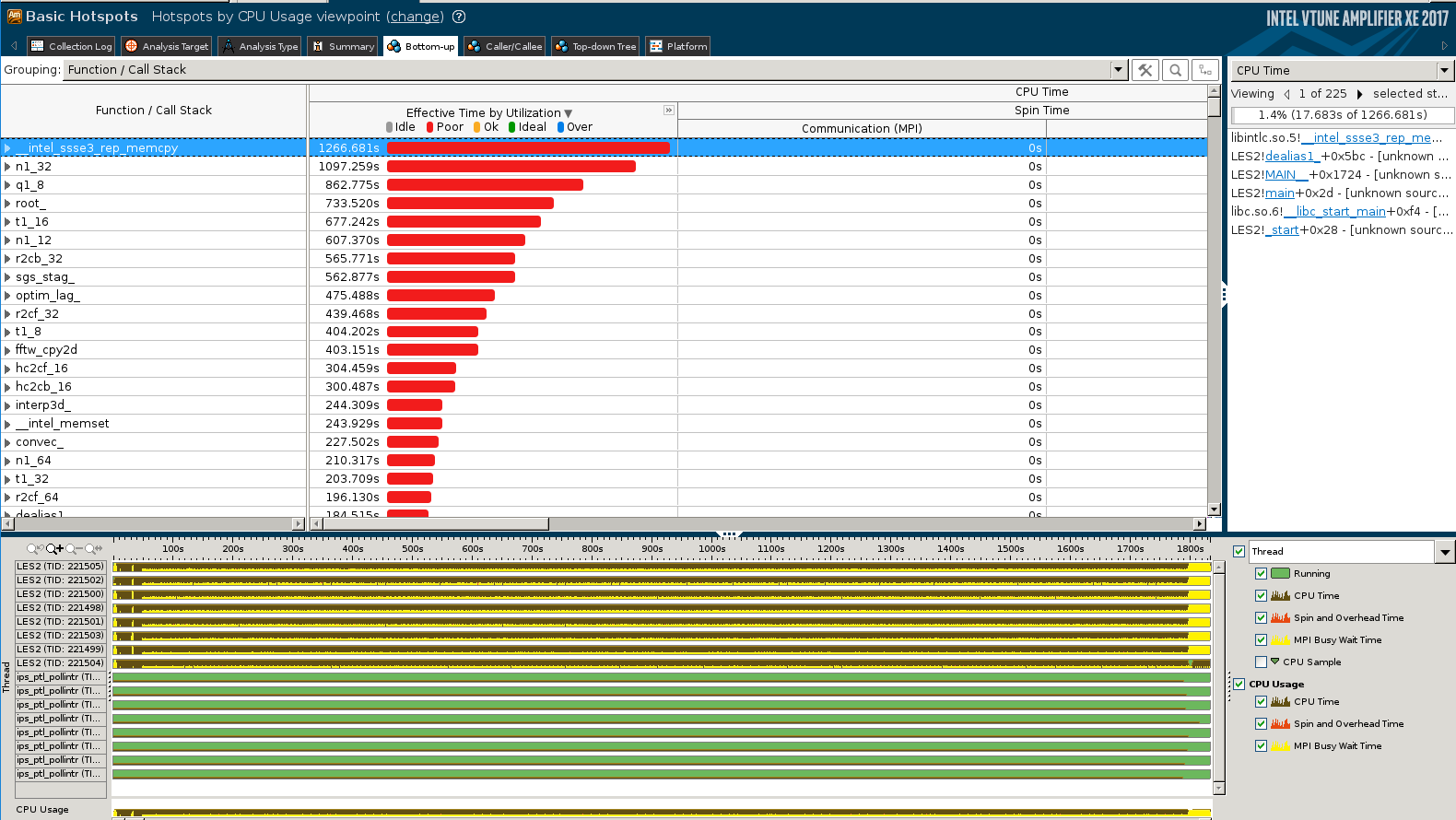 Based on the analysis, the following optimizations have been suggested:

So far, the following optimizations have been performed

For the optimized code with 2 openmp threads per mpi task, the summary and bottom-up views are shown in the figures below: 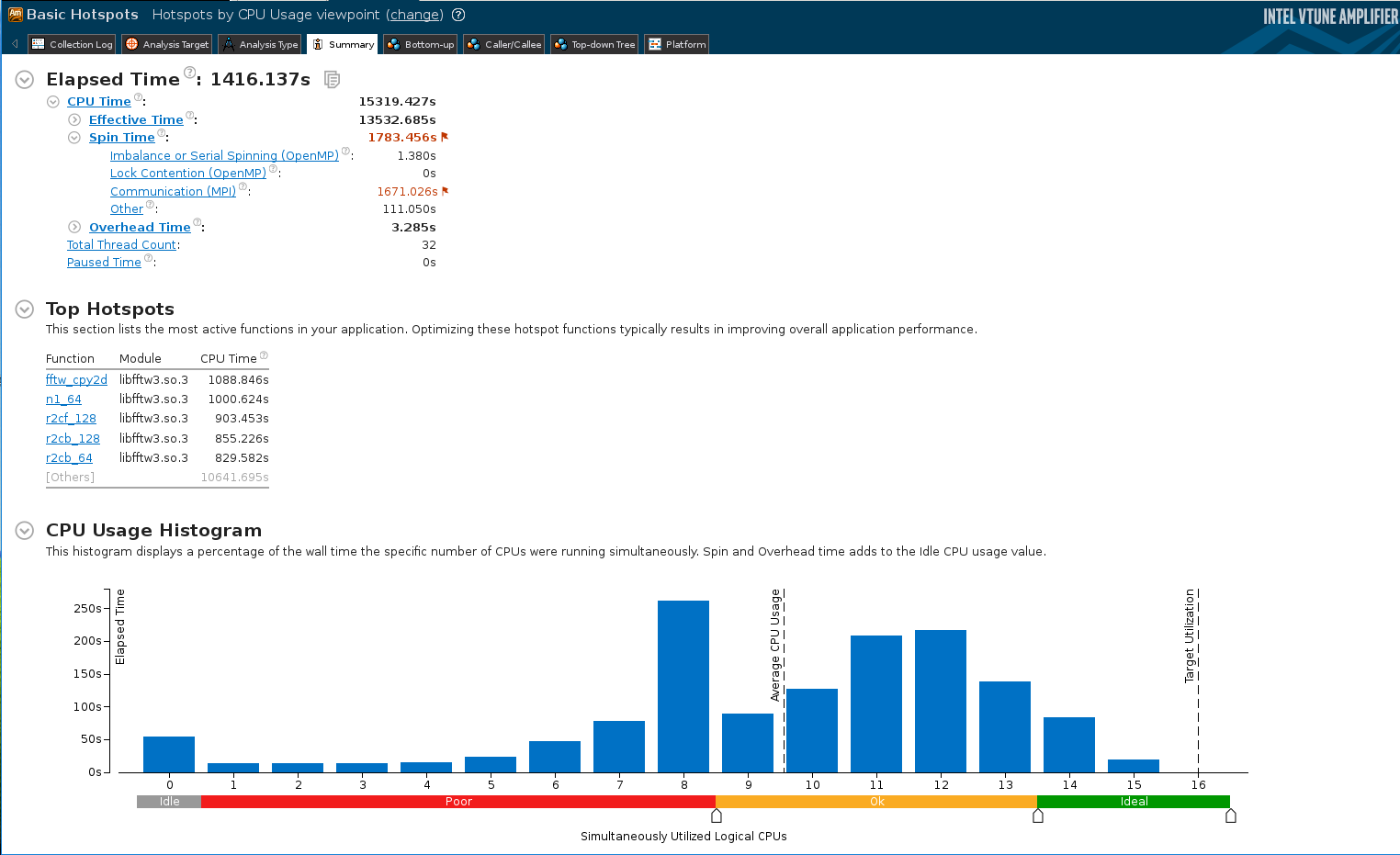 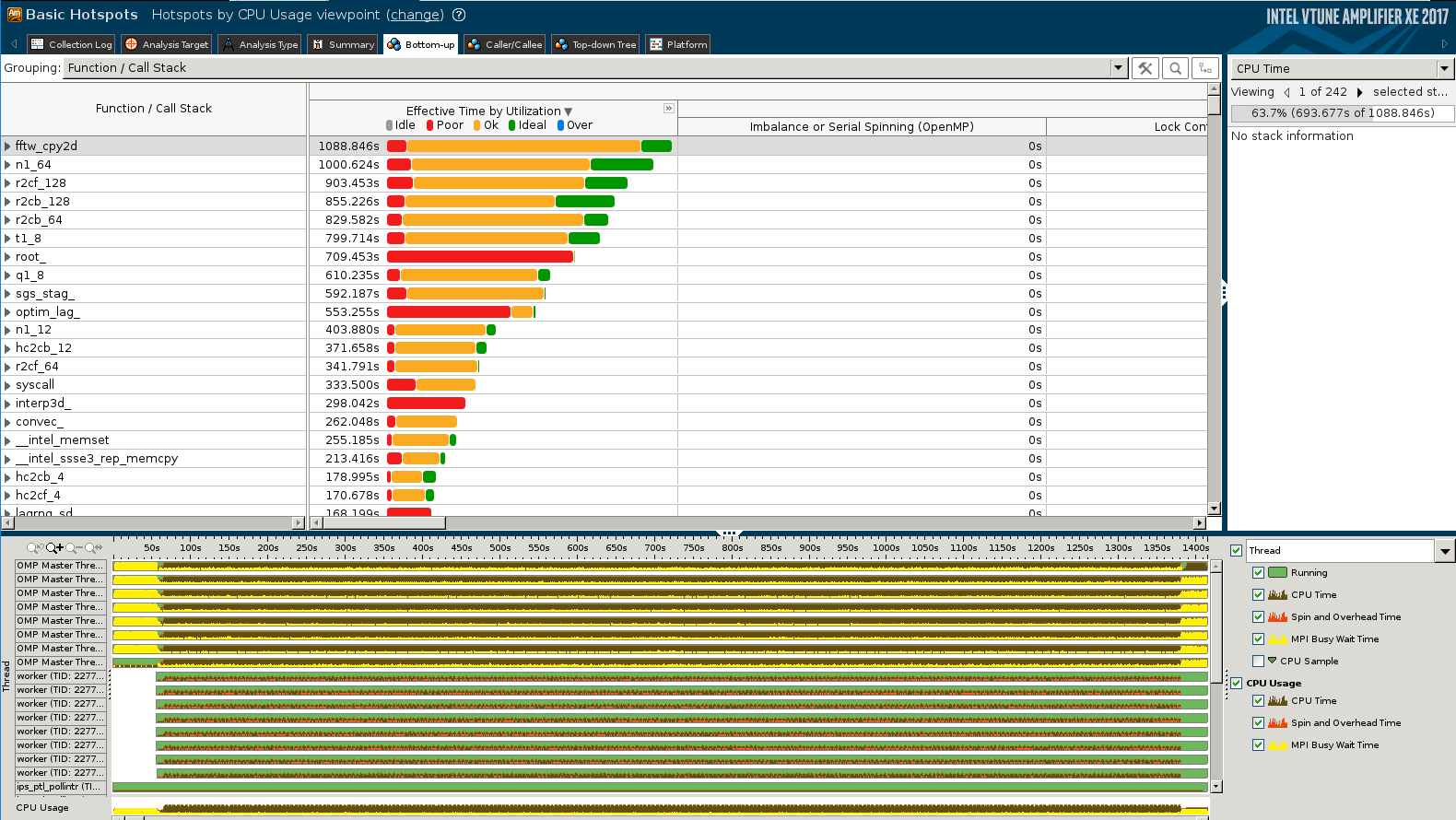 With 4 openmp threads per mpi task, the elapsed time was further reduced to 975 s. Temporary conclusions