ScanVan: A vehicle for scanning cities 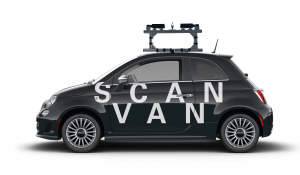 Thanks to the support of the Swiss National Fund NRP 75 Big Data, the ScanVan project has developed a new “spherical” camera and a dedicated vehicle to allow the easy digitisation of Swiss and European cities. Conventional cameras always have a limited field of view. On the contrary, the ScanVan camera is capable of perceiving in all directions simultaneously. Mounted of a small car, it permits to digitise a city simply by driving once in each of its streets.

A new kind of camera

At the heart of ScanVan camera is a hyperbolic mirror whose shape has been mathematically calculated to reflect light rays from all directions to two high-resolution sensors. The camera thus behaves like a sphere that perceives its environment. All the rays virtually converge on its centre.

The first prototype of the device was produced at the HES-SO in Sion. To design the central mirror of the device, a manufacturing process using diamond turning was used. The double-sided mirror is produced from a single piece of aluminium with an additional coating. The resulting mirror quality is high enough to require no polishing.

A fundamental characteristic of spherical cameras, which distinguishes them from standard cameras, is that, by nature, if a point is seen by the camera, a camera placed at that point would also see the point of origin. Traditional photogrammetric methods can therefore be adapted to take account of the specific properties of these cameras.

To make this operation efficient, the Sion team adapted the device so that it could be ‘mounted’ on a small car. Thus equipped, this ScanVan only has to move in a city to produce a three-dimensional model of its environment. No special skills are needed to operate it. The device digitises its environment automatically.

The ScanVan captures spherical images at regular intervals. To produce the 3D model, the consecutive spherical images are automatically compared. The numerous common points visible in the two images are identified and their position in space is calculated by triangulation. The models are then densified, combined and finally placed back into the geographical space so that they can be superimposed on the real space.

The ScanVan only has to pass through a street once to digitise it and make it virtually explorable. Little by little, a three-dimensional copy of the real world is built.

To explore this flow of new data, a web navigation interface has been developed at EPFL. The challenge is to accommodate the high-resolution data from the ScanVan and combine it with other models produced by satellite images, aircraft and drones. The project’s navigation interface allows moving fluidly between these different scales. It also includes the possibility to go back in time when older 3D models are available. It is thus possible to navigate in four dimensions.

The creation of a digital double of the real world raises potential privacy issues. In 2020, the University of Zurich joined the project to study this aspect in the light of Swiss and European law. It was decided that the interface would be designed to incorporate this aspect intrinsically into its operation. Algorithms were programmed to erase from the captured spherical images all aspects of reality that could identify people or vehicles. Additionally, an annotation interface makes it easy for anyone to point them out and request their removal. The challenge is to make the mirror world thus constructed a public space that respects privacy.

The ScanVan can start digitising any city that requests it. The challenge is to progressively create a digital duplicate of each Swiss city and to offer the data collected as a common good usable by all. The reconstructed models can indeed be used for multiple purposes.

Thanks to city digital twins becomes possible to annotate space, to travel in time, to offer services and applications of a new kind. For a city, having a digital twin also makes it possible to envisage the safer and more efficient development of autonomous vehicles within the city by defining precise virtual corridors where cars and drones can circulate. In return, these vehicles enrich and update the 3D model of the city.

By its very nature, a spherical camera can be produced at any size while retaining its fundamental properties. One day, it will probably be possible to build one the size of a small marble that fits in your hand and that you can take out of your pocket to digitise or update the space in which we find ourselves in a few seconds. ScanVans are the first prototypes of this coming world.