Annual award introduced in 2014 to recognize junior members of IBI-associated labs qualifying as “exceptional young bioengineers showing potential to become part of a new generation of leaders of the discipline, fusing biology with engineering, physics, chemistry or mathematics.” (quote from Call for Applications).

The new and lasting name of the award was chosen to honor the IBI’s founding Director Jeffrey A. Hubbell (in office: Oct. 1, 2003 – Sept. 30, 2012), and his direct successor Melody A. Swartz (in office: Oct. 1, 2012 – April 30, 2014) as both were leaving the EPFL in December 2016, headed for new academic horizons. It stands as a modest token of the IBI’s immense appreciation of their priceless contribution in building the institute and leading it to remarkable stature in little more than a decade.

Applications are now invited from postdocs and advanced Ph.D. students.

Submissions from eligible candidates, as defined in the 2022 Call (see below), should be emailed in single file pdf format to Institute Manager Dietrich Reinhard

All relevant details are given in the official Call document, which is available here:

For the first time this year, the Hubbell-Swartz Award Jury, put before a near impossible choice between two equally strong candidates, has decided to exceptionally crown not one, but two laureates.

Cao, an applied chemist trained at the East China University of Science and Technology in Shanghai, China (B.Sc. Degree in 2013), did her Ph.D. (awarded March 2017) in Prof. Yitao Long’s Key Laboratory for Advanced Materials, at the same Department. In her doctoral and post-doctoral research, Cao has made groundbreaking discoveries in the area of biological nanopores, which have led to first-author papers in high profile journals such as Science Advance, Nature Communications or Small. She has also co-authored two patents translating parts of this new knowledge into biotechnology and information technology applications. Already a Marie Skłodowska-Curie Postdoctoral Fellow, a Peter and Traudl Engelhorn and a Synapsis Foundation Fellow, Chan Cao will be starting an independent EPFL research group as an SNSF PRIMA Fellow in 2021.

Sesterhenn, holder of B.Sc. and M.Sc. degrees in Molecular Medicine from the Albert-Ludwigs-University in Freiburg, Germany, joined the Correia Lab as doctoral student in October 2015, where he obtained his Ph.D. in 2019. His research efforts, aimed at engineering targeted vaccines and diagnostics beyond the natural protein repertoire, have led to important biomedical developments such as a cocktail of computationally designed immunogens eliciting virus neutralizing antibodies in primates, computationally designed de novo proteins with complex structural motifs, which are functional as biosensors for the detection of epitope-specific antibodies in serum, or the identification of a promising application of epitope-focused immunogens to boost neutralizing antibodies under conditions of pre-existing immunity. Over the past two years, these findings have led to first-author papers (published or accepted) in Science, Nature Chemical Biology and PLoS Biology, as well as two patents. As his next career step, Fabian Sesterhenn is joining the lab of Paola Picotti at the ETH Zurich’s Institute of Molecular Systems Biology, for postdoctoral research.

All four finalists were invited to give a talk at the annual EPFL Bioengineering Day that took place online on November 12, 2020:

Fabian Sesterhenn (formerly Ph.D. student, then Postdoc, in the Correia Lab): “Toward a New Age of Precision Vaccines Through Computationally Designed Proteins“

Chiappino-Pepe, a Chemical Engineer trained at Complutense University in Madrid, Spain (Diploma Degree in 2013), did her Ph.D. (awarded May 2018), as well as initial post-doctoral work, at EPFL in the Hatzimanikatis Lab. In her doctoral research, Chiappino-Pepe used systems biology approaches to analyze cellular and drug action mechanisms in the malaria parasites. After half a year of post-doctoral work in the same lab, she moved to Harvard Medical School and the Wyss Institute for Biologically Inspired Engineering (Boston, MA, USA) as SNSF Postdoctoral Fellow in Molecular and Systems Biology, advised by Prof. George M. Church.

In a major recent contribution co-first authored by Chiappino-Pepe (RR Stanway, E Bushell, A Chiappino-Pepe et al, Cell, 179 (2019), pp. 1112-1128.e26), genes important for the entire malaria parasite life cycle, which reveal growth bottlenecks in Plasmodium to establish infection in mammalian hosts, are identified by a genome-scale knockout screen. This work, which provides future targets for drug development, is expected to have significant impact in the field of malaria research.

All four finalists were invited to give a talk at the annual EPFL Bioengineering Day that took place November 27, 2019, at the SwissTech Convention Center in Lausanne:

Kamilo Melo (Postdoc, Ijspeert Lab): “From a Fossil to a Robot… and All the Steps in Between“.

Tittl, post-doctoral researcher in the Altug Lab since 2015, is a physicist trained at the University of Stuttgart, Germany (Dipl. Phys 2011, Ph.D. 2015), where his research under the supervision of Prof. H. Giessen was already focused on sensing, imaging and plasmonics. His current research, carried out under the auspices ot the EPFL’s international postdoctoral fellowship programme, is dedicated to novel dielectric metasurface approaches for the imaging-based detection of molecular absorption fingerprints, as well as to mid-infrared phase control.

In another major co-first-authored recent contribution (Rodrigo and Tittl et al, Nature Communications 9, 2160, 2018), Tittl presented a mid-infrared biosensor based on a novel multi-resonant plasmonic metasurface, which, for the first time, is able to distinguish different molecular compounds in heterogeneous biological samples in-situ, non-destructively and in real-time by accessing distinct chemical fingerprint information. This new device can spectroscopically resolve the interaction of biomimetic lipid membranes with peptides, as well as the dynamics of synaptic vesical cargo release, which are biologically important mass-preserving processes that are inaccessible to standard label-free biosensors, regardless of their sensitivity.

All four finalists were invited to give a talk at the annual EPFL Bioengineering Day that took place November 1, 2018, at the SwissTech Convention Center in Lausanne:

Andreas Tittl (Postdoc, Altug Lab): “Imaging-based Biospectroscopy in the Palm of your Hand“ Nievergelt, doctoral student in the Fantner Lab since 2013, is a mechanical engineer trained at ETH Zurich (B.Sc. 2010, M.Sc. 2013) who perfectly embodies the Fantner Lab’s mantra according to which “a new bioinstrument is only as good as the science that can be done with it”. Although still at the beginning of his career, he already fully embraces the roles of both a technology enabler and a curiosity driven scientist. His contribution in the development of a novel Atomic Force Microscopy (AFM) imaging technique called photothermal off-resonance tapping (PORT) has allowed to reduce tip-sample forces by no less than one order of magnitude, which is truly remarkable.

Nievergelt has also developed a strong interest for biology and has made contributions enabling complex biological experiments such as the long-term observation of bacterial growth by AFM, and has provided important simulations and theoretical knowledge helping to advance our understanding of the mechanobiology of bacterial cells. These contributions have earned him co-authorship on several high impact publications.

Last but not least, Nievergelt is very committed to the idea of open science: he has put significant effort in the dissemination of his technology within the broad AFM community through a pilot project for open hardware. All four finalists were invited to give a talk at the annual EPFL Bioengineering Day that took place November 24, 2017, at the SwissTech Convention Center in Lausanne: 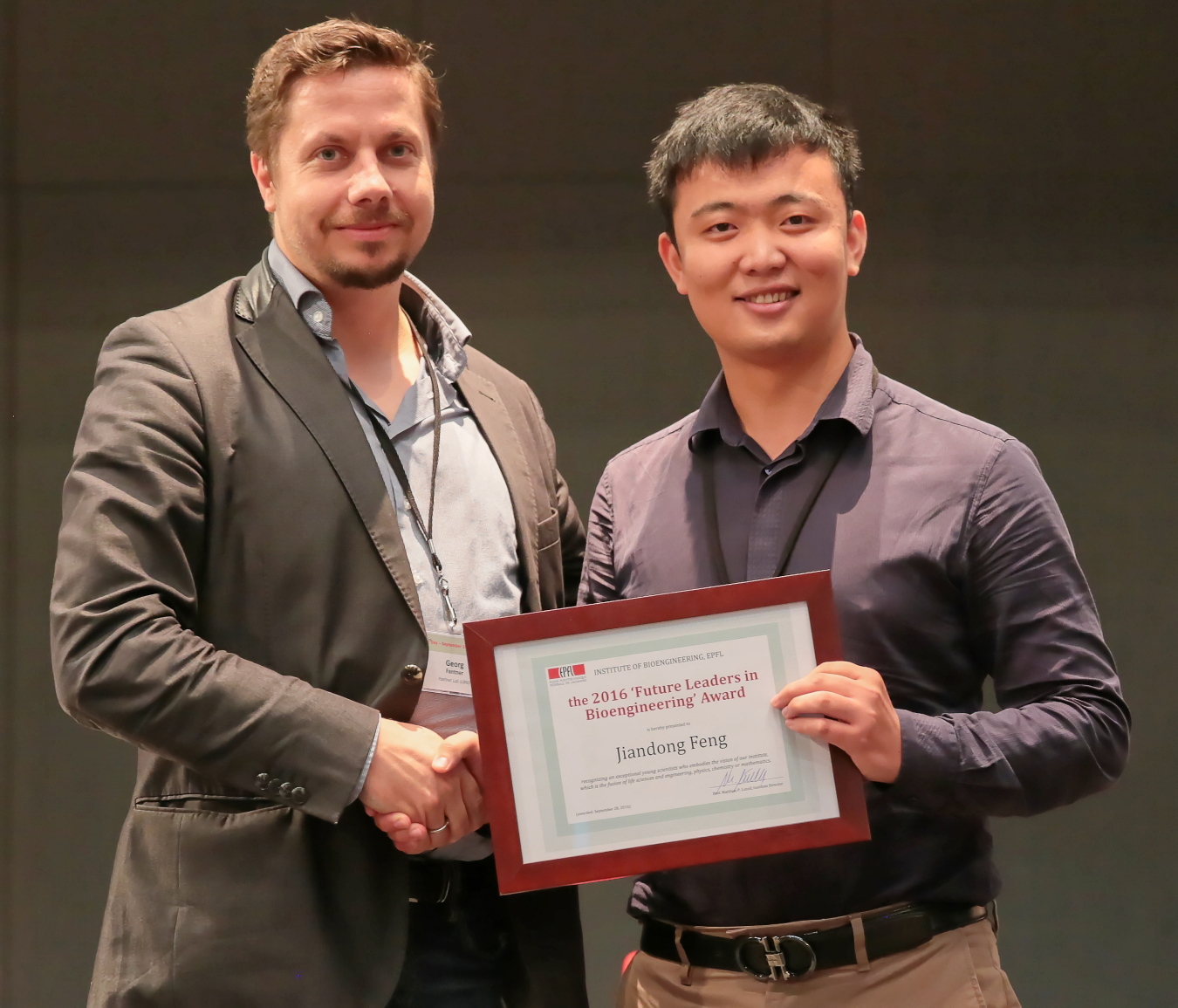 Feng, doctoral student in the Radenovic Lab until July 2016, is a trained chemist (B.Sc. 2013, Zhejiang University, China) who -already quite remarkably- was exceptionally admitted into the EPFL’s physics doctoral program without a Master degree. His doctoral work was in the field of solid state nanopores used as tools to probe chemical structures and physical processes at the single-molecule level, with an eye on next generation DNA sequencing. To date he has authored or co-authored 8 journal papers, including an amazing three first-author articles in Nature Nanotechnology (2015), Nature Materials (2016) and Nature (2016), as well as three patents. 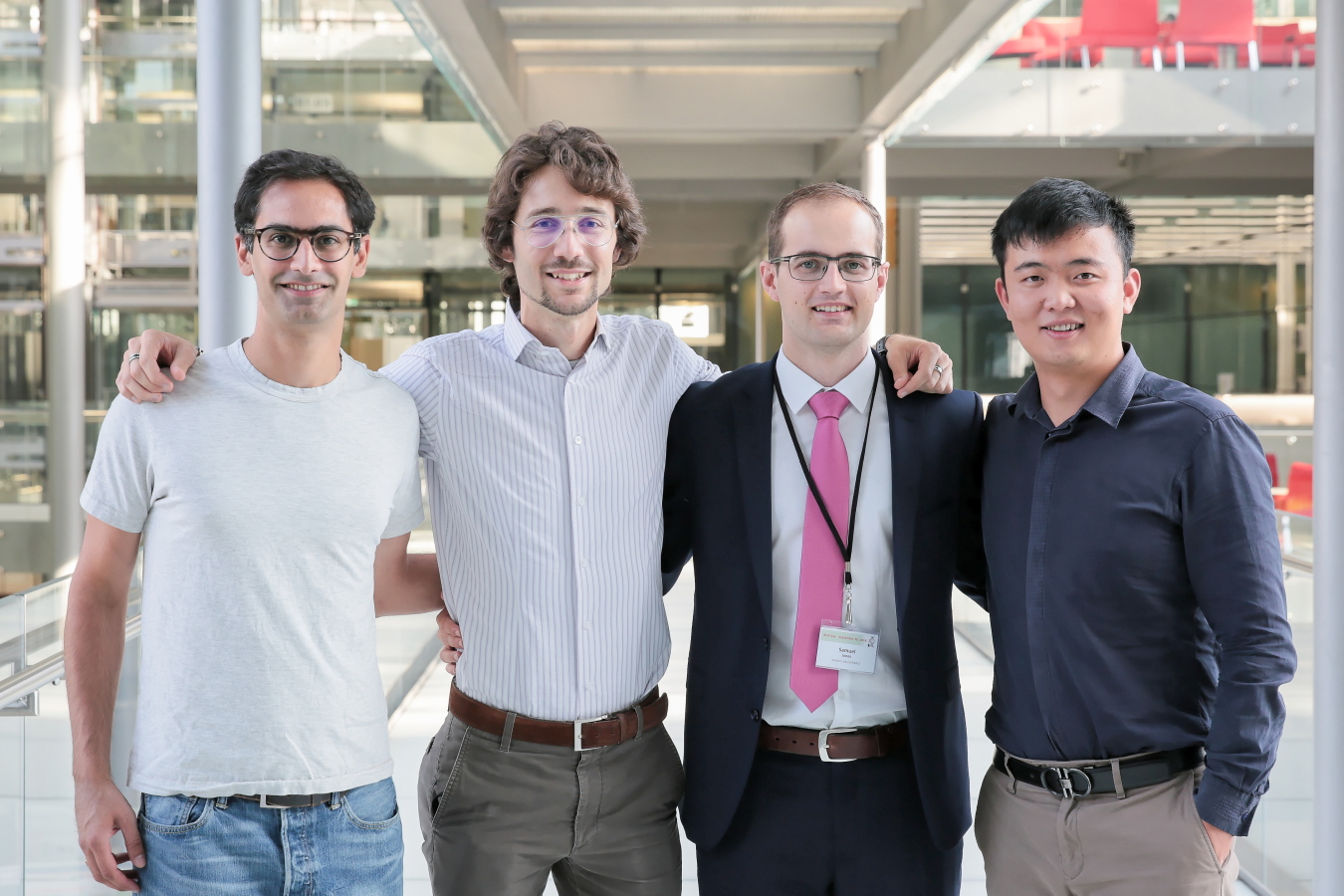 Bram Trachet from Nikos Stergiopulos’ Laboratory for Hemodynamics and Cardiovascular Technology (LHTC) wins the 2015 ‘Future Leader in Bioengineering Award’ in the Postdoc category.

Trachet, a trained electromechanical engineer (M.Sc. 2007, Ghent University, Belgium), has obtained his Ph.D. in Biomedical engineering at Ghent University in 2012 under the supervision of Patrick Segers, before joining the Stergiopulos Lab in 2013 as postdoctoral researcher in the field of aortic pathophysiology. He has produced seminal work applying Phase-Contrast X-ray Microtomography (PCXTM), a super high resolution 3D imaging modality, to the study of disease progression in mouse models of abdominal aortic aneurysms. In three years after obtaining his doctoral degree Trachet has authored or co-authored no less than 26 papers. 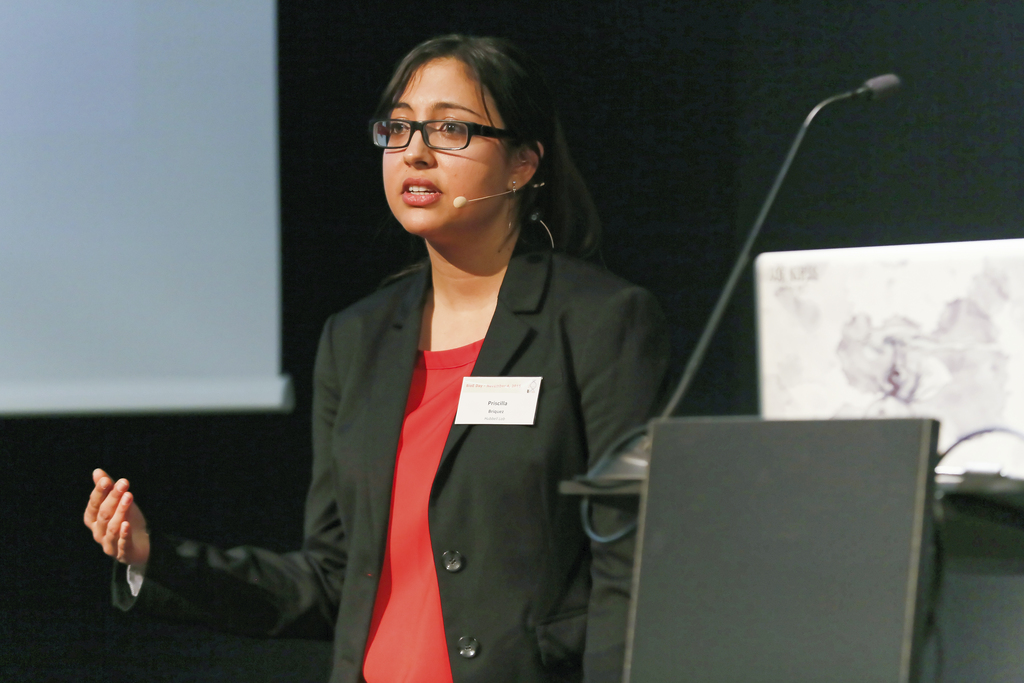 Briquez, doctoral student in Biotechnology and Bioengineering in the Hubbell Lab since 2012, is a trained bioengineer (M.Sc. 2011, EPFL, supervised by Jeff Hubbell). Her doctoral work is in the field of regenerative medicine, namely the biology of cytokine interaction with the extracellular matrix, with clinical application to wound healing. To date she has authored or co-authored a remarkable 9 papers (including a first-author article in Science in 2014), as well as a patent application (filed in 2013). 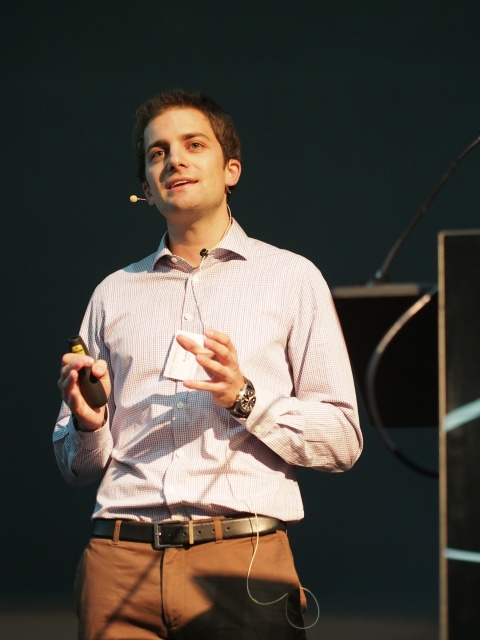 Rudolf Griss from Kai Johnsson’s Laboratory of Protein Engineering (LIP) was the first recipient of the IBI’s annual ‘Future Leader in Bioengineering Award’, newly established in 2014.

Griss, a Postdoc in the Johnsson Lab where he had obtained his Ph.D. in December, 2013, was at that time developing a platform technology for handheld in vitro diagnostic devices allowing instant measurements of precise analyte concentrations in single drops of body fluids at the point-of-care, the applications of which include patient self-monitoring for chronic diseases and therapeutic drug monitoring.

Rudolf Griss is a trained chemist (M.Sc. 2010, ETHZ) who as an undergrad has also attended programs at Cambridge University (UK) and Harvard University (USA). He is co-founder of the startup company Lucentix, launched early in 2014 and active in the field of instant measurement in vitro diagnostics.

Griss was nominated for the Award by his supervisor, as were 12 other Postdocs or advanced PhD students competing for the Award. Alongside three more finalists he was shortlisted for giving a talk at the EPFL Bioengineering Day held September 19, 2014, after which the Award Jury composed of five IBI Professors designated him as the winner of the 2014 Award, worth 1’000 Swiss Francs in cash. 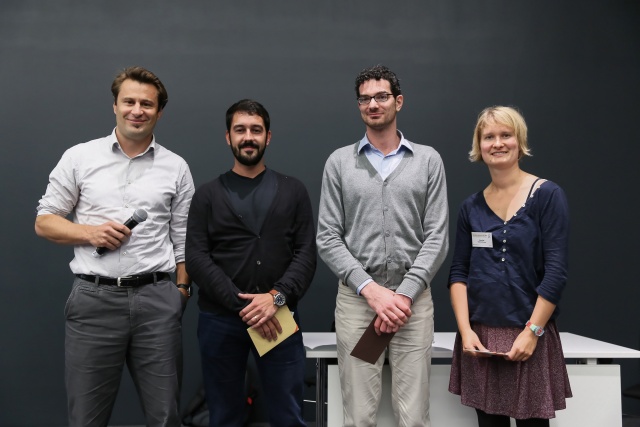