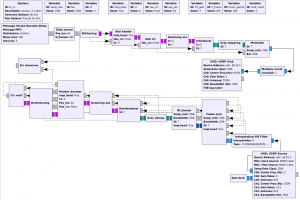 This is the fully-functional GNU Radio software-defined radio (SDR) implementation of a LoRa transceiver with all the necessary receiver components to operate correctly even at very low SNRs.

In the GNU Radio implementation of the LoRa Tx and Rx chains the user can choose all the parameters of the transmission, such as the spreading factor, the coding rate, the bandwidth, the presence of a header and a CRC, the message to be transmitted, etc.

If you find this implementation useful for your project, please consider citing the aforementioned paper.

You can find an improved and updated version of this single user transceiver in the GitHub repository. Which includes, among others, stability improvement, more efficient inter-block message passing, simplified usage, and small bug fixes.