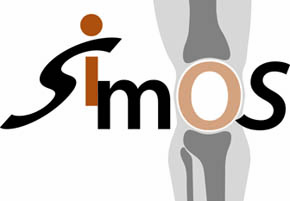 Smart Implant for Orthopedic Surgery (SImOS) is a multidisciplinary project with the aim of developing a prototype system constituted of implanted sensors and electronics, external sensors and electronics and a remote device to measure the knee joint function in the application case of a total joint prosthesis (see illustration).

While our overall objective is to propose systems that can be used with any existing joint prosthesis, this project will focus on a FIRST® knee joint prosthesis designed and produced by the industrial partner  which also involved in the project. The prototype will include numerous sensors to quantify the joint function in term of: 3D rotation, forces on the polyethylene insert, friction,  wearing of polyethylene, loosening of the tibial prosthesis part and spatiotemporal parameters of gait. To reach these objectives a balance between the implanted module, which should be minimal in size, number of components, power requirement and effect on the prosthesis function, and the external module, which is less constrained, will be found. 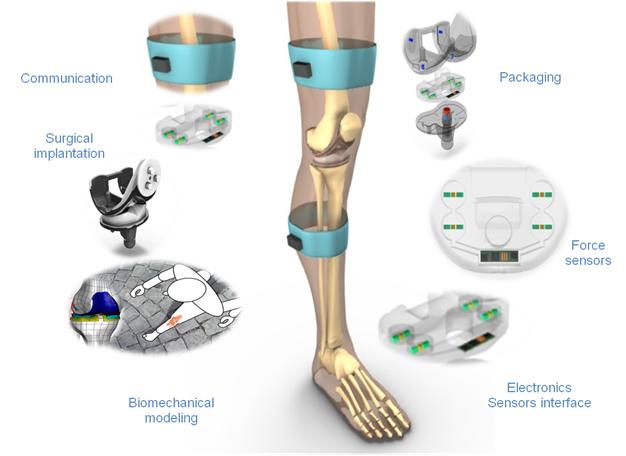 Although there are many portable sensor systems available to externally measure the kinematics , all of them suffer from the soft tissue artifact (STA), which dramatically decreases the accuracy and precision of the measurements. In-vivo measurements of kinematic parameters such as joint angle provide STA free information, which can be used not only to improve the measurements, but also to model the STA itself. Consequently, by measuring both kinetic and kinematic parameters of an artificial joint such as prosthetic knee, we can define metrics to evaluate in an objective way the joint function after arthroplasty.

The main role of LMAM in SImOS are:

Besides, a manual mechanical simulator of knee was designed and fabricated which is capable to simulate all 3D knee rotational movements and also can emulate and measure the total force of  different body weigths on the tibial tray. We also used Infera red motion capture system (Vicon®, UK) as a reference for the internal kinematics measurements.

A new knee simulator was designed to automatically generate the realistic patterns of different activities such as walking on treadmill. This simulator was used to validate the SImOS designed systems in realistic conditions.