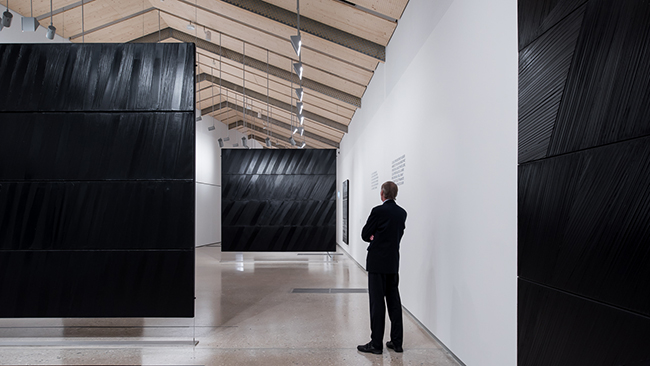 Soulages, a prominent figure of abstract painting, explores the properties of the color black. Since 1979, his work has aimed to capture not merely the value of black in itself but the light that it reveals and structures through the range of nuances and aspects of the pictorial matter. By venturing into Outrenoir, which is to say beyond the black, the artist seeks to treat light as a material. Yet his approach, based on his long-term practice of painting and his incessant questioning of its means, in many ways ressembles the scientific  understanding of the phenomenon of light.

The curatorial project here does not fall within the confines of a traditional exhibition in a conventional setting, but rather integrates the specificities of a new building on a university campus — creating the conditions for an innovative convergence of art and science. Together with the FGA, five EPFL laboratories alongside startups originating from the school put their research and technologies at the service of an original approach to the Outrenoirs.

The scenographic and scientific features of this exhibition suggest new directions in the understanding, presentation and conservation of these works.

The pilot exhibition Noir, c’est noir? does not limit itself to the tautological allure of its title. It hunts down and overcomes misleading evidence by joining the insights of art with the enlightenment of science.

→ Video about the exhibition

EPFL laboratories experiences in connection with the exhibition