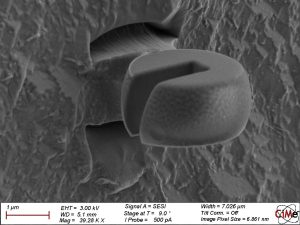 In this project we aim at addressing the mechanical properties of oxide inclusions within an iron based matrix, as well as the inclusion-matrix interface characteristics. Oxide inclusions are present in the steel as a direct consequence of the steelmaking process and it is well known that their presence and characteristics can exert a large influence on the performance of steel components. Some guidelines on what features render inclusions more or less suitable for a certain steel application are known; for example, it is known that the most harmful inclusions are large (whether single or clustered) and hard inclusions, but not enough information is available regarding the local mechanical properties of different types of inclusions nor about the characteristics of metal-oxide interfaces in steel.

The elastic modulus, hardness and strength of oxides generated within an iron melt in small samples produced in our laboratory will be addressed using nanoindentation techniques as well as testing procedures developed at LMM during previous projects. These include in-situ testing of the strength of inclusions within an SEM chamber. For this purpose, micromechanical test samples will be fabricated using a focused ion beam with a special “C-shape” design, which avoids the introduction of artifacts such as Ga+ implantation in the region of the sample that experiences the largest tensile stresses during the test. Systems of interest and to be analyzed include oxides of Al, Si and Mn, as these are the most commonly used elements during steel deoxidation practice, and also the influence of other elements such as Ca, Mg, Ti, V, which are also present during the steelmaking practice of many commercial grades.

A thorough study of the mechanical behaviour and the structure of oxide inclusions in steels would help not only to gain understanding on the influence that these discontinuities have on the properties of steel but will also contribute to provide more reliable data to a better prediction of the consequences of these particles in the performance of steel components. Furthermore, the identification of the structure of inclusions, its relation to process conditions and to the consequent mechanical performance of the alloy may allow the identification of pathways to improve the performance of steel.