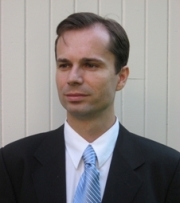 Jiri Vanicek’s research focuses on theoretical molecular quantum dynamics and bioinformatics. In the first area, his interests include the development of efficient exact quantum, semiclassical, and mixed quantum-classical methods for nonadiabatic molecular dynamics induced by the interaction with ultrashort laser pulses, and combining them with an on-the-fly evaluation of the electronic structure. In the latter area, his main interest is predicting the role of small noncoding RNA molecules in the development and desease. In 2013, Jiri Vanicek received the OpenEye Outstanding Junior Faculty Award of the Division of Computers in Chemistry of the American Chemical Society, and in 2015, the Consolidator Grant from the European Research Council.

Jiri Vanicek was born in Prague, Czech Republic. He earned his bachelor’s degree in physics, summa cum laude, at Harvard in 1997, and his doctorate in theoretical physics, under the supervision of Eric J. Heller, also at Harvard, in 2003.  After spending one semester at the Mathematical Sciences Research Institute in Berkeley, he took a postdoctoral position in theoretical chemical physics with William H. Miller at the University of California in Berkeley. From 2005 to 2007, he was a fellow at the Institute for Advanced Study in Princeton. In 2007, Jiri Vanicek joined the faculty of the Department of Chemistry and Chemical Engineering at EPFL and was promoted to associate professor in 2014.

PH.D. AND POSTDOCTORAL POSITIONS in theoretical chemical physics and bioinformatics are available in our group.