Movie: Nonadiabatic quantum dynamics of a 3-state, 4-dimensional model of pyrazine induced by a sequence of ultrashort pump and probe laser pulses

The CDR can be formalized using the inverse Weierstrass transformation, providing optimal choices of the sampling weight and width of Gaussian cells (Zambrano et al 2013). Additionally, the accuracy of this approximation can be improved with an amplitude correction derived from the phase-space propagator (Zambrano et al 2013).

On the other hand, starting from an exact Gaussian basis method, it is possible to derive the DR together with ten other methods for computing time-resolved spectra with intermediate accuracy and efficiency. These methods include the Gaussian DR, an exact generalization of the DR, in which trajectories are replaced by communicating frozen Gaussian basis functions evolving classically with an average Hamiltonian (Sulc et. al 2013).

Recent advances in computer capabilities have made it possible to combine accurate quantum dynamics methods with “on-the-fly” computed ab initio electronic structure. In our group we are interested in developing on-the-fly ab initio semiclassical dynamics methods (Zimmermann and Vanicek 2012,33), particularly for applications in ultrafast spectroscopy. The figure below shows an on-the-fly ab initio time-resolved stimulated emission of azulene [33]:

The figures below compare photodissociation spectra of CO2 computed by using two slightly different potential energy surfaces. In the first case (left figure), where the dissociation energy of the CO bond is perturbed by 0.02 eV, the spectra are very similar. In the second case (right figure), where the CO bond length is perturbed by 0.02 a.u., they are quite different. The contribution of our method described in Refs. [15,18] is that we can predict the accuracy/inaccuracy of the approximate spectrum very efficiently, without having to compute the more accurate spectrum. 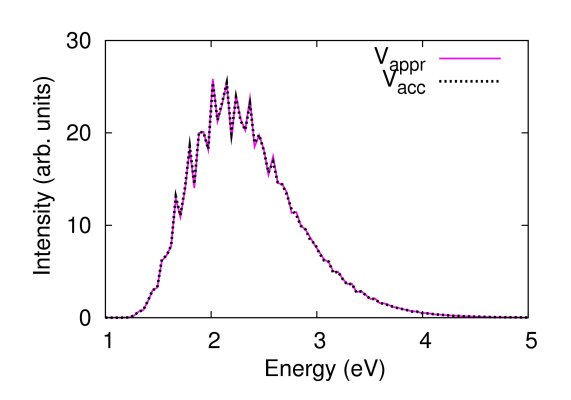 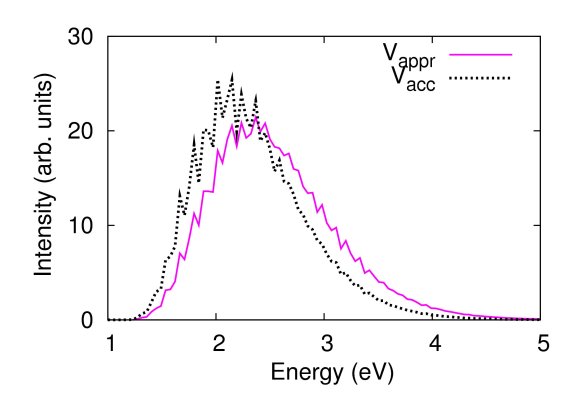