Skip to content
Live measurements (currently under maintenance)
(verify the authenticity and integrity of data you download using the below link with our PGP public key here)
Open record of all past measurements
See the Solar Eclipse of 2015 , as seen by our measurement system.
Real-Time State Estimation of the EPFL-Campus Medium-Voltage Grid by Using PMUs (The Sixth Conference on Innovative Smart Grid Technologies (ISGT2015)) 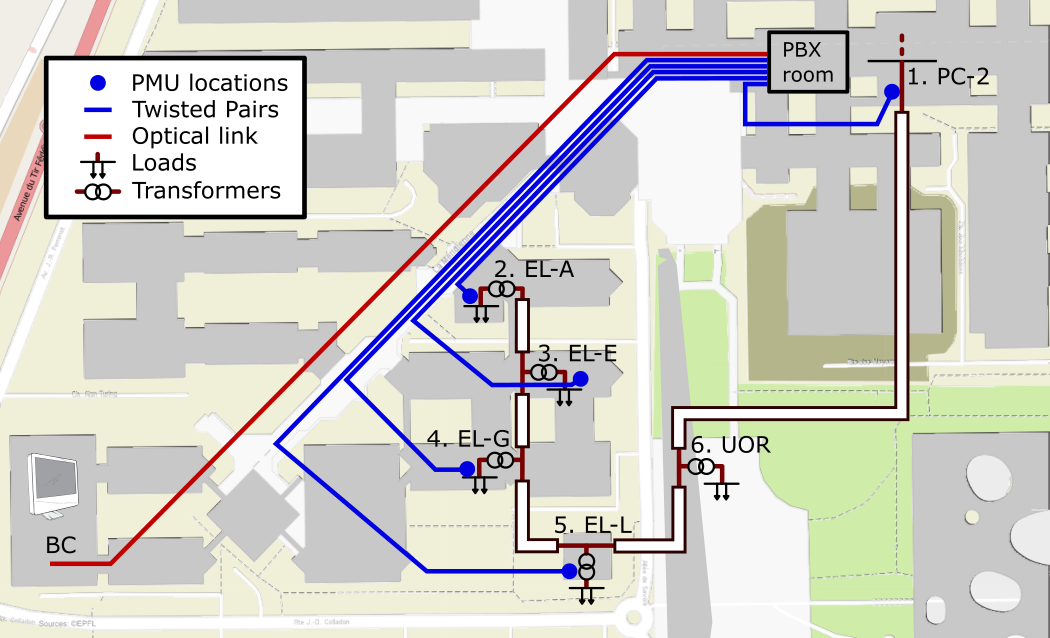 Map of the EPFL campus with the locations of monitored medium-voltage transformers and communication infrastructure.

The EPFL electrical network is a particularly challenging distribution network where all the peculiarities of active distribution networks (ADNs) are stressed. The lines are short and the load demand is largely variable in function of the hour of the day and the weather conditions. Moreover, active power injections are present as 2MW of photovoltaic panels are installed together with 6MW of combined heat and power generation units. These conditions, and the large use of power electronics, heavily affect the voltage and current profiles which makes the EPFL campus a challenging test bed for the developed infrastructure. We can see the map of the campus on the Figure above with the feeder that is equipped with PMUs and for which the state estimation is performed. In the near future we will expand our smart grid infrastructure by instrumenting additional feeders.

The monitoring process starts with the sensors that are connected to the medium-voltage side of the transformers. Voltage and current scaled waveforms are then fed to the Phasor Measurement Units (PMUs) in order to estimate the synchrophasors. PMUs encapsulate UDP datagrams according to IEEE C37.118.2-2011 standard. Datagrams are transmitted over a secured and dedicated communication network. A dedicated low-latency Phasor Data Concentrator (PDC) has been developed. It takes care of decapsulation, time-alignment and the replacement of missing measurements in order to feed the real-time state estimator (SE) with a consistent and complete set of data. The SE is based on Kalman filtering technique and it is developed in LabVIEW.

The main building blocks of our architecture are:

Phasor measurement unit (PMU) technology is widely considered as the most advanced metering infrastructure for power systems, because it allows for synchronized and fast measurements of frequency, amplitude and phase of the power-system waveforms. In order to allow for the use of this technology in ADNs, PMUs need to satisfy severe requirements in terms of phase accuracy, harmonic rejection and performances during power system dynamics [PMU1]. In this respect we have adopted a PMU prototype developed at DESL capable of satisfying every requirement defined in the standard for class-P PMUs. In [PMU2] the synchrophasor estimation algorithm is presented, together with its deployment in a National Instruments CompactRIO 9068, composed by a reconfigurable Artix-7 FPGA and a dual-core ARM Cortex-A9 processor and equipped with a customized Linux-RT OS.

In order to interface the PMU analog input modules with the power-system waveforms (i.e., 3-phase nodal voltages and nodal injected currents), the high-voltage/current signals need to be transformed to low voltage signals with the minimum amplitude/phase distortion possible. In this respect, an improved version of the Altea CVS-24 [PMU3] was selected. These sensors are 0.1-class compliant (Figure below shows a sensor installation). 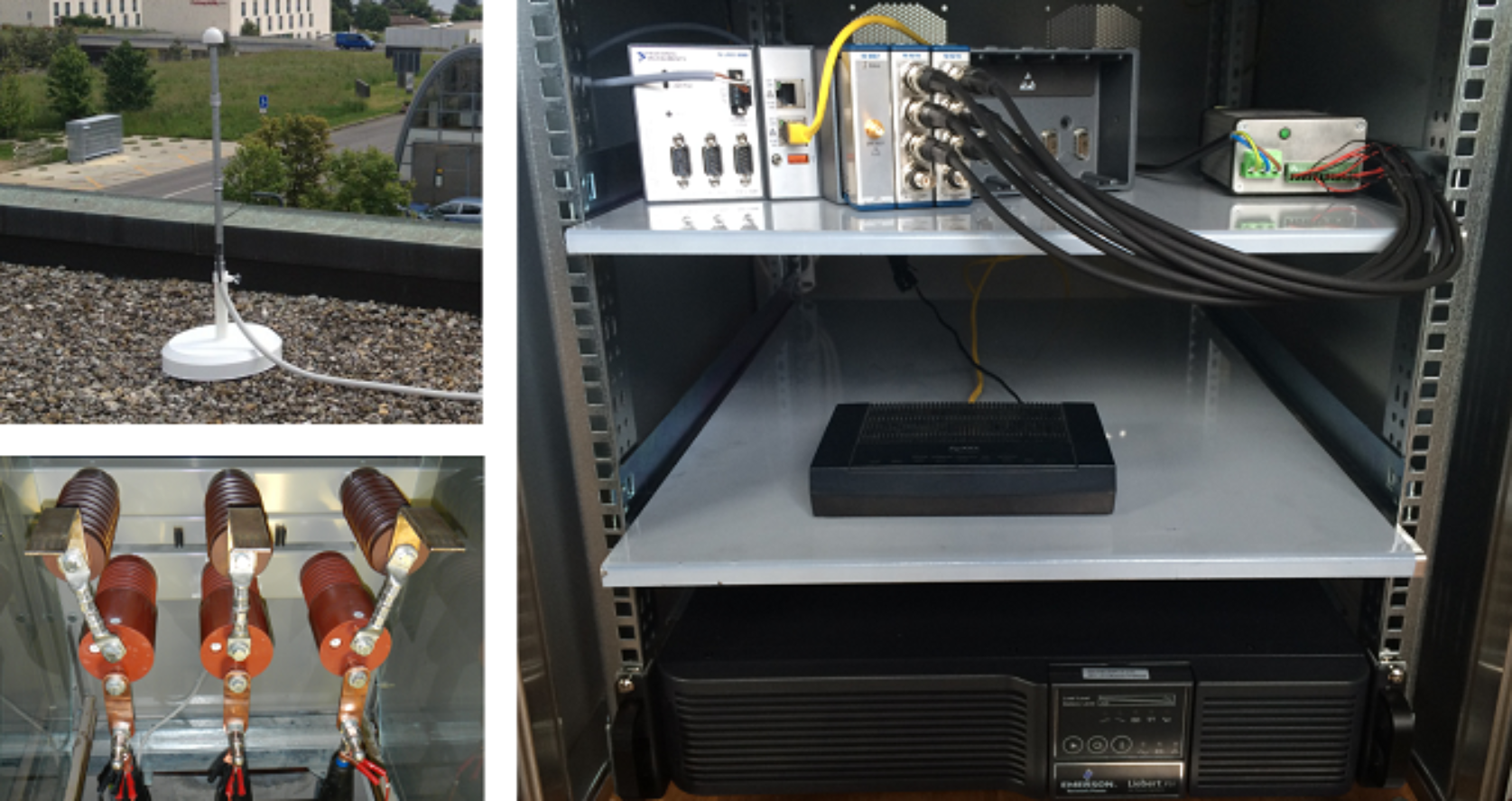 We built a dedicated communication network for security and robustness (the campus intranet is not secured in case of power outages). We use IPv6 rather than IPv4 in order to prevent future transition issues. We avoided expensive cabling deployments by re-using existing twisted pair cables, originally installed for telephony. These cables are passive and are star-wired from a central point,
the “PBX room”, where backup power is available. Communication over twisted pair cables uses the single-pair high-speed digital subscriber line (SHDSL) technology, as these cables are too long for Ethernet. Traffic from all PMUs is concentrated at the SHDSL concentrators (called DSLAMs) located in the PBX room. This would also be the natural place to locate the PDC and SE machines; however, we have only very restricted access to it. Thus, we had to place the PDC and SE machines in a more convenient location; for communications from the PBX room to PDC, we had to use more expensive optical fibers at 100 Mb/s, as the bitrate of SHDSL (2 Mb/s) is not sufficient here. The whole network is resilient to up to 8 hours of power outage; it is traffic-engineered to ensure enough capacity for the generated traffic.

The entire communication network is duplicated. We developed an IP version of the parallel redundancy protocol, called IPRP [COM1]; it takes care of duplicating UDP packets (at PMUs) and removing duplicates (at the PDC). This provides 0-ms repair of packet losses. We implemented IPRP as a transport layer solution in the Linux operating systems of the PMUs and PDC; this has the benefit of not requiring any changes to any PMU/PDC applications or to any network devices.

The phasor-data concentrator (PDC) collects synchrophasor data and other quantities (i.e., frequency, rate-of-change-of-frequency, nodal injected/absorbed powers, etc.) estimated by the PMUs and transmits the information to other applications such as visualization tools or state estimator. The PDC deployed on the EPFL campus was fully developed by the Authors in LabVIEW and it is hosted, together with the state estimation, on a dedicated workstation. The synchrophasors are aggregated and time-aligned in a circular buffer, according to their timestamps. A subset of these measurements is then pushed to the state estimator with minimum time latency. Since the PMUs streams the data at 50 fps, an adaptive algorithm was developed in order to ensure that the available measurements are forwarded within 20ms, thus increasing the determinism of the process.

Finally, we note that the machine hosting the PDC and SE is GPS synchronized, hence we are able to identify and solve eventual bottlenecks in the whole chain that might result in an increased total latency.

The state estimator receives the data from the PDC and estimates the system state, defined in rectangular coordinates as the 3-phase real and imaginary parts of the voltage phasors at each network bus. We implemented the SE method called discrete Kalman filter (DKF) [SE1]. In [SE2] the adopted DKF-SE algorithm is described and an off-line assessment of its accuracy performances is performed.

This DKF-SE is suitable for 3-phase systems and relies only on nodal voltage and injected current synchrophasor measurements provided by PMUs.

Furthermore, every set of measurements received by the PDC is analyzed in order to find and replace eventual corrupted data. The algorithm that describes this pre-estimation filtering process of bad data is available in [SE3]. 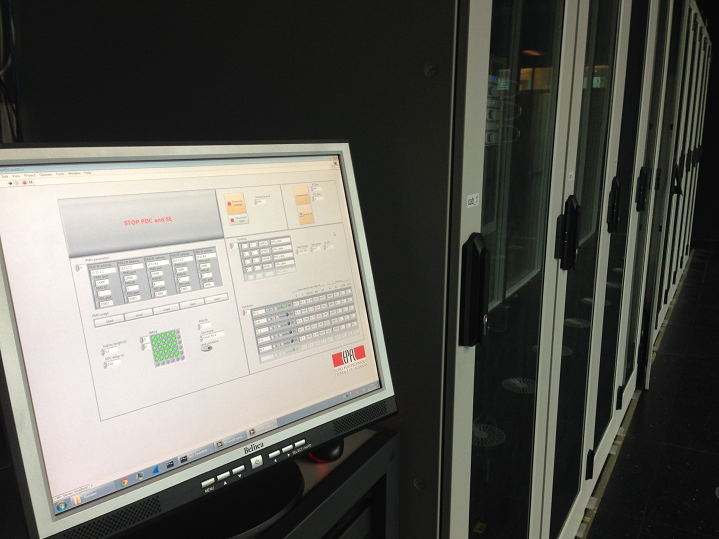 The state estimator located in the server room of the BC building of our campus.

Since April 2013, the project has been funded by
the Swiss Nano-Tera SmartGrid initiative.