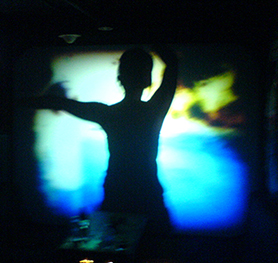 EPI Redux is re-imagining of the psychedelic classic The Exploding Plastic Inevitable, created by Andy Warhol with the Velvet Underground in the late 1960s. Rather than literally interpreting the original Warhol event, EPI Redux seeks to update psychedelia for the new millennium. Using an excess of technology the project immerses viewers in an overload of the senses and in a Gesamtkunstwerk where sound, vision, space and time coincide.

EPI Redux utilizes multiple projectors, a barrage of laptop computers, custom software, live vocals, keyboards and live video processing to create an immersive audio-visual experience which mimics the psychedelic atmosphere of the original EPI event, while at the same time updating the audio-visual language to the 21st Century.

The piece will be performed by two performers, experts in their mediums:

Prof. Stefan Müller Arisona: Computer scientist, software engineer and new media artist, he operates at the intersections of art, science and technology.  He is a professor of computer science at the Institute of 4D Technologies at FHNW and senior research fellow at ETH Zurich’s Future Cities Laboratory. His work focusses on the creation of tools and techniques that apply principles from computer graphics, digital media, and human-computer interaction to a variety of fields such as digital art and entertainment or architectural and urban modelling.

Prof. Dr Simon Schubiger is teaching computer graphics at the University of Applied Sciences Northwestern Switzerland and was the former head of software development at Esri R&D center in Zurich, Switzerland. He is co-founder of the ETH spin-off company Procedural Inc, acquired in 2011 by Esri Inc. Previously, he was lecturing mobile system architectures at ETH Zurich, worked for Swisscom Innovations, and an associate researcher of the Pervasive and Artificial Intelligence group at the University of Fribourg. He is a co-developer of the procedural 3D modeling software CityEngine, Soundium2 multi-media platform and the NOVA software. Simon Schubiger-Banz received a Ph. D. in computer science from the University of Fribourg, Switzerland. He is a member of the ACM and President of the Corebounce Association.

Marcel Andreas Reimer is a Swiss-Canadian visual artist, musician and computer scientist who currently lives and practices in Zürich, Switzerland. He earned a combined degree in Computer Science and Visual Arts from the University of Victoria, Canada with a focus in sculpture installation and interactive media arts. Currently Reimer is heavily involved in his own electronic music production as well as live VJ performances for renowned musicians such as Henrik Schwarz, Franco Bianco, Animal Trainer, Sasha Braemer and Derrick May. He also founded the GIBSMIR Family Art Collective, where he organizes art auctions and multimedia events.