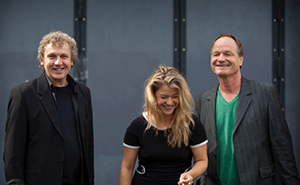 It is with original and unpredictable interpretations of the jazz standards of the 1940s and 1950s that singer and pianist Myria Poffet (Chantemoiselle), band leader of the Poffet Trio, along with her two longstanding accomplices Michel Poffet and David Elias, will charm us.

Myria Poffet followed a piano formation in classical and jazz music as well as a singing formation at the Hochschule der Künste of Bern. Besides her work with the Poffet Trio, she cooperates with several Swiss and European bands. Michel Poffet, the bassist, is one of the most polyvalent musician in Switzerland, between jazz music, blues, rock and pop. Drummer David Elias, from the Swiss Jazz School, is one of the master of groove music in  Switzerland. He played at the festivals of Montreux, Detroit, Burghausen and Lugano.

On Tuesday 8 May at EPFL, the Poffet Trio will be accompanied by trumpet player Daniel Woodtli.Trained at the jazz department of the Hochschule der Künste of Bern, Daniel Woodtli since began a magnificent career as solist, sideman, studio musician, composer and arrangeur. He is member of the mythical band Patent Ochsner from Bern, and of the Swiss Jazz Orchestra of which he is one of the founder. He is also leader of the Jütz Trio, known for its work around modern folklore. Daniel Woodtli teaches at the Music Conservatory of Bern and takes part in projects of contemporary music and as musical partner to literary performances.