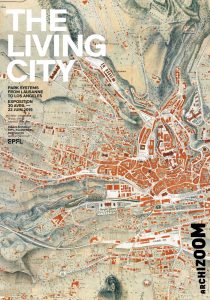 A New Look at Civic Design

Before the industrial agenda of urban design, broadly promoting technology and economy, there was the social agenda of civic design, creating ecology and community.

This exhibition presents a chronological overview of the evolution of civic design as evidenced in the work that was central to it: the creation of regional park systems. Over a period of three centuries – from 1770 to 2070 – the exhibition presents a sequence of projects, from Wolfgang von Goethe’s Park an der Ilm in Weimar (1778), to Paxton’s People’s Park in Liverpool (1857), to the Olmsted Brother’s Regional Park System for Los Angeles (1928).

Correlating and comparing historic park system projects in Lausanne and Los Angeles, and highlighting ongoing community-based projects in these two cities, the exhibition also features two major discoveries: a previously unknown park system Frank Lloyd Wright designed for his own community in Spring Green, Wisconsin (1942) – the closest thing we have to a built version of his ‘broadacre’ plans for ‘The Living City’ (1934-58) – and Frank Lloyd Wright Jr.’s previously unpublished multi-modal park system for Los Angeles County (1962).

The projects featured in the exhibition demonstrate the historic effectiveness of park systems, shed light on challenges faced by communities implementing contemporary park systems, and encourage the re-evaluation of the intergenerational discipline of civic design.