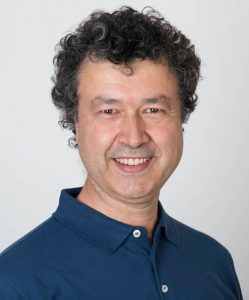 Jean-Philippe Thiran was born in Namur, Belgium, in August 1970. He received the Electrical Engineering degree and the PhD degree from the Université catholique de Louvain (UCL), Louvain-la-Neuve, Belgium, in 1993 and 1997, respectively. His PhD thesis was supervised by Prof. Benoît Macq

Dr Jean-Philippe Thiran joined the Signal Processing Institute (ITS) of the Swiss Federal Institute of Technology (EPFL), Lausanne, Switzerland, in February 1998 as a senior lecturer. From 2004 to 2011 he was an Assistant Professor (tenure track), responsible for the image analysis group (LTS5). In a few years he has built a research team of some 20 researchers, both PhD students and post-docs, active in various areas of signal, image and multimodal data analysis. In March 2011 Dr Thiran has been promoted to Associate Professor and since June 2020 he is a Full Professor. He also holds a 20% associate professor position with the Department of Radiology of the University Hospital Center and University of Lausanne (CHUV-UNIL).

The scientific interests of Prof. Thiran include: