Congratulations to the team for making the back cover page of Advanced Materials with Volumetric bioprinting (VBP). 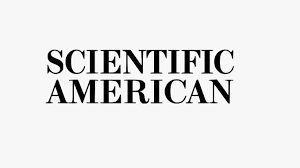 Research on volumetric bioprinting highlighted by Scientific American:
This printer is probably unlike any you’ve seen. It makes biomaterials from a vat of spinning hydrogel, a goopy mass of water and long-chain polymers. Laser light projects an image on the gel, hardening light-sensitive polymers into the shape of an artificial organ. And the gel is saturated with stem cells to help seed actual cell growth. The spinning creates weaved strands in the growing organ, adding more strength.
Researchers from Switzerland and the Netherlands have used this printer to create synthetic bone and cartilage. They hope their device might one day rapidly generate tissue in real time for many clinical purposes, from drug trials to open-heart surgery.
!

LAPD is on EPFL News!

World first 3D bioprinting demonstration of complex centimeter scale tissue construct made in SECONDS! Congratulations to Paul Delrot, Damien Loterie from the EPFL/LAPD and the team at the University of Utrecht for this impressive demonstration. 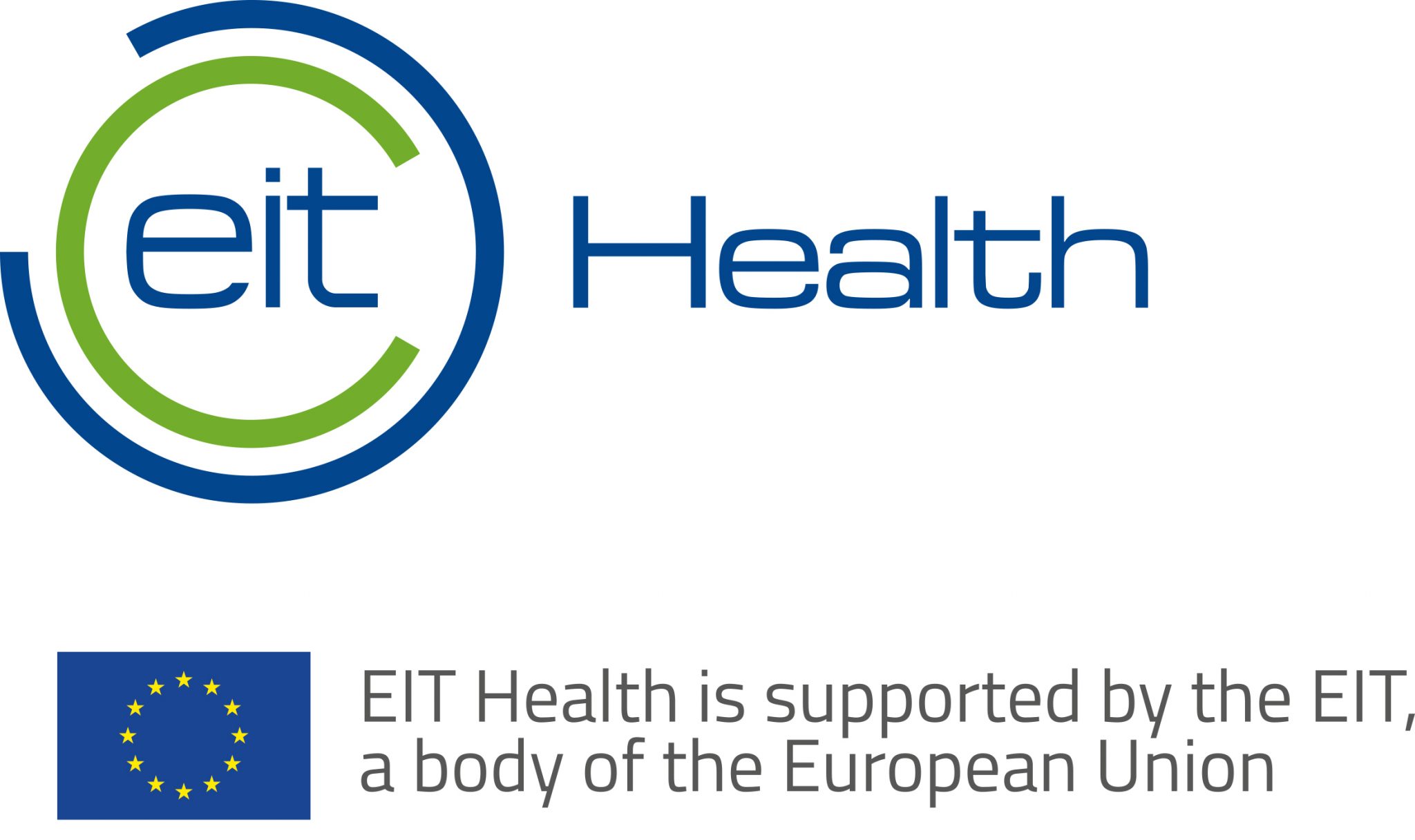 EarlySight, the LAPD spin off won the EIT Health Headstart 2019 grant! EarlySight is one of the 6 awarded companies after pitching at the SHIP event in Heidelberg.

Prof. Christophe Moser is part of the organization for the conference: Advances in Optics for Biotechnology, Medicine and Surgery XVI. Download the preliminary program here.

Congratulations to Babak Rahmani for succeeding in his candidacy exam!

Congratulations to Chiara Bonati for winning the student presentation competition during the Photonics Day. Thanks to Dr. Damien Loterie for his very interesting talk about volumetric 3D printing. Here are some pictures from the event, courtesy of Dr. Andreas Tittl from BIOS Lab.

LAPD is on EPFL News!

As the EU-General Data Protection Regulation (EU-GDPR) came into effect on 25 May 2018, we have updated our website. For more information, please visit the following page : https://mediacom.epfl.ch/disclaimer

Congratulations to Georgia Konstantinou for succeeding in her candidacy exam! 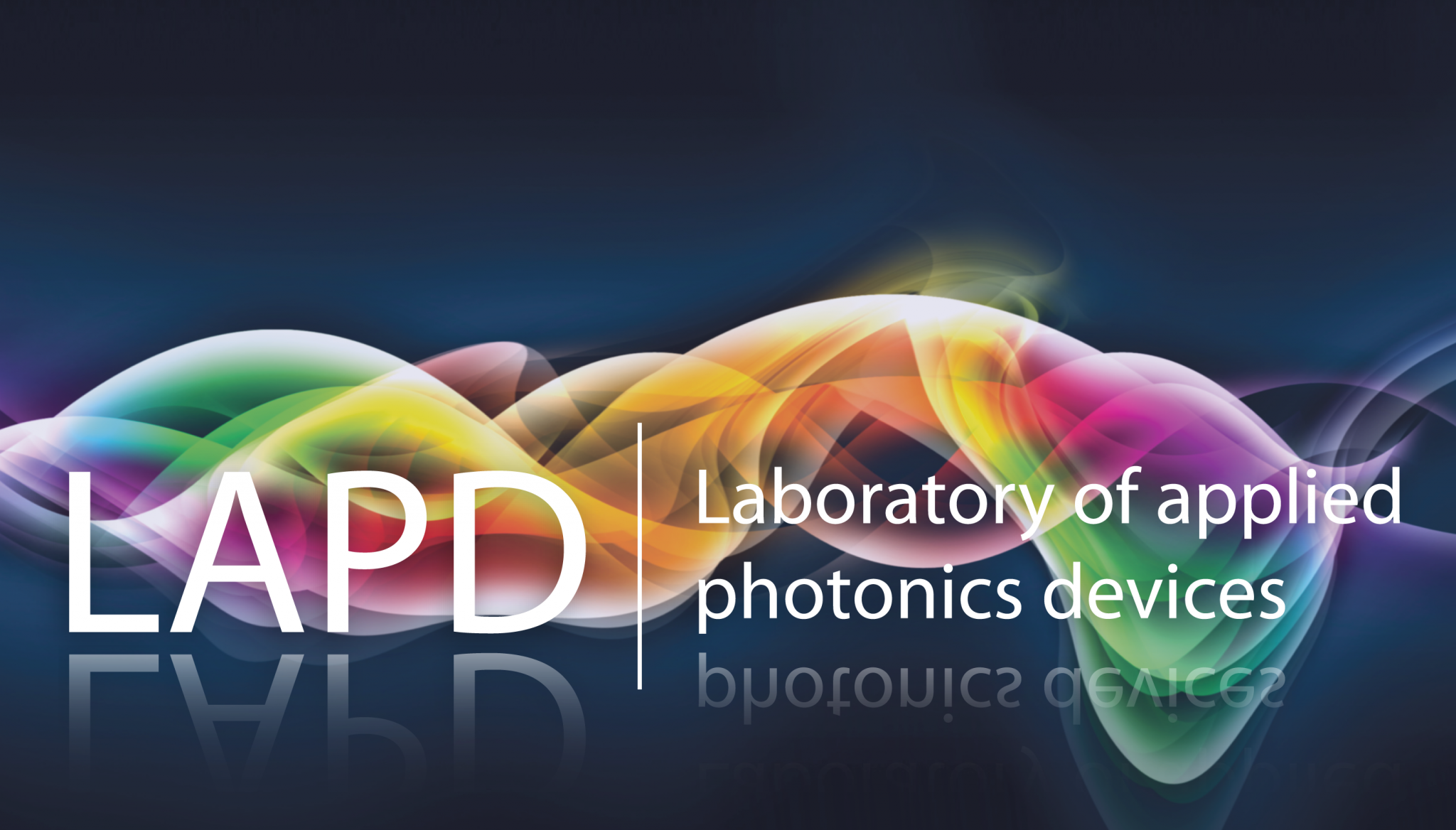 Congratulations to the INTEL team for the incredible integration work shown in the video release of the Smart glasses project “VAUNT”. 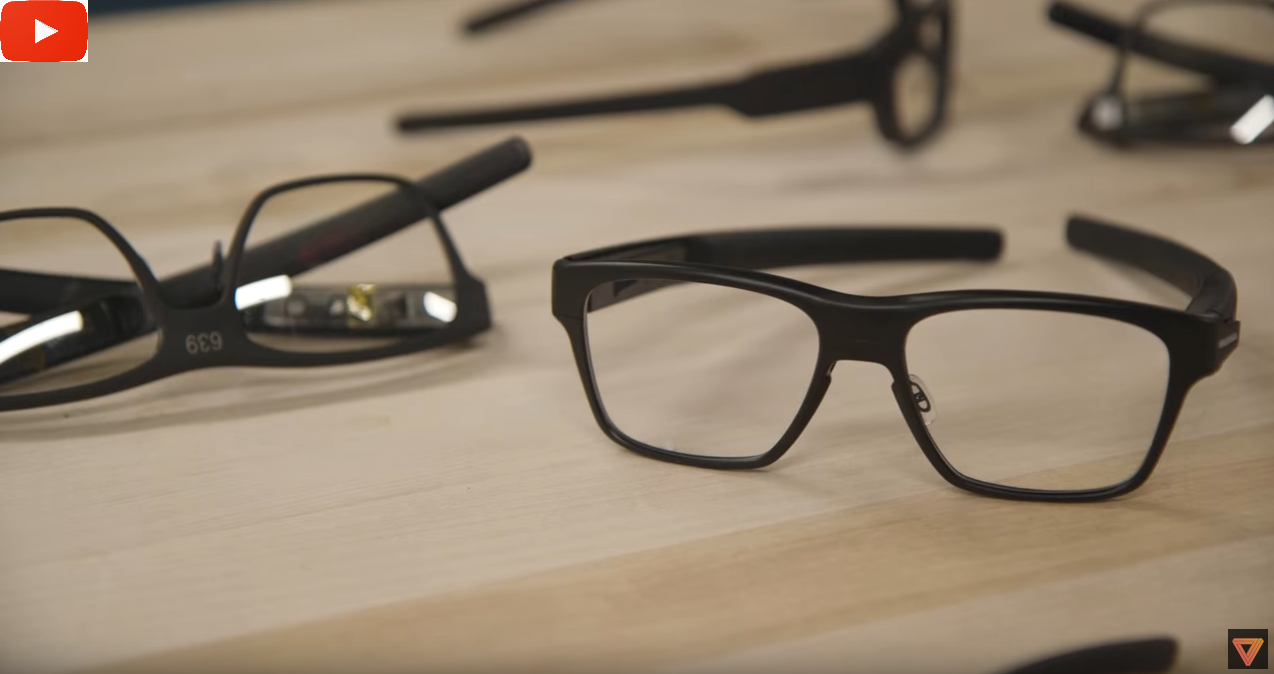 This result was an adventure which started in 2011 in the Laboratory. Early prototypes in 2012 showed potential for a pair of smart glasses which could look like regular glasses. 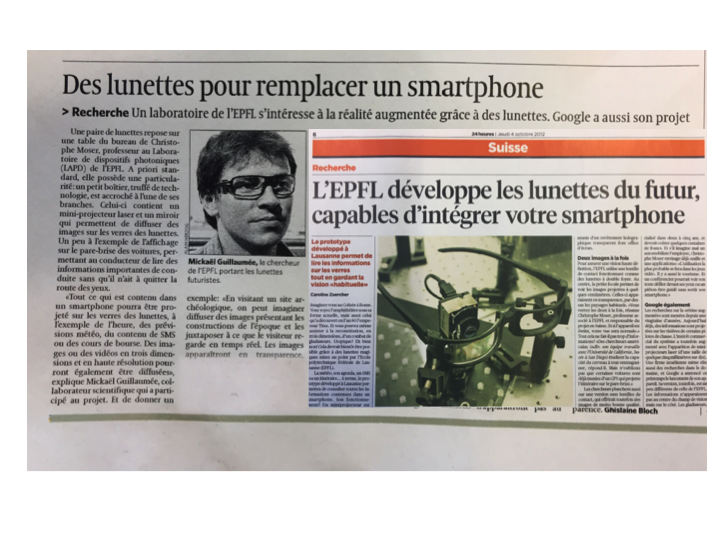 A redesign of the smart glasses led to an even more sleek design and which led to the creation of the spin off Composyt Light Labs founded by two postdocs in the lab, Mickael Guillaumée, Eric Tremblay, Microtechnique engineer David Ziegler and Prof. Christophe Moser.
Composyt Light Lab was acquired by INTEL in December 2014. 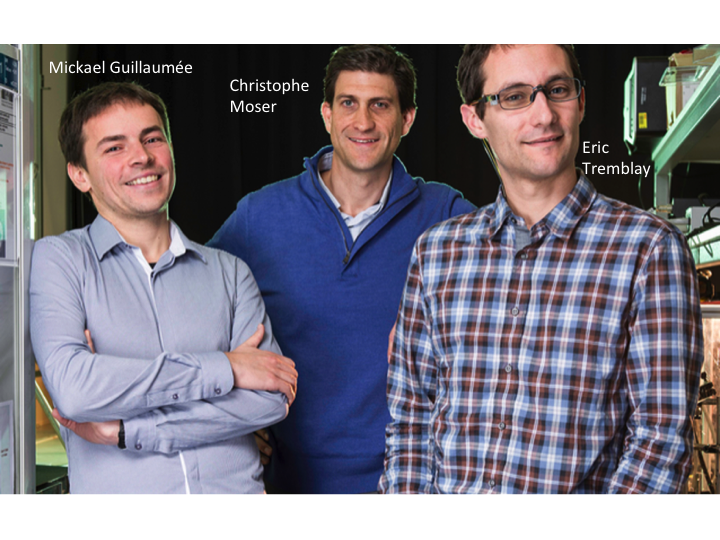 Other related news here and here

LAPD is in the news!

Congratulations to Paul Delrot for his paper on Single-photon three-dimensional microfabrication through a multimode optical fiber which has been selected as editor’s pick in Optics Express.

Have a look at  Europe’s age of Light to know how photonics will power growth and innovation!

Don’t miss the joint workshop EPFL Photonics Chapter – Swissphotonics on “Photonics opportunities and companies in Switzerland”, October 12th during the next Forum EPFL.

Congratulations to Jan Krizek for succeeding in his candidacy exam! 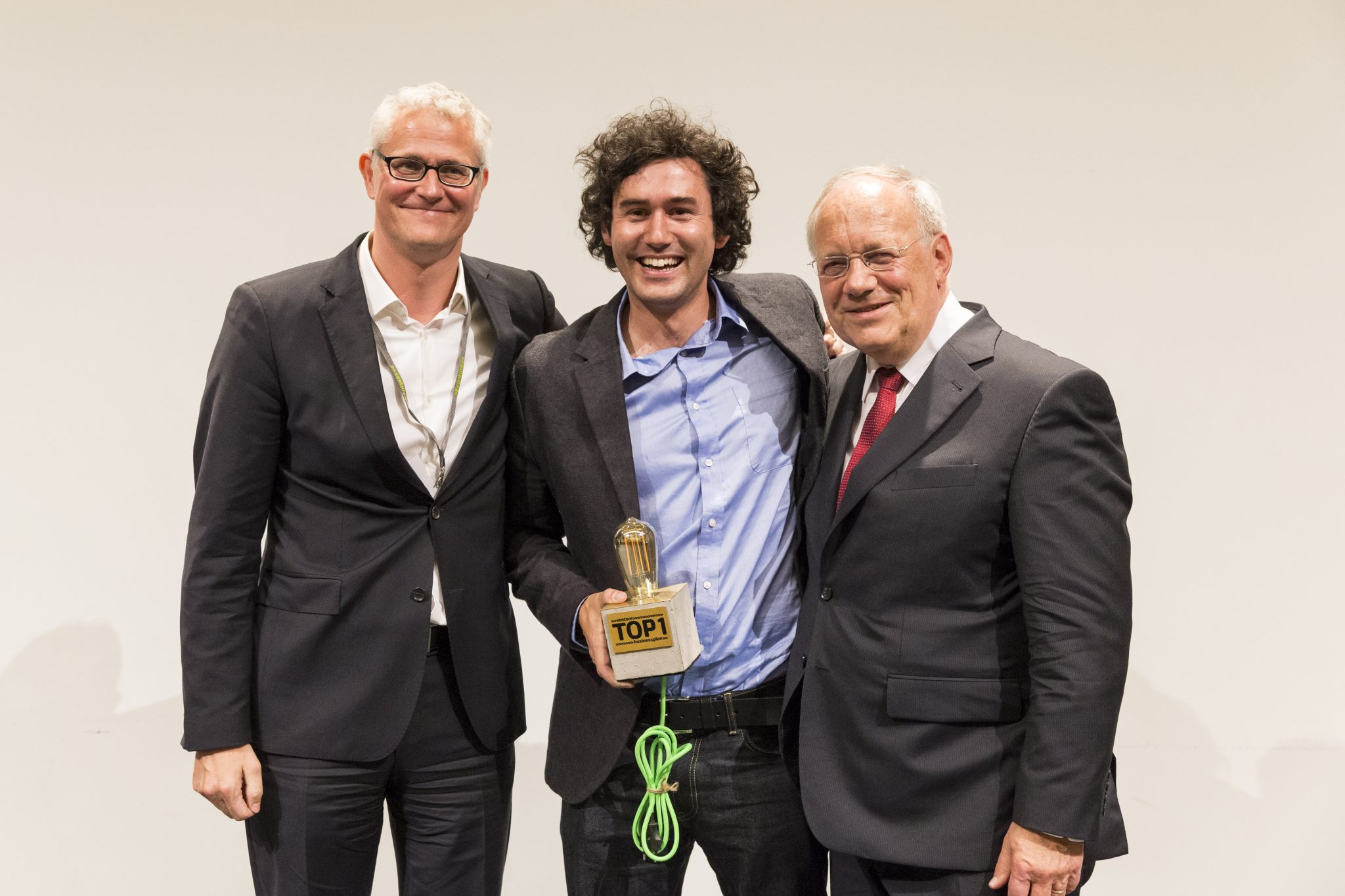 Congratulations to Andreas Schmocker who received first prize at the Venture Trophy !

Congratulations to Emilio Morales Delgado for winning the Best Picture of the Month from Center of Micronanotechnology at EPFL!

An article on Innogrant startup Insolight hosted by LAPD on the BBC!

Don’t miss the joint workshop EPFL Photonics Chapter – Swissphotonics on “Photonics opportunities and companies in Switzerland”, October 13th during the next Forum EPFL.

Come and celebrate with us the 100th anniversary of the Optical Society of America! This networking event will gather optics enthusiasts from academia and industry, including 10 OSA fellows on October 5th at EPFL.

An article on Innogrant startup Insolight hosted by LAPD in the news!

LAPD research on the national radio !

An LAPD paper in the news!

Congratulations to Paul Delrot for his paper which has been selected as editor’s suggestion in Physical Review Applied.

Congratulations to Andreas Schmocker for winning the 2016 Research Award of the Swiss Society for Biomaterials + Regenerative Medecine!

Congratulations to Enrico Chinello for succeeding in his candidacy exam!

LAPD’s paper Two-photon imaging through a multimode fiber is on Top Downloads of Optics express!

Congratulations to Paul Delrot for succeeding in his candidacy exam!

An LAPD patent in the news!

Congratulations to Mathieu Kunzi, the first recipient of the Swiss Photonics excellence fellowship for master studies in photonics.

Don’t miss the joint workshop EPFL Photonics Chapter – Swissphotonics on “Photonics opportunities and companies in Switzerland”, October 8th during the next Forum EPFL.

Congratulations to Miguel A. Modestino for winning the 2015 Energy & Environmental Science Readers’ Choice Lectureship, at the International Symposium on Energy Conversion and Storage in Beijing, China.

Congratulations to Andreas Schmocker for winning the IFMBE Student Competition on Medical Device Design at the IUMPESM World Congress on Medical Physics and Biomedical Engineering in Toronto, Canada.

Congratulations to Manon Rostykus for succeeding in her candidacy exam!

The next Photorefractive Conference PR’15 will be organized by Ecole Polytechnique Fédérale de Lausanne (EPFL) and will take place in Villars, Switzerland, from 16-19 June 2015.

A spin-off of LAPD acquired by Intel.

Congratulations to Volker Zagolla for winning the 2014 Light, Energy and the Environment Congress Best Student Presentation Award from the OSA!

Congratulations to Volker for successfully defending his thesis entitled “Self-tracking solar concentration” on November 19th 2014. Volker did some experimental magic to show for the first time a working solar concentrator capable of following the sun without any external tracking. His work was deemed by the jury as being a landmark development in solar concentration. I was fortunate to have two great students in Zahra and Volker who could work independently and contributed to set up the laboratory. I wish Volker all the Best for the future.

Congratulations to Zahra for successfully defending her thesis entitled “Broadband digital holographic camera for microscopy” on October 10th 2014. I am delighted that Zahra is my first PhD student graduating. It was wonderful interacting with her over the 4 years. Her work is seen by the jury as having an important impact to turn standard microscopes into quantitative phase microscopes. I wish her the best of luck in her new endeavours.

Congratulations to Dino for passing his candidacy exam this week on biomedical imaging with wearable smart eyewear (Bwise). I am sure he will not only be wise but also show out of the box ideas !

Congratulations to Dino Carpentras for winning the Best Poster price at the Photonics Day!

LAPD’s paper High-resolution, lensless endoscope based on digital sanning through a multimode optical fiber is on Top cited articles of Biomedical optics express!

Congratulations to Claudia Rodriguez and Miguel Modestino for their paper published in
Energy&Environmental Science.
The paper “Design and cost considerations for practical solar hydrogen generator” presents a generalized approach to understand the economic factors behind the design of solar-hydrogen generators composed of photovoltaic components integrated with water electrolyzers. A key finding of the the analysis is that, when the system is optimally designed, the cost of hydrogen is defined primarily by the photovoltaic panel  (up to 97% of the cost) while the material selection for the electrolysis components (such as catalyst) has minor effects.

The laboratory would like to thank Claudia for the techno-economic contribution in this work during her one year mandate as a research collaborator.

This year we have the great honor to host the conference “Photorefractive”, in Villars, from the 16. to the 19. of June 2015.

The meaning of the term “photorefractive” has broadened over the years. Analog holograms in materials can be recorded digitally using Megapixels detector, decoded with computers and reconstructed digitally with Megapixels spatial light modulators. We thus broaden the scope to include a “digital photonics” segment.

LAPD work on augmented reality display is in Le Temps!

LAPD work on augmented reality display is on TV!

Congratulations to Damien Loterie for successfully passing his candidacy exam !

The LAPD would like to congratulate Mathieu Gani for his technical lead on the Global Neonat project which has the ambitious goal of developing an infant incubator designed specifically for hospitals in developing countries. The feasability project was sponsored by CTI and brought a number of partners together: Hospitals CHUV in Lausanne and HUG in Geneva, 2 laboratories at EPFL (LAPD and LTC), University of Cameroon and Ardo an implementation partner producing and selling infant incubator as well as Essential Med, a non-profit organisation. Mathieu coordinated the efforts between these groups and developed a simulation model of an incubator.

LAPD work on augmented reality display is on the news!

Lyncée Tec SA develops, produces and sells Digital Holographic Microscopes (DHM). The technology is patented, and has been developed in close cooperation with the University of Lausanne and EPFL. Lyncée is the worldwide leader on the microscopy market with the digital holographic technology.

Volume Diffractive Optical Elements (VDOE) can solve an important drawback associated with the so called “off axis configuration” which presently limits the performance of DHM systems. Without a VDOE, the coherence plane is not perpendicular to the optical axis, but has a few degree tilt with which severely limits the field of view of the microscope.

Correction of this tilt by a VDOE would directly improve acquisition speed, range, resolution and accuracy. It also enables new analysis modules, for instance reflectometry for thin films characterization. In both cases, solutions to this issue would enlarge the competitiveness and the market size of DHM, and increase technological advance of Lyncée Tec.  It would also speed up the replacement of traditional and well implanted alternative techniques by DHM systems.

Preliminary work has been performed to demonstrate the principle of coherence tilt correction using VDOE, but technical issues still need to be addressed for implementation of this technique in the production of DHMs. It is the main objective of this project to solve these technical issues.

Additionally, coherence plane tilt correction by a suitable VDOE may also enable the use of short coherence light sources such as LEDs. If demonstrated, it opens the door for DHM modules to be mounted on traditional optical microscope in much the same way as the addition of a digital camera to a microscope. The scientific and technical evaluation of this opportunity is another objective of the project.

Congratulations to Zahra Monemhaghdoust and Volker Zagolla for successfully passing their candidacy exam !

Micromirror laser in “News Break” in the August 2011 Edition of Laser Focus World.

LAPD welcomes Rui Du, who just joined the group as a Postdoc. Rui received his PhD in biomedical engineering from Huazhong University of Science and Technology (HUST) . He has worked on scanning two-photon microscopy with temporally focused beams.

New publication on a frequency agile laser tuned by a digital micromirror array for applications in Interferometry and Terahertz sources.

LAPD welcomes Eric Tremblay, who just joined the group as a Postdoc. Eric received his PhD from UC San Diego. He has worked on compact imaging systems, planar solar concentrators during his thesis.

LAPD receives initial funding from U.S company Innovega for proof-of-concept development  of ultra-light spectacles on which special data will be projected using lasers with very low energy consumption.  A holographic element known as ‘transflective’ will be designed, which will enable the integration of a liquid crystal display near the zone of increased vision.It would then be possible to see through the spectacles, while simultaneously receiving complementary information  to the scene projected on the retina.