Lensless imaging refers to an imaging technique which requires no imaging element between the light transmitted by the sample and the camera. This configuration enables designing compact, cheap and high-resolution (sub-micrometer) over a large field of view (camera chip size) devices. In the visible range, it is mainly investigated for microscopy. Current implementations use illumination sources positioned above the sample several centimeters away making the lensless imager bulky in height. Here we demonstrate an implementation with the illumination sources side illuminating a prism. Moreover to increase the resolution the sources are usually mechanically shifted to provide subpixel shifts on the camera to retrieve a higher resolution image. Here we use the wavelength dependence of output angle of hologram gratings to achieve this goal. This results in a flat high-resolution phase lensless imager. 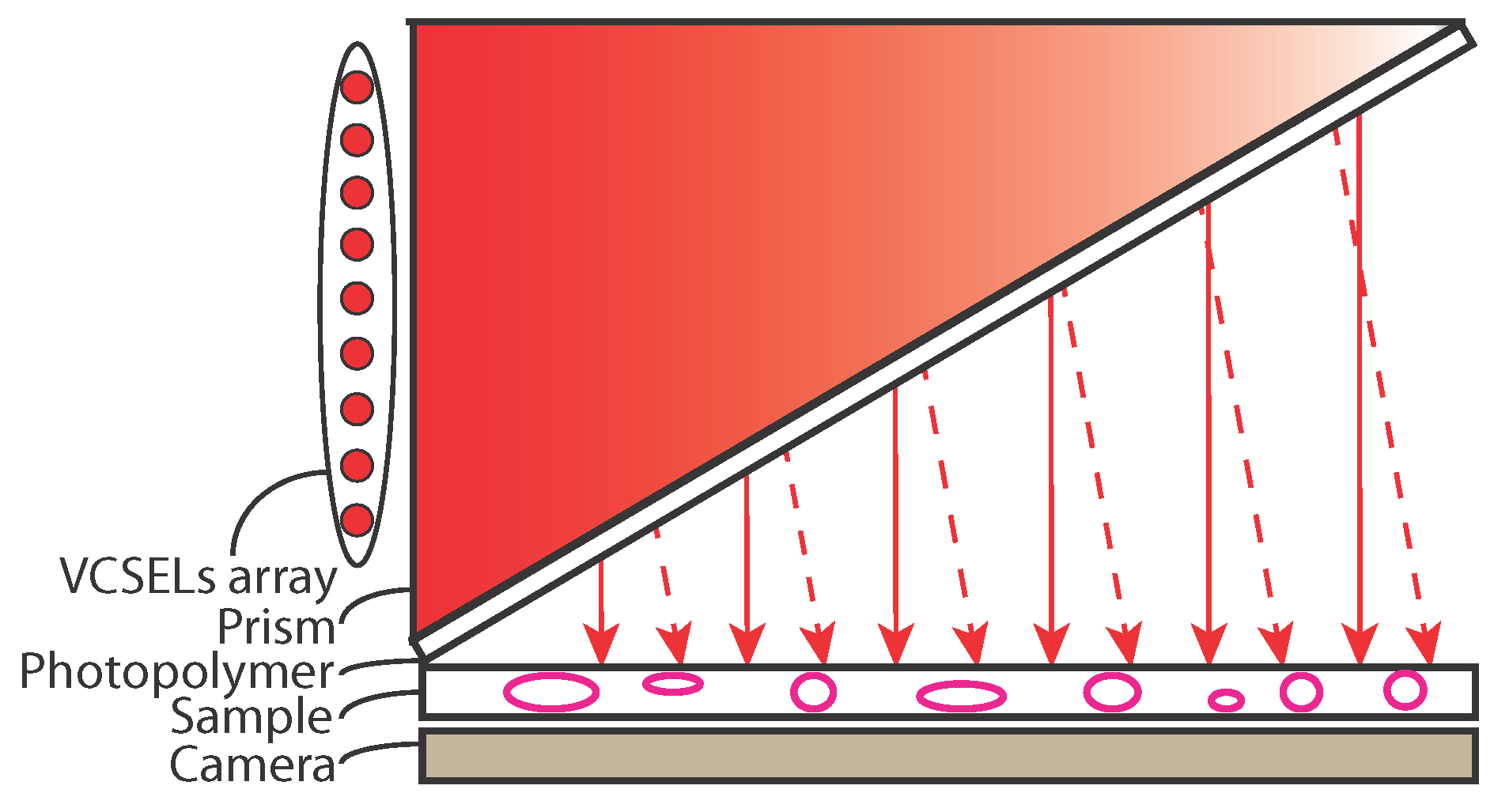 Compact lensless optical imaging systems are mainly applied in microscopy for biological samples. Indeed, they are well suited as imagers inside cell incubators because of their compact size (high throughput with many imagers per incubator) and sub-micron resolution over cm2. Several presented systems uses digital holography to recover phase and amplitude of a sample. To avoid speckle, most of the systems utilize incoherent light sources positioned many centimeters away from the sample and camera chip to record interferograms. Moreover, in order to increase the resolution of the result, the sources are shifted mechanically by a small amount to obtain subpixel shifted interferograms on the camera to retrieve a higher resolved interferograms.

Here, we demonstrate a compact illumination system for a high resolution lensless phase imager. The device is composed of a side illumination system that uses a prism onto which a photopolymer film is laminated on one side. An array of light sources is set along one side of the prism and several analog hologram gratings are recorded in the photopolymer film to redirect the light out of the prism with different specific beam angles. The sample can thus be illuminated with different directions and a camera placed behind the sample records the inline holograms. For each illumination direction, the wavelength of the sources is changed to obtain slightly different illumination direction of the sample and obtain several subpixel shifted digital inline holograms which are then processed in a pixel super resolution algorithm to retrieve a highly resolved hologram. The stack of highly resolved holograms is then processed in a reconstruction using Gerchberg-Saxton and tomographic type algorithm. The quantitative phase and amplitude of the samples are reconstructed with high resolution.
The side illumination system effectively folds one axis (z axis) which creates a flat lensless imaging system. 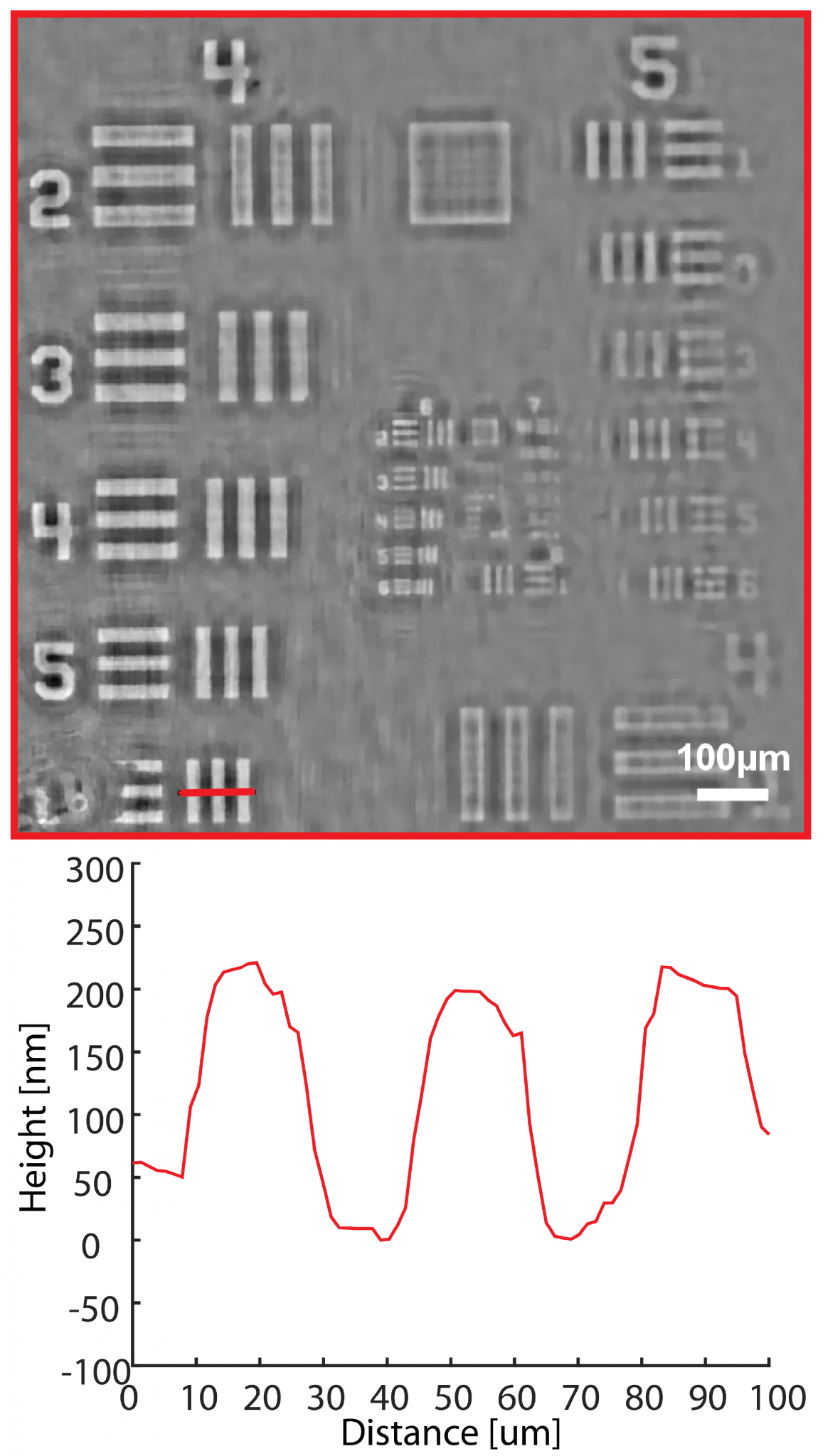 Digital holographic microscopy (DHM) is a quantitative optical imaging technique that is able to capture the complex wavefront (amplitude and phase) of the light interacting with a sample. Capturing the wavefront is performed by recording the spatial interference pattern of the beam that interacts with the sample (i.e. object beam) and a mutually coherent reference beam using a digital camera. With a highly coherent source, the interference can be easily obtained, with the drawback of reduced image quality due to parasitic interference and coherent noise. Parasitic interferences are significantly reduced by using short coherence light sources. On-axis digital holographic microscopy requires acquiring multiple interferograms which limits the ability to perform real-time imaging and adds complexity to the system. Conversely, off-axis interferometry provides an opportunity for dynamical quantitative phase measurement because only one digital hologram is sufficient to recover phase and amplitude. However, under broadband illumination and in order to be able to exploit the whole field of view of the camera in off-axis geometry, the coherence planes of the two beams must be parallel. We have shown that coherence plane manipulation on the reference beam allows for full field imaging in off-axis geometry.

Instead of generating interferograms using an isolated reference beam from object beam, through separate optical paths, the reference beam can be generated by illuminating the sample in the first place and applying low-pass filtering on the signal beam containing the sample information. A major advantage of this configuration is that such a system can be attached to the output of a conventional microscope (image plane) and generate interferograms of the sample from which the phase and amplitude information can be extracted. Traditionally spatial filtering is done using an optical pinhole. Pinhole spatial filter uses the principles of Fourier optics to alter the spatial structure of the beam. However, the requirement that the reference beam be passed through a pinhole, makes the alignment a non-trivial task, especially for a non-specialist in microscopy. If the beam illuminating the sample is angularly deviated, it misses the pinhole and no reference is generated hence not interferogram is obtained.

A filtering approach which is applied directly on the beam propagation angle would alleviate the problems related to pinhole alignment. Holographic spatial filtering, operates with an unfocused beam and relies on high angular selectivity of thick holographic gratings to remove spatial frequencies. Therefore, it can be used as a replacement for pinhole to produce a reference beam from a sample beam.

In this project a digital holographic camera system has been developed which can potentially be retrofitted to the camera port of any standard microscope to obtain off-axis holograms of the sample over the entire field of view, under low coherence illumination. The proposed system splits and merges the reference and object beams after the output of the microscope, while using spatial filtering to erase the information from one of the beams before it merges with the other beam. We employed holographic spatial filtering based on thick gratings which replaces conventional spatial filtering based on pinholes with the advantage of less sensitivity to the angular deviation resulting from misalignment in the incident beam on the sample. The phase image measurements on human cheek cells prove that it is possible to obtain results comparable to those obtained with a commercially available, stand-alone digital holographic microscope. 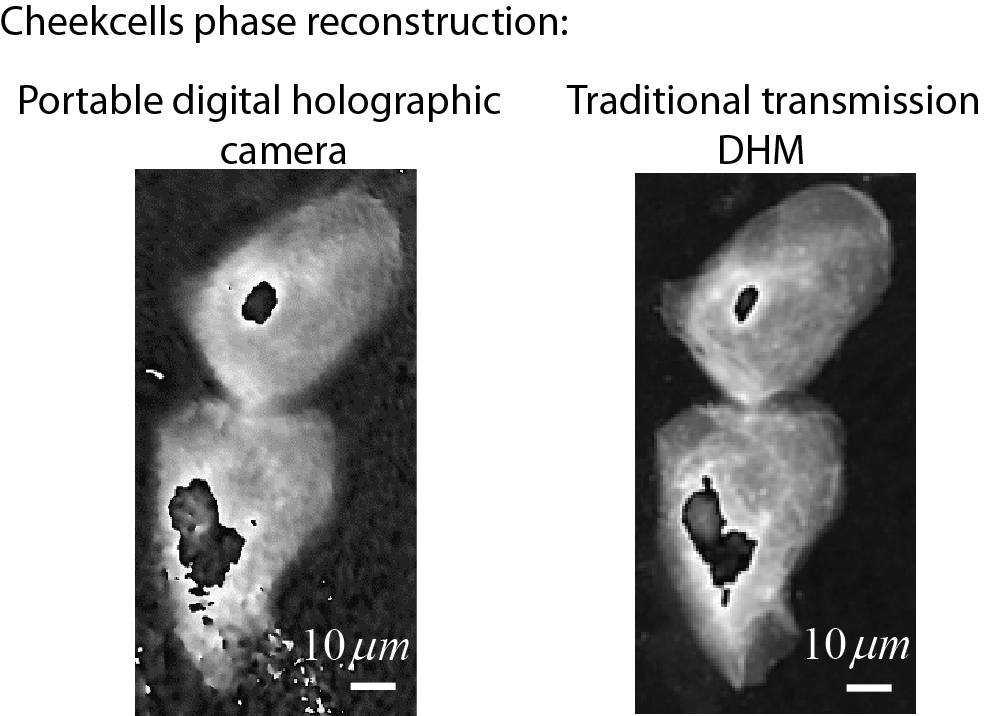