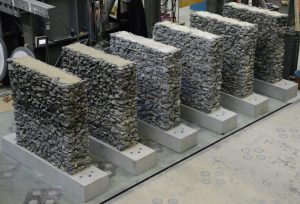 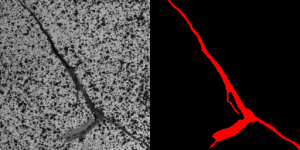 Dataset of cracks on DIC images 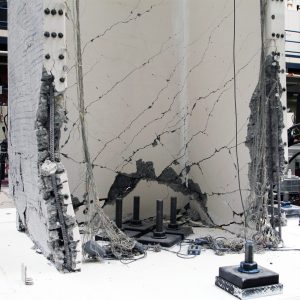 This dataset contains the experimental data for two large-scale reinforced concrete U-shaped wall specimens tested at the Earthquake Engineering and Structural Dynamics Laboratory (EESD Lab), École Polytechnique Féderale de Lausanne (EPFL) in Switzerland.  This dataset contains supplementary material for the journal paper titled, “Seismic Performance of Slender RC U-shaped Walls with a Single-Layer of Reinforcement”, which contains some of the experimental observations and results.  Thus, this dataset also contains MATLAB files associated with calculating the results presented in the journal paper and the corresponding figures and plots. 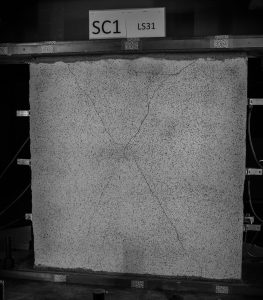 This dataset contains the results of six quasi-static cyclic shear-compression tests performed on single-leaf stone masonry walls made of limestone blocks and lime-based mortar joints. Of the six walls, four are tested under different axial load ratios, performing a cyclic load history with two cycles per increasing drift demand. Three are tested under the same axial load ratio but are subjected to different load histories, namely, one monotonic loading, one cyclic loading with two cycles per drift level and one cyclic loading with one hundred cycles per drift level. 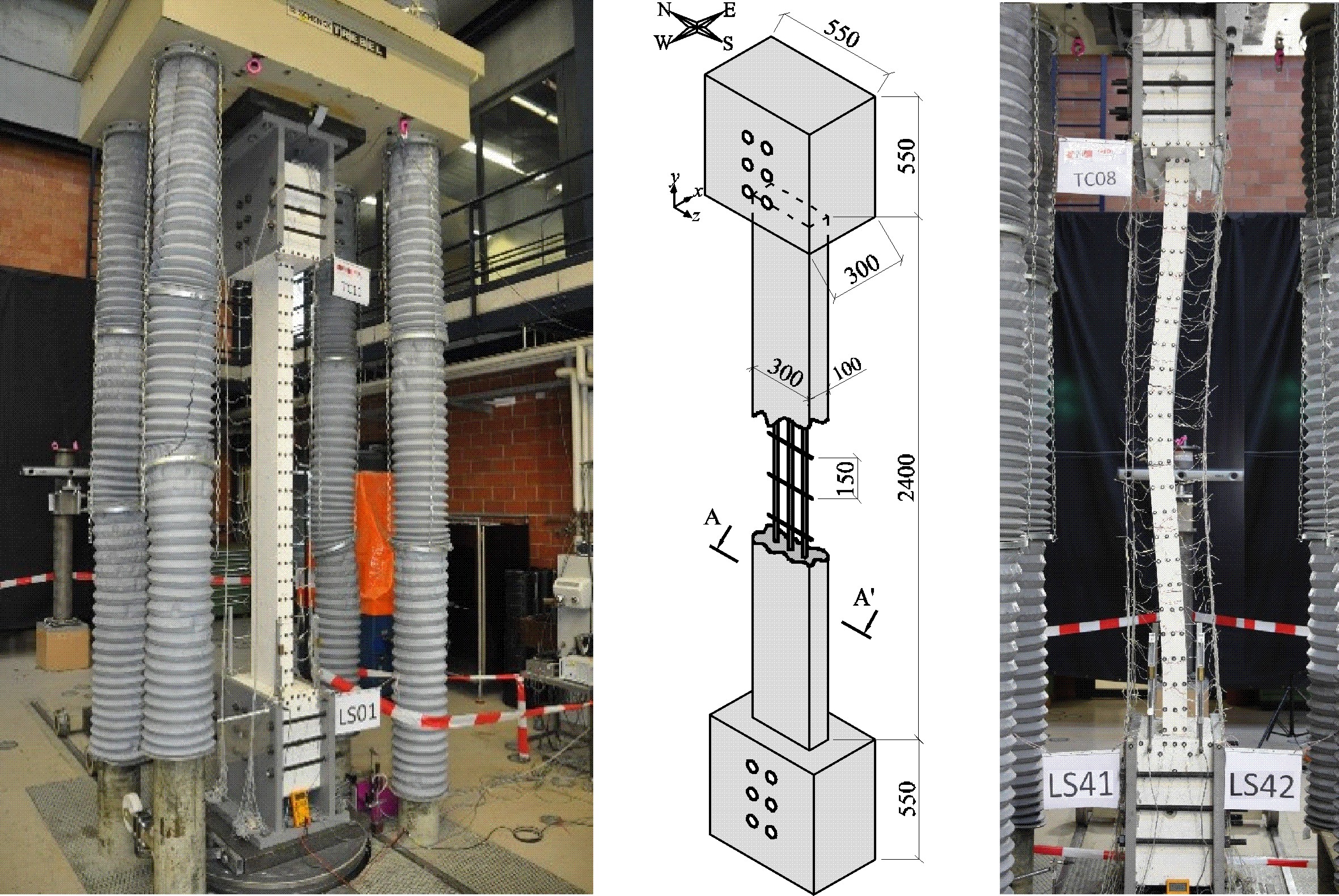 Core walls are often used to provide horizontal stiffness and strength to mid- or high-rise buildings. The design practice is, however, largely based on findings from tests and analysis of rectangular walls subjected to uni-directional loading. Two quasi-static cyclic tests on U-shaped walls were conducted in which the walls were loaded in the diagonal direction. These tests highlight that the diagonal loading direction is critical for the following reasons: (1) The strain gradient across the wall width promotes out-of-plane buckling of the boundary elements in the flange ends; (2) Plane section analysis does not yield reliable moment capacity estimates for the diagonal loading direction and (3) under diagonal loading the compression depth in the flange end boundary elements is larger than for the other loading directions, exposing unconfined concrete to large compressive strains. The test data comprises conventional and optical measurement data as well as results of material tests.

The test series investigates the influence of the wall thickness on member stability, the role of lap splices on damage distribution and displacement ductility, and the effects of simultaneous out-of-plane loading on the member response. The tests are unique with respect to the following aspects: TW1 and TW4 are the first tests on RC walls that developed large out-of-plane displacements along the wall height for which the entire 3D displacement field was measured. TW3 is the wall test with the largest lap splice length to shear span ratio documented in the literature and  therefore the influence of the moment gradient on lap splice performance. Wall TW5 is geometrically and mechanically similar to unit TW2, but was loaded under bi-directional loading (with a larger shear span ratio). Test units TW4 and TW5 are one of the first bi-directional wall tests on nearly rectangular walls and allow therefore to make an initial assessment of the impact of bi-directional loading on wall performance. 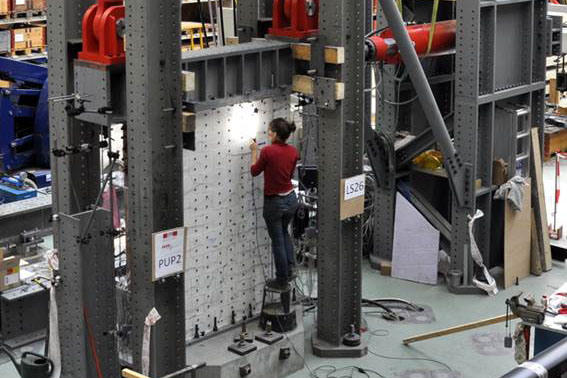 The URM walls were constructed using hollow core clay bricks and normal cement mortar. The main parameters investigated were (i) the shear span and (ii) the axial load ratio. Next to the global response parameters (applied forces, top displacement), also the displacement field was continuously measured by means of 4 LEDs per brick. 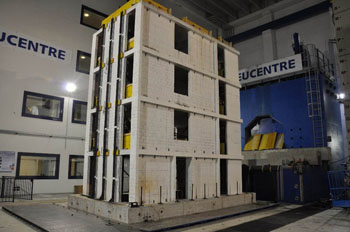 The test unit was constructed at half-scale and subjected to uni-directional shaking up to near collapse. The structure consisted of hollow core clay brick masonry walls and spandrels, reinforced concrete slabs and walls. It was instrumented using conventional and optical measurement techniques. The latter were used to record the displacement field of one of the URM walls. 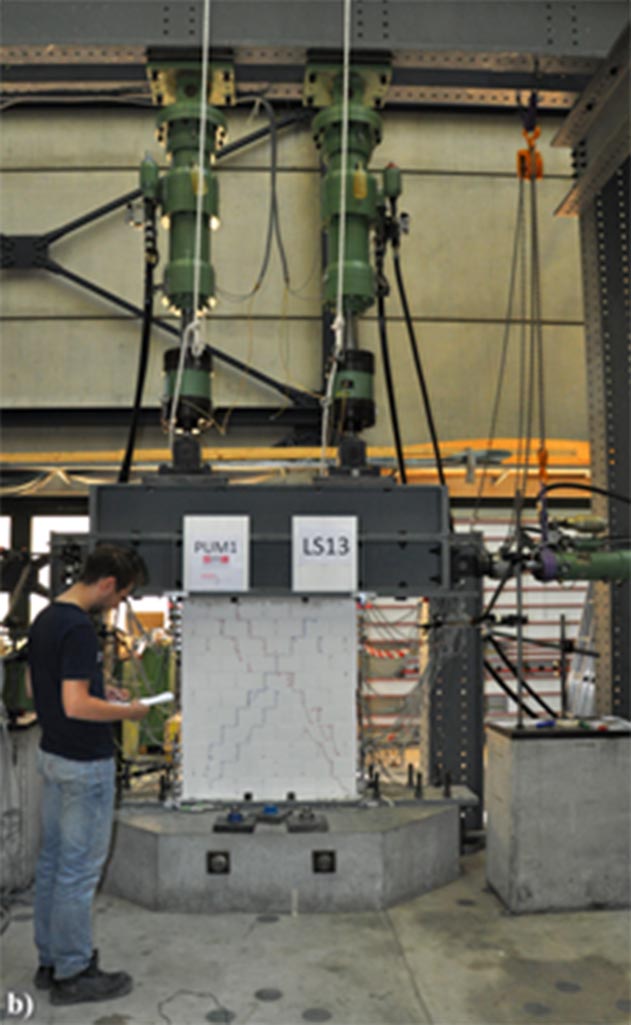 Scaling hollow core clay brick masonry poses several challenges and attempts in the past have shown that it is often difficult to achieve good matched with full-scale tests with regard to stiffness, strength and displacement capacity. As preparation for the shake table test, a half-scale brick was developed and five of the six full-scale tests on URM walls repeated (first data set). The experimental results show a good match between full-scale and half-scale masonry.

The test units were constructed at 2/3 scale and subjected to quasi-static cyclic in-plane loading. The test units consisted each of one RC and one URM wall, which were connected by two RC beams. The test units represent the lower two storeys of a four storey reference structure. Their behaviour was recorded using conventional and optical measurement techniques. 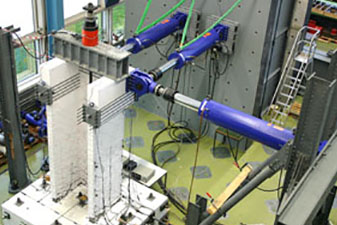