A Fission Reactor on Campus 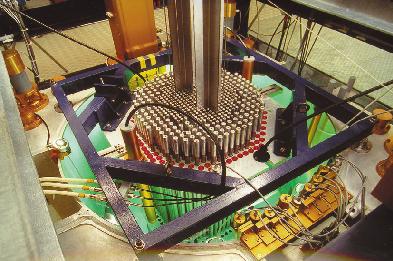 CROCUS is an experimental zero-power reactor, uranium-fuelled and water-moderated, mainly dedicated to teaching radiation and reactor physics. It is licensed for operating at 100 W, or a neutron flux of ~2.5•109 cm-2.s-1 at the core centre. Power is controlled either by changing the core’s water level using a spillway, or by two B4C absorber control rods, with an accuracy of ±0.1 mm (equivalent to approximately ±4 pcm) and ±1 mm respectively. CROCUS operates at room temperature using a controlled water loop with secondary and tertiary circuits, two heat exchangers and an electrical heater.

The core is located in an aluminium vessel of 130 cm in diameter and 1.2 cm in thickness. It is filled with demineralised light water used as both moderator and reflector. Its active zone has the approximate shape of a cylinder of about 60 cm in diameter and 1 m in height. It consists of two interlocked fuel zones with square lattices of different pitches:

Both uranium fuels consists of a 1 m pile of cylindrical pellets cladded in aluminium. The rods are maintained vertically by two octagonal aluminium grid plates spaced 1 m apart. The grids have a 0.5 mm cadmium layer to limit axial neutron leakage, with the active zone of the fuel starting above the lower cadmium layer.

The six independent safety systems consist of two cruciform-shaped cadmium blades and four expansion tanks. The safety blades are held by electromagnets for top to bottom gravity insertion. The expansion tanks trap air when valves are closed, allowing a fast drop of the water level when opened. Any of these systems allow shutdown in less than one second.